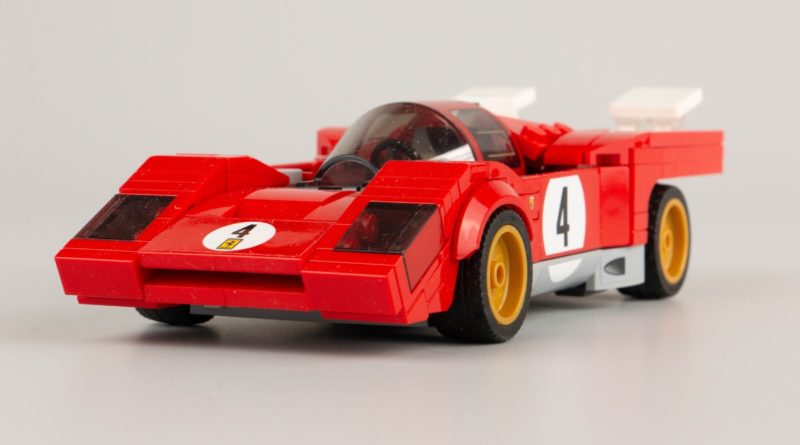 In among the range of modern-day hypercars, LEGO Speed Champions finds room for a vintage classic from Maranello with 76906 1970 Ferrari 512 M.

For some, newer is better and newest is best. They’ll always have the latest phone, dress in the latest fashions and have their finger on the pulse of what is ‘now’. Others, however, like to cast an eye backwards, knowing that as often as not, what is cutting edge now has only evolved from what came before.

These days, performance cars are designed in a computer, honed in a wind tunnel and shaped by physics to make them faster across the ground, grippier through the corners and more slippery through the air. But in that digitalisation of the creative process, have cars lost a bit of their soul?

Here we look at a car that was created on a sheet of paper rather than in a PC, and built by people who were born with a spanner in their hand. Sitting proudly alongside the exotica of today, the LEGO Speed Champions team have recreated a legend from more than 50 years ago: the Ferrari 512 M.

The Ferrari 512 M isn’t a car that’s particularly familiar to anyone who’s not a racing fan, but then looking back across the Speed Champions range, it doesn’t really do ‘common’. The 512 M (the M stands for modified) screams 1970s, with swooping curves, exposed rear wheels and a rear wing so large you could have a picnic on it, all finished off in that famous Ferrari Rosso Corsa (or red, to the rest of us). As is often the case, the build starts with the familiar Speed Champions chassis and then concentrates on the rear of the car to begin with.

Twin, fat exhaust pipes are soon topped with the iconic round Ferrari tail lights, and then the rear deck begins to take shape. This large, flat expanse houses the two small spoilers that differentiate the 512 M from the standard 512 S and, by and large, it’s all relatively straightforward construction here. Sitting in front of this is a V12 engine, represented by just a few parts but giving that distinctive ‘v’ shape. Throw in a handful of red and white plates and a smattering of stickers, and the back of the car is complete.

As bag two is opened and the build moves forward, you begin to see where the time was spent in designing this model. Unlike the flat, straightforward rear of the car, the front is dominated by sweeping wings incorporating those enormous headlights. The bodywork then curves down to the  gaping air intakes that cool the engine.

The front wings, particularly the headlight assembly, are almost worth the purchase price on their own. How a few dozen pieces, all with straight edges, can create a perfect curve is something you’ll be left wondering about long after the build is complete. The icing on the cake are two dark trans-clear 2×1 plates, printed with red, which provide the finishing touch to the lights far better than any sticker could.

The domed, printed canopy finishes the build, and while there are slight differences in the colour of the printing compared to the surrounding bricks, it’s a minor detail and not one that catches the eye.

Talking of printed parts, you do get six 1×1 plates printed with the famous Ferrari badge. Bizarrely, four of these are actually buried away inside the car, with just two showing on the flanks. Presumably they are so subtle that it would be far too easy to pick up the wrong piece, and then when you go looking for the printed plate you have the dawning realisation that you’re going to have to work back through a number of steps to retrieve it. Thank you, LEGO design team, for realising that some people get sloppy when they build.

Not us, obviously. Other people.

76906 1970 Ferrari 512 M includes a minifigure, resplendent in an all-white racing suit. The suit is open at the neck, showing a grey shirt beneath, and has zipped pockets and the Ferrari badge on the chest. Red pin striping down the edges of the jacket continue on to the legs, finishing this suit off nicely. The driver has a choice of tousled brown hair or a white racing helmet.

In a world where the price of LEGO sets only seems to be going up – recently we engaged in idle speculation about when we might see the first $1,000 set – Speed Champions continues to represent excellent value for money. An accurate representation of a classic car and, arguably, a tutorial in some innovative build techniques, all for less than £18 / $20 / €20.

You really can’t argue with that, making 76906 1970 Ferrari 512 M a solid recommendation for anyone with an interest in motorsport.

As LEGO sets go, this is about as close to a no-brainer as it gets. If you’re reading this then you probably have at least a passing interest in cars or motorsport, and 76906 1970 Ferrari 512 M is another gem in a series that has an embarrassment of riches. If we ask ourselves how much we’d pay to sit with a LEGO designer for an hour and pick their brains about build techniques, we’d probably come up with a fairly large number. But that’s effectively what you’re getting here. The fact that you’re also getting a beautiful model as well is almost secondary.

If you already collect Speed Champions, then don’t hesitate to pick this one up. If you don’t, then we can thoroughly recommend this as a great place to start. Just make sure you’ve got plenty of shelf space – you’ll need it.

Support the work that Brick Fanatics does by racing over to LEGO.com and building your Speed Champions collection using our affiliate links.

If you take your time to properly appreciate the build techniques of 76906 1970 Ferrari 512 M then you’re looking at somewhere around the 75-minute mark. There are two bags of pieces to work through and 16 stickers to apply.