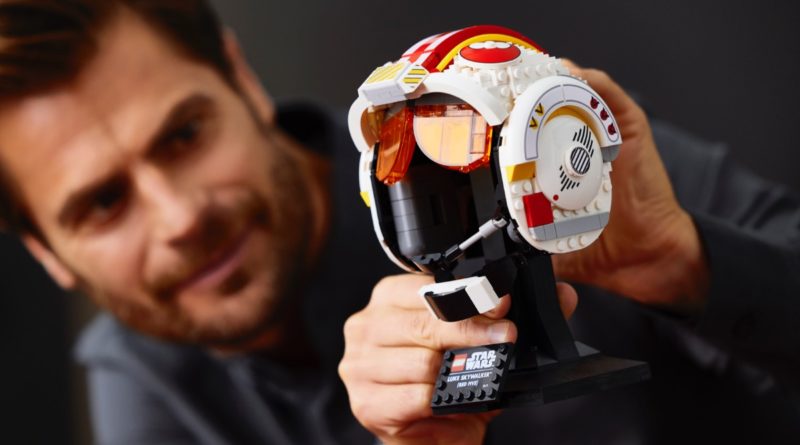 Initially unveiled by Amazon Poland before becoming available for pre-order earlier this week, the collection’s first open-faced helmet ultimately follows in the footsteps of the Batman cowls by eschewing any kind of brick-built face or head. But according to the designers responsible for bringing it to shelves, that wasn’t always the case.

“We did try different things, different solutions, trying to see which one would look better,” César Soares tells Brick Fanatics. “Of course, we looked at those Batman helmets too. But the thing with Luke’s helmet is that we were lucky in that sense, because it’s not only the helmet itself, it has the padding inside, and the mic, and the chin strap.

“That really helped the helmet look fuller [and] more composed. We tried different things, from building a minifigure head inside to making the stand thicker, but the rest of [the details] helped to finish the helmet off nicely.”

Adding a brick-built head would obviously have pushed the price of the helmet up considerably, too – as is, it matches the other two new helmets at £54.99 / $59.99 / €59.99 – but for the design team, it was mostly about keeping the focus on the helmet itself, rather than turning it into a full character bust.

“What we want to do is to try to give the builder the impression that you take this helmet off and put it on a stand,” explains Design Manager Michael Lee Stockwell. “[That’s] so you see the interior, because that’s just as much a part of the open-face helmet as the exterior is. Any attempt we did to try to fill the inside of the helmet out with something else didn’t seem to give the authenticity that we wanted.”

Of course, if you’d like to add a brick-built version of Luke’s head to 75327 Luke Skywalker (Red Five) Helmet, you absolutely can – just as plenty of talented fans have mocked up faces and heads for the Batman cowls. It’s presumably only a matter of time before somebody does the same for the X-wing pilot’s helmet…

75327 Luke Skywalker (Red Five) Helmet launches March 1 alongside 75328 The Mandalorian Helmet and 75343 Dark Trooper Helmet. All three sets are available to pre-order now. While you wait for your copies to arrive, check out our review of all three over on our YouTube channel.