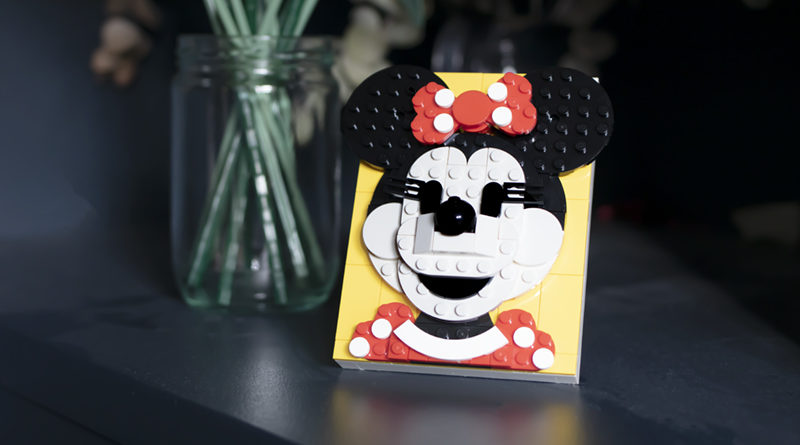 Mickey Mouse gets some company from his life partner in the latest wave of LEGO Brick Sketches – but will 40457 Minnie Mouse be able to distinguish itself enough to be a worthwhile purchase?

It may come as a surprise to learn that Minnie first appeared in LEGO form way back in 2000. The first sets she was included in were for the LEGO Baby theme (an offshoot of DUPLO), but in the 21 years since she has been represented by minifigures, BrickHeadz and even buildable statuettes.

Now, for the first time, she is available as part of the Brick Sketches theme – so where does 40457 Minnie Mouse rank among the LEGO versions of the world-renowned rodent?

The set’s 140 parts are spread across three unnumbered bags, with a separate bag for the four 4×12 plates that are used as the initial base for the sketch. As always with the Brick Sketches theme, the instructions give a little background into designer Chris McVeigh’s journey from AFOL to LEGO designer. It’s actually a very inspiring tale.

It should come as no surprise that the build techniques used for Mickey are also replicated for Minnie – after all, they share the same basic design. But there are a number of aesthetic changes to differentiate the two sketches from one another, the main one being that the background colour here is yellow as opposed to red. Again it’s a great choice as the black and white of Minnie’s face and the red and white polka dress really stand out.

The dress itself uses a rather ingenious part to great effect. Two red heart-shaped wedges make up either shoulder. It creates the perfect shape and looks incredibly effective. The dress is further built up using white 1×1 round tiles for the polka dot pattern and a white macaroni tile for the collar. Once they are all combined the dress looks excellent and very accurate to Minnie Mouse’s normal attire.

Her eyes, cheeks, neck and ears are all constructed from the same parts as Mickey, using exactly the same techniques. But where Mickey wears a bow tie around his neck, Minnie has a bow in her hair. Once again, heart-shaped wedges are put to great use for either side of the bow.

Perhaps the most ingenious method employed here is the black 1×2 grilles for Minnie’s eyelashes. Half of each grille is positioned over the white of the face, imitating long, luscious lashes, while the other half hangs over the black, almost disappearing into the rest of the model. It’s a really great effect.

The finished sketch looks fantastic and has just a little more detail than Mickey, but there are slightly more parts included with this set so it’s to be expected. On its own, 40457 Minnie Mouse looks brilliant – but placed next to 40456 Mickey Mouse, both Brick Sketches look brilliant, and are sure to be a talking point if displayed in a prominent position around the house.

If minifigures are your favourite part of a set, prepare to be disappointed as 40457 Minnie Mouse contains no figures, just a rather attractive head-and-shoulders build of Minnie Mouse.

When looking at the price you really have to consider what you are purchasing this for. As a display piece it feels priced just about right – but as an enjoyable, involved LEGO experience it seems a little expensive. There are only 140 parts, and the build is very straightforward.

While it’s not the most conventional of LEGO sets, there is still a lovely aesthetic to 40457 Minnie Mouse. The combination of smooth tiles mixed with studs is a great look and gives the unmistakable appearance of LEGO, but it’s still presented in a very unique style. As a relatively cheap and quirky display piece, especially when placed next to Mickey, it looks excellent.

On the downside, the build is over very quickly and experienced builders will probably complete this in less than half an hour – especially if you’ve previously tackled Mickey. The recommended age range is technically 8+, however, and those younger builders will likely get a real thrill out of seeing their favourite cartoon characters come to life in an incredibly unique way.