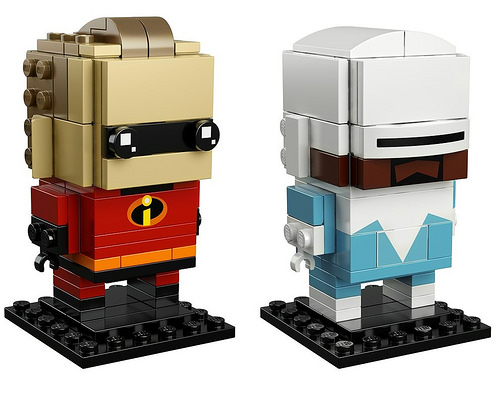 Clean images are now available showing LEGO BrickHeadz 41613 Mr Incredible & Frozone both in and out of the box.

Official images have been found showing the new LEGO BrickHeadz set inspired by the upcoming Disney Pixar release, Incredibles 2. 41613 Mr Incredible & Frozone includes two buildable characters, with the images revealed by Toys R Us Japan and spotted by the Brick Fan. The set has already been found in stores in the USA.

As well as the images, the listing shares the official description:

Build your own LEGO® BrickHeadz™ 41613 Mr. Incredible & Frozone from Disney|Pixar’s blockbuster Incredibles 2 movie, with this special double pack! Check out the crime-fighting duo’s super costumes and then display them on their baseplates for all your friends to see.

Other new LEGO BrickHeadz sets are based on Jurassic World: Fallen Kingdom and Back to the Future. Another new set was revealed today based on Justice League, 41610 Tactical Batman & Superman.