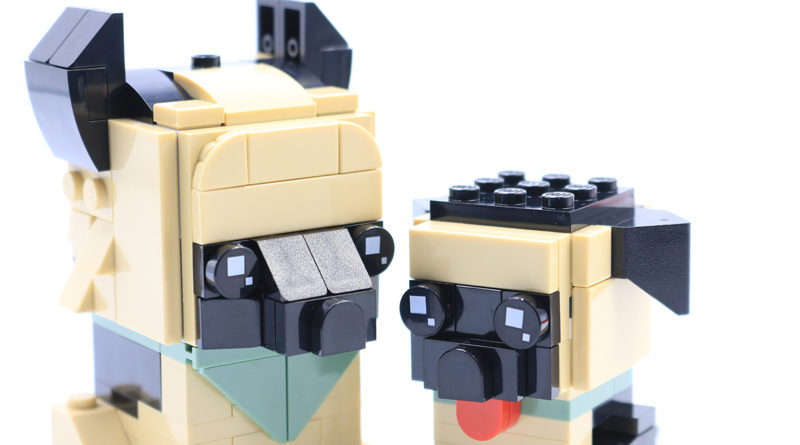 It’s raining cats and dogs in the first wave of LEGO BrickHeadz Pets sets, with 40440 German Shepherd serving up a couple of adorable canine companions to display on your desk.

Since their introduction in 2015, LEGO BrickHeadz have mainly been based on human characters, with the only exceptions being a few of the Disney and seasonal sets. Now though, the new Pets range is offering fans the chance to build their favourite animal friends as cute, blocky characters.

Kicking off the Pets line is 40440 German Shepherd. It’s actually a bit surprising that the designers chose this breed when French Bulldogs and Labradors are the most popular. However, German Shepherds are known for their loyalty, both in the home and in the line of duty, so this model is sure to stay on your desk – with no training required.

After opening all the bags, one thing that is quite striking about 40440 German Shepherd is how many traditional bricks are included. BrickHeadz always use some, but mainly rely on plates and tiles, so these parts prove that already this build will be a bit different. Starting with the top dog, the adult German Shepherd uses a range of light tan and black parts to create the synonymous coat pattern of the breed.

There’s a certain level of poseability too, as the hind legs are attached via hinged 1×2 plates, so the model can be posed in a realistic sitting position. Most dog owners should be able to relate with this – dogs can sit in some crazy, yoga-like positions on times.

Building up the body is similar to most BrickHeadz, but comes together even faster than its predecessors thanks to the aforementioned reliance on regular bricks. The finished model also feels quite a bit sturdier. One layer is dedicated to a sand-green bandana which is a nice touch, and parts collectors will definitely appreciate the triangular tile pieces.

The designers have clearly studied the facial markings of a real-life German Shepherd in order to achieve the iconic black and tan mask for the face. This is built separately on a 4×4 plate, on to which tiles are added, and the use of 1×2 roof tiles to create an angular snout are particularly effective.

For the puppy, some of the same techniques are applied, just at a smaller scale. It’s a bit fiddlier because there are a lot more 1×1 bricks to neatly line up to create the legs and the frame for the head. Using a red half-circle tile makes for a cute lolling tongue, whilst angled roof bricks create floppy ears. German Shepherd pups technically have pointed ears, but a quick rotation of the bricks corrects this easily.

Instead of a stand, 40440 German Shepherd has a basket for the dogs to be displayed in. Curved bricks encircle a base of multiple plates, and although it’s not very realistic (you would’t find a dog bed that size in a pet store), it is nice to display the finished BrickHeadz within.

40440 German Shepherd comes with no minifigures, but it could be said that the whole figures are characters in their own right. Dog owners will definitely find relatable traits in these LEGO versions; from LEGO tails that can be wagged to the alert, pricked ears of the adult.

40440 German Shepherd is very good value for money, with a quick yet fun building experience that creates two models and a stand. The paw print and bone details on the basket are stickers and not printed pieces. but this is the only complaint with regards to the price, and it’s pretty inconsequential.

The new LEGO BrickHeadz Pets theme adds yet another avenue to this already diverse range, and it’s sure to be popular among animal fans. Dog lovers and especially German Shepherd owners should love this set, and it would be pretty easy to customise 40440 to look more like a beloved pet, perhaps by changing the bandana colour or something similar.