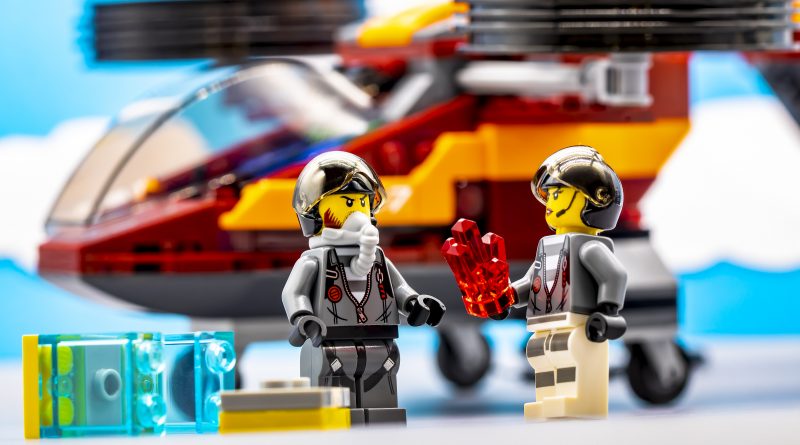 A new crime group, the Ravens, are terrorising the skies above LEGO City and 60209 Sky Police Diamond Heist gives fans the chance to build the Raven’s own airborne vehicle, a futuristic looking twin rotor helicopter. For the Sky Police there’s a Police transporter complete with working siren (a new feature for 2019) and removable diamond safe. A winged jet pack and four minifigures, two Sky Police officers and two Raven crooks round out the set. 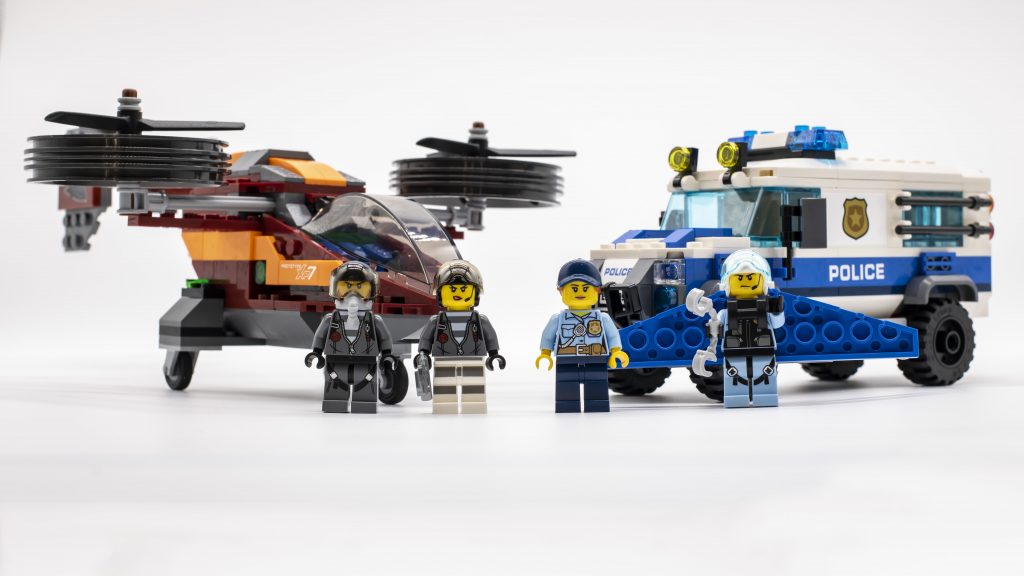 The winged jet-pack and helicopter are hardly the most realistic of vehicles for cops and robbers, but this isn’t a sub theme that’s supposed to be grounded in realism.  First and foremost they’re designed to be fun, initiate play and stimulate the imagination of younger fans. In that respect this set definitely succeeds.

The winged jet-pack comes together very quickly but the helicopter is a little more involved. As this set is aimed at a 6+ audience don’t expect to find any advanced techniques. It is still fun, but ‘mature’ fans looking for a deeper building experience will want to look elsewhere.

Despite the simplicity of the build there are nice design elements scattered throughout. The way the side detailing of dark red wedge plates and orange tiles lines up with the orange 1×4 bricks on the side looks really great, as do the two giant rotor blades either side. The only negative is the actual connection of the rotor blades, a single technic axle attaches to a Technic 1×2 brick, it feels very flimsy and looks slightly unfinished.

Apart from that the overall shaping is excellent and when finished it is a decent size too. The colour scheme of dark red and orange compliments each other and ties in with the rest of the Raven’s vehicles in the theme.

The included play feature, a rope used to steal the diamond safe, consists of a 2×2 round tile with eye and string with end studs and is fun to use. Swooping the helicopter above the police transport, the rope attaches to the top and takes half the roof and diamond safe with it – it is quite the dramatic heist.

The Sky Police transporter is an equally straightforward build utilising large plates to quickly build up a sizeable floor space. As with the helicopter, there are pockets of smart design throughout not commonly found on other City sets, which makes for a welcome change. The front bonnet and back door section are nice little sub-assemblies and the way the back clips to the transporter integrates really well with the overall design. A single crook can be placed in the back ready to take to jail.

The finished build looks bulky, weighty and well armoured. It also utilises a brand new element for 2019, a working siren brick. It is not the loudest of things (parents everywhere can breathe a sigh of relief) but it definitely adds a lot to the play value of the set.

There are four included minifigures. Of the two female figures, the female crook looks the best, her jacket is particularly great. The female police officer, while looking okay, uses parts commonly found in other police sets so is nothing special. The two pilots both feature the new exquisitely printed flight suits. The jetpack pilot’s is a bright light blue, found in other Sky Police sets, but the helicopter pilot wears a dark bluish grey flight suit that is exclusive to this set. He comes with the new oxygen mask accessory but there is a spare included too (thanks, LEGO team).

Overall this is a set that is simple yet fun to put together. There is a clear story and having vehicles and minifigures to represent both the Sky police and Raven crooks allows for a ton of play possibilities. Older fans may be disappointed by the simplicity of the builds, but those willing to overlook that are sure to enjoy this. 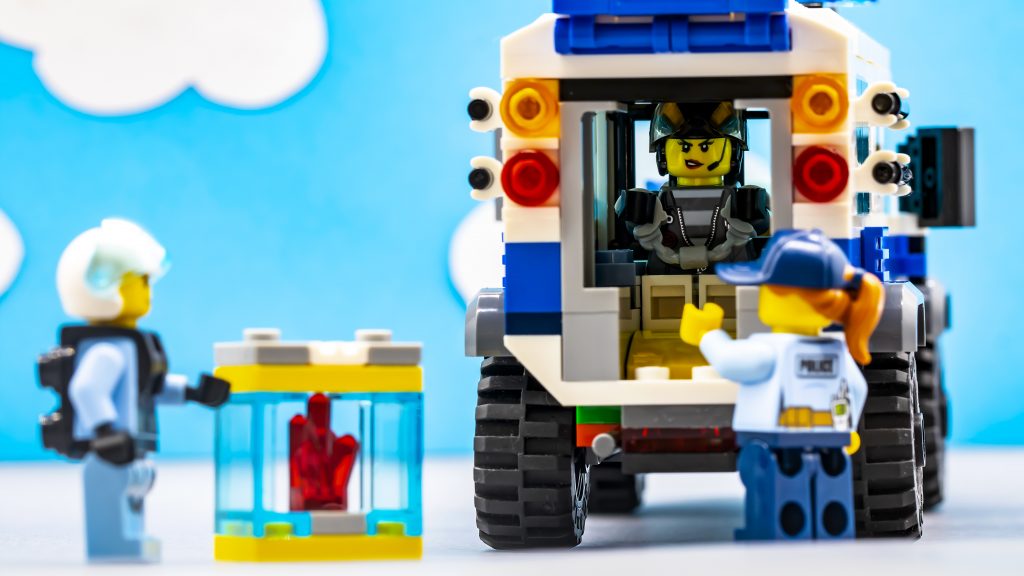