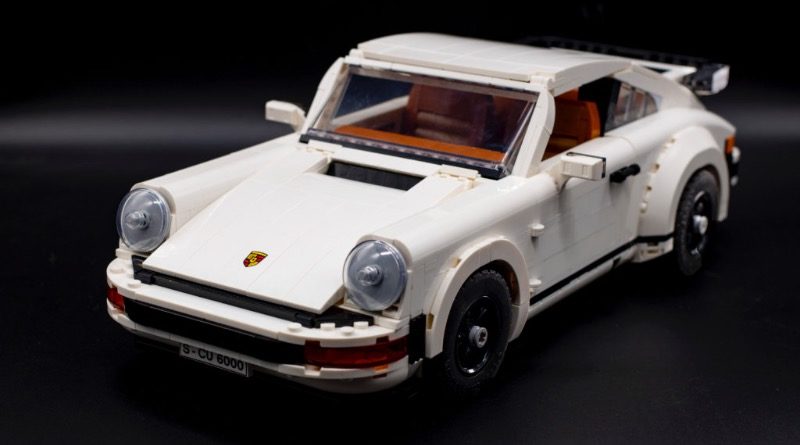 Will this year’s Creator Expert automotive release, 10295 Porsche 911, be a faithful and deserving recreation of the one of the world’s most iconic and recognisable sports cars?

LEGO fans are treated to a few annual traditions, and the release of an iconic, sleek, stylish, and large-scale Creator Expert (now 18+) vehicle is among the highlights. As each year passes, the bar is continually raised – both from the level of creativity demonstrated within the build, and the overall accuracy of the final model.

10295 Porsche 911 continues this trend, presenting fans with not only a model exhibiting smart design, clever parts usage and unique building techniques, but also grants the opportunity to build not one, but two excellent variations of the classic Porsche 911: the souped-up Turbo, or the sleeker top-down Targa.

From the designer interview in the first few pages of the manual, it’s clear that this model was a passion project that posed a real problem: how to recreate the distinct and iconic shaping and sleek lines of the 911’s front bumper, headlights and curved bodywork. Three designers’ brains were put to the test, and after five different versions they were finally happy with this final design. The ultimate question is: did they get it right?

The first few pages of the hefty instruction booklet contain a potted history of the world-famous automotive legend. Accompanied by beautiful imagery and inspiring quotes, it establishes exactly why the Porsche 911 is one of the most important motor vehicles ever created, as well as generating excitement for the build that’s about to come. As a nod to the country of origin of the Porsche, the manual is in both English and German.

Unlike other Creator Expert sets, 10295 Porsche 911 offers two builds in one. Of course, both can’t be built at the same time, but with a few tweaks to the base model you can either have the powerful Turbo 911, complete with rear spoiler and chunky rear wheel arches, or the open-top, sophisticated Targa. The first seven bags have all the pieces needed for the base model. Bags eight and nine contain everything needed to make the Turbo, and the parts in bag 10 will create the Targa. It’s a novel twist to an established theme and offers more longevity than most other sets.

Regardless of the specific model, the Porsche 911 is famous for its distinctive curves and angles, and as a result a number of new pieces and recolours have been introduced in this set to capture these effectively. White 10x2x2 left and right wedges and white corner 5×5 bricks are brand new parts, while there are also a plethora of recoloured elements, including black and white 1x1x2 brackets, trans-orange 4x1x2 sloped curves, white round corner 3×3 plates and a sizeable collection of pieces seen in dark orange for the first time. Printed parts make up the rest of the exclusive pieces, and unusually there is no sticker sheet.

Designer Mike Psiaki has been responsible for a number of Creator Expert vehicles, and as a result fans have come to expect a high level of creativity, unique parts usage and smart design from his builds. This set is no different, continuing to improve and enhance on some previously employed techniques as well as introducing some unique and exciting approaches not seen before.

After the fairly straightforward job of constructing the frame, it’s on to the pleasure of slowly building up the bodywork and interior details, most of which consists of a number of clever sub-assemblies that fit together in oh so satisfying ways. An ingenious use of the 2×4 curved tile helps connect the framework to the rear angled roof section. 1×1 round tiles with pin holders are connected into the top of Technic bricks reversing the direction of the build, allowing for exposed studs to connect to the rear wheel arches (the Turbo and Targa have different wheel arches, so this section needs to be easily swappable).

A 1×2 plate with pin hole on top is put to creative use when building the top of the wheel arches. A small sub-assembly sandwiches two of them on either side of large plates, with 1×2 plates with clips attached. This allows for a small amount of movement within the sub-assembly, creating a very slight dip. It’s ingenious, as the same small angle would not be possible with a standard connection. At almost every stage there are these wonderful little pockets of design perfection.

This extends to the interior sections. The front seats use 3×3 corner plates to create a beautifully curved shape. Each seat is constructed separately and attached to a hinge cylinder, which allows them to swing forward, as in the real vehicle. It’s an unnecessary feature but very much welcome, not to mention a highly creative and enjoyable design. A small handbrake and a working gear stick add some fantastic and accurate detail – it’s a testament to the creativity of this set when even the simplest thing like the design of a gear stick can bring a massive smile to your face.

If this isn’t your first Creator Expert car, you may feel a sense of familiarity with the way some of the components of the model are put together in the latter stages of the build, but that is in no way a negative. If it ain’t broke…

Unlike its predecessors, however, once the basic bodywork is finished you’re presented with a choice: do you finish the build by constructing the Turbo or Targa model? Building either is more involved than you might think. From first glance, it seems a simple swap of the roof is all that’s needed to change from the Turbo to the Targa, but you’ll soon realise that there are a lot more differences between the two.

Enough has been said about the quality and creativity of the build, and it certainly continues while finishing off the Porsche to either variation. It’s probably more beneficial to list the differences between the cars, which will hopefully help you decide which one to build and display.

The Turbo is obviously a more powerful version of the 911, hence the name. To ensure better control of this power, the Turbo was fitted with larger rear wheel arches (the new 5×5 curved bricks are used here) as well as the iconic rear spoiler (another incredibly smart and satisfying sub-assembly). The roof and entire back section feels more solid, and the engine is meatier and looks more powerful. In fact, everything about the Turbo feels souped-up.

In comparison, the Targa has a more elegant and sleeker feel. The rear wheel arches are smaller and match those at the front; there’s no rear spoiler; and the entire rear windshield area is constructed from transparent pieces. The soft-top roof can be taken off with ease, then stored in the front hood. The Targa features the iconic roll bar at the rear, and finally the engine is vastly stripped back.

In terms of appearance the Turbo version probably just pips the Targa to the post. There’s just something about it that feels instantly iconic. Of course, both versions are legendary, but if you think of the Porsche 911, the Turbo is probably the one that springs to mind first. That’s not to take anything away from the Targa, as both cars exude utter class and sophistication, and either one will look excellent on display.

No minifigures are included within this set, but that’s okay, as the star of the show here is the Porsche itself.

Compared to the other Creator Expert cars that have come, gone and are still on the market, the 10295 Porsche 911 is incredibly competitively priced.

Thanks to the 2-in-1 nature of the set, the Porsche 911 actually contains more pieces than some similar models (10262 James Bond Aston Martin DB5 being one example), but comes in at a cheaper price – yet nothing has been sacrificed as a result.

The build is just as satisfying, if not more in some areas. There is an abundance of new parts, and most importantly the final model (especially the Turbo version) is really quite stunning. The sleek manual, the lack of stickers and the exclusive printed parts make this feel like a premium product, but one with a very respectable price tag.

If you asked us to sum up 10295 Porsche 911 in three words, they would be ‘ingenious’, ‘intriguing’ and ‘delightful’. The build experience is an utter joy from start to finish – the myriad sub-assemblies offer surprises with every step, and connect together in exactly the kind of pleasing and intelligent ways that makes LEGO the special building medium that it is. Both models are absolutely exquisite when completed, and there’s a massive sense of satisfaction at having built them.

The 2-in-1 format of this set also makes for a compelling purchase, as it’s not often that sets of this size and price allow for more than just one model to be constructed. Even if you prefer one over the other, taking the Porsche back to its base model and reconfiguring to either the Turbo or Targa only takes around half an hour, so we recommend building both before deciding on which one to stick with.

The price is very attractive, especially considering how enjoyable the build is and how fantastic the final models look, and there is more than enough here to offer something new for even the most ardent of fans. In case you hadn’t worked it out yet, 10295 Porsche 911 is a set that is well worth purchasing and adding to your LEGO garage (or shelf).

This set was not provided for review by the LEGO Group – we bought it ourselves, and you should too.

You can support Brick Fanatics while doing so by picking up 10295 Porsche 911 using any one of our affiliate links. Thank you!

There are seven bags to work through in 10295 Porsche 911 before the base model is completed. It’s a very involved yet enjoyable build, and will probably take around three and a half hours to finish, while the additional stages required to turn the base model into either the Turbo or Targa will then take another half an hour.

10295 Porsche 911 is the largest LEGO System Porsche created to date, and contains a total of 1,458 pieces. You won’t use all of those at the same time in either of its two variant builds, however.

Whether you build 10295 Porsche 911’s Turbo or Targa variant, both cars have the same specifications, measuring 10cm high, 35cm long and 16cm wide.