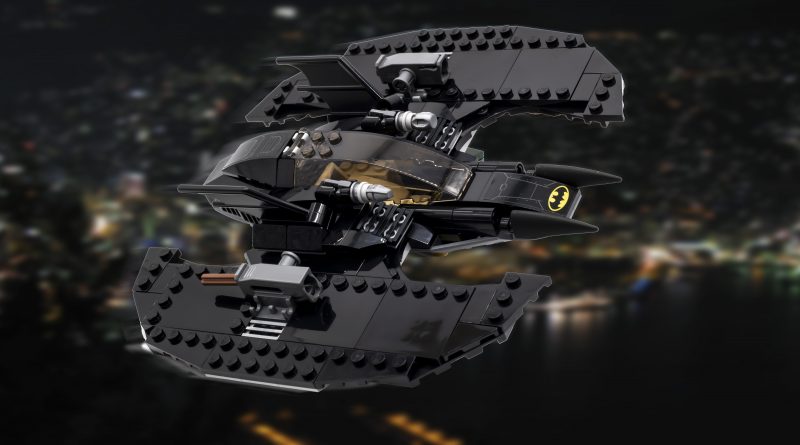 76120 Batman Batwing and the Riddler’s Heist is an action packed set containing 489 pieces that builds not one, but three vehicles. Rather than just the titular bat-vehicle and a villain vehicle, the set builds Commissioner Gordon’s police car, the Riddler’s Helicopter and Batman’s iconic Batwing – this version bears more than a passing resemblance to the one flown by Michael Keaton in Tim Burton’s 1989 Batman, which is 30 years old this year.

Four minifigures are included – Batman, The Riddler, Commissioner Gordon and Shazam, who seems a little out of place, but DC fans will no doubt love his inclusion.

The set begins by building the only land based vehicle of the set, Commissioner Gordon’s police car. Fans used to building cars in the LEGO City theme will be pleased to know there are some different techniques utilised during the assembly of this vehicle.

The frame and axles are two separate pieces connected together, rather than the usual single piece frame. A 2×2 curved brick at the front is also fairly unusual and even the wing mirrors, made from 1×2 plates with arms and 1×1 tiles with clips, feel fresh. It is always pleasing to build such a common vehicle but in a slightly different way. Unfortunately the overall look is incredibly blocky and slightly strange.

As LEGO cars go, this is fairly odd looking – even for a car based within a comic book universe. The amusing ‘Go-2Jail’ license plate sticker genuinely brought a smile to my face though.

The Riddler’s helicopter does not make much of an improvement on the design aesthetics of this set. Three separate assemblies are required to complete the villain’s chopper.

The skids are one large single piece to which the rest of the chopper’s cockpit is built upon. It is a very simple build with just a few nice pockets of detail, such as the rear engines made from 1×2 cones and the brown seat made from a 2×3 slope and 1×2 tiles. The tail section is made of a green girder with Riddler question mark stickers applied to each side, before the rotor blades are attached to the top. Once finished it is hard to shake the feeling that it is somewhat on the basic side, especially when viewed from certain angles.

Surprisingly, the brick built safe is actually a very smart build. A clever locking mechanism made of a Technic crank shaft attached to the door, which has to be positioned in just the right way to open, really captures the feeling of trying to crack a safe.

While the helicopter and police car are slightly disappointing builds, the star of the show – the Batwing – is a little more involved. The familiar wings take shape very quickly, using 4×4 black plates with curved cutouts and wedge plates to create the necessary angles and curves.

A mix of plates and tiles help to add sleekness to the design of the wings. Further wedge plates are then used, which create seamless angles that run from the wings down to the main fuselage.

What is more, this Batwing is armed to the teeth. A huge array of weaponry can be deployed including grenade launching stud shooters and a multi shooter that can shoot tiles or studs depending on how much destruction Batman wants to rain down on his enemies.

The final look is great, helped by some stickers, and the finished model is incredibly swooshable too. It really is a great LEGO rendition of the 30-year-old design.

Of the four included minifigures, Commissioner Gordon is the most detailed. The printing of his brown overcoat extends down onto his legs and looks really decent. He also has two facial expressions, slightly perplexed and angry, both of which are really well done. It’s somewhat strange that he is the best minifigure of the set, but his character is as old as Batman himself and he was the first supporting character to ever be introduced in a Batman comic, so perhaps he deserves the chance to shine.

Batman does not offer anything new to fans but the printing on the torso is still really well done. The Riddler is disappointedly basic, with plain green legs, minimal torso printing and just one facial expression. Shazam is exclusive and while his legs are plain, his facial expressions and torso printing is pretty strong. The ability to shoot lightning bolts from his hands is also a pretty cool and unique feature.

76120 Batman Batwing and the Riddler’s Heist needs to be looked at from two perspectives. The building experience and play value will keep the target younger fans entertained for a good while, but more experienced builders will most likely be left feeling a bit empty – especially when considering the price.

While from a play point of view the addition of the police car is a great thing, if it was a set that just contained the Batwing and Riddler’s helicopter both could have been more involved builds and more detailed models. The minifigures feel a little underwhelming and there are far better LEGO Batman sets currently available – they are not all cheaper, but they are almost all better value.

76120 Batman Batwing and the Riddler’s Heist is available now at LEGO.com. You can help support Brick Fanatics’ work by using our affiliate links.