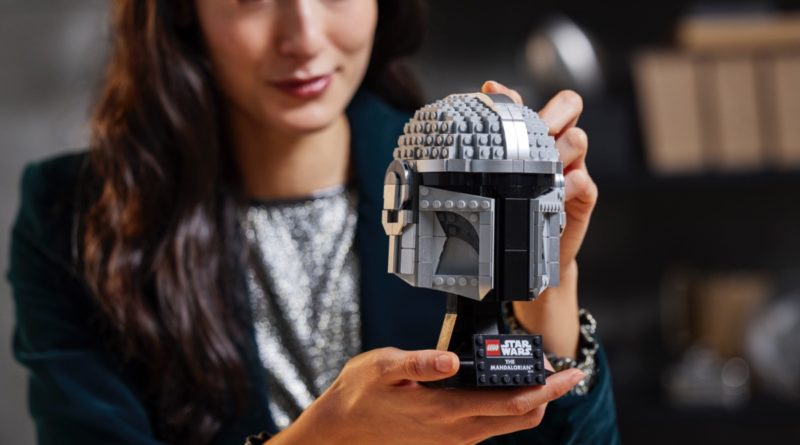 The LEGO Star Wars design team explain how they balanced the lack of colour in 75328 The Mandalorian Helmet – and why it isn’t entirely silver.

Where the LEGO Group’s first Mandalorian helmet – 75277 Boba Fett Helmet – is awash with colour, mixing together sand green, dark green, dark red and yellow elements, Din Djarin’s headgear is a little more muted. That’s because the on-screen character’s helmet is basically entirely silver, creating a real challenge for the Star Wars design team: how do you convey detail with a single colour?

The answer is by using more than one colour, as you can see in the finished product that is 75328 The Mandalorian Helmet. While most of the build is anchored around light grey and black, there are splashes of drum-lacquered silver and dark grey that help to break up the visual monotony of Mando’s helmet.

“We did quite a few studies to try to figure out how we would best achieve the contrast between light and dark,” Design Manager Michael Lee Stockwell tells Brick Fanatics. “The reflective surface is mostly characterised by the surroundings of what that surface is in, so we knew we had to try to create that in the build somehow. And we tried some different things, like asymmetrical shadowing, [in deciding what] worked best for us.

“Then it was about finding out which areas of the helmet had the highest, lightest and most reflective values, and which had the deepest, darkest, shadowy values, and to try to see whether or not we can capture that by using different tones.”

From there, Michael says it was basically ‘trial and error’ to figure out the right mix of shades and colours. “It’s studying the reference images versus what you’ve got, putting the model in different lighting. It’s back and forth. This final result is far from the first attempt; we made a lot of different attempts at it.

“When you’re working with one colour, creating detail and depth can be difficult. We do it all the time in multicolour models, but we don’t think about it as much when we’re doing monochrome things. That’s why we felt this added to the model rather than detracted.”

That highly reflective surface of Mando’s helmet is a luxury afforded to him by his Beskar armour – but one that can’t also be afforded to its LEGO version, which uses drum-lacquered silver very sparingly. An entirely metallic helmet would not only have likely blown the budget, however: it would also have failed to meet the LEGO Group’s quality standards.

“LEGO is something that we hope people are going to use to rebuild other things with, and we know that if you connect two elements together repeatedly that are drum-lacquered that have studs, you will gradually wear the finish off,” Michael explains. “And that we don’t perceive to be the best quality. So therefore, in almost all cases, we restrict ourselves to only metallising elements that are without studs, because that way they can be reused without their appearance deteriorating.”

As is, 75328 The Mandalorian Helmet instead looks to strike a keen balance between the LEGO Group’s shades of grey, finished with those shiny silver elements wherever possible. You’ll be able to get your hands on it for yourself from March 1, but you can already pre-order it through LEGO.com, alongside 75327 Luke Skywalker (Red Five) Helmet and 75343 Dark Trooper Helmet.

In the meantime, check out our video review of all three new helmets by clicking here.