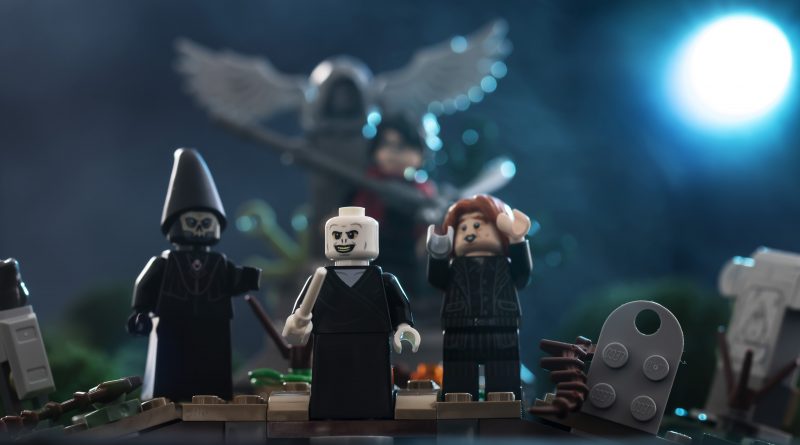 LEGO 75956 The Rise of Voldemort 75965 does a fantastic job of recreating an iconic scene from the Harry Potter franchise, but will this set please more than just the dedicated Potterhead?

Lord Voldemort (or ‘he who shall not be named’) is the main protagonist of the Harry Potter films, casting an omnipresent and menacing shadow over the first two films without ever being seen. It wasn’t until the fourth instalment, Harry Potter and the Goblet of Fire, that audiences finally got to see him in his terrifying physical form. 75965 The Rise of Voldemort contains 183 pieces that go together to form a brick built recreation of the Little Hangleton graveyard, where the Dark Lord first makes an appearance. The set also comes with four excellent and exclusive minifigures, and even includes Voldemort in his rudimentary state. What’s more it’s a set packed full of easter eggs and references that fans of the Wizarding World will no doubt love. 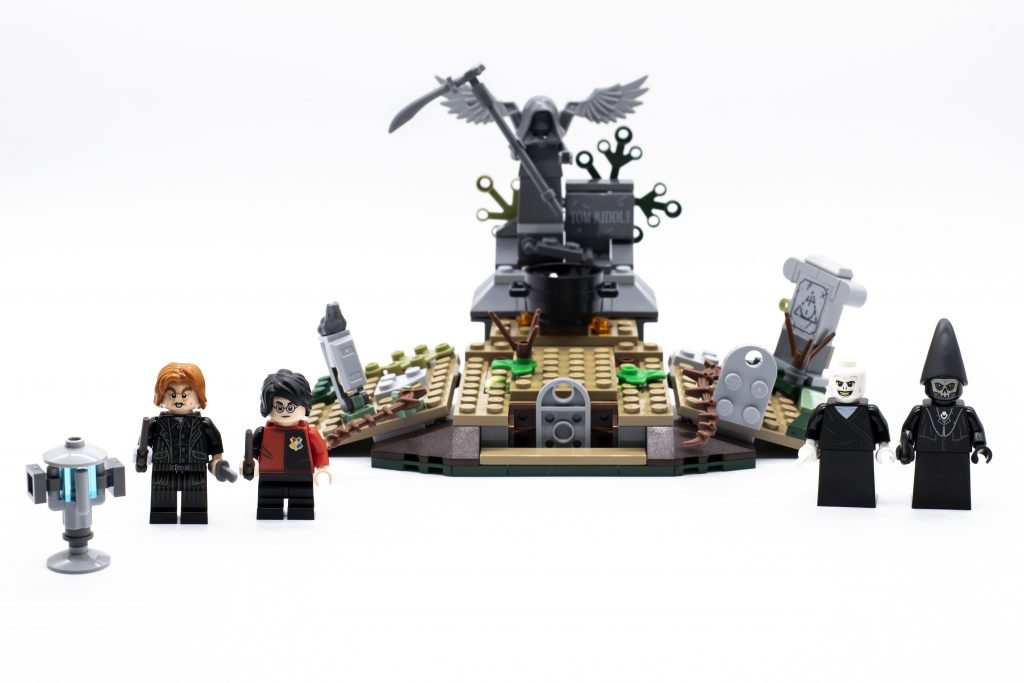 The build itself starts with constructing a brick built tri-wizard cup – a LEGO Harry Potter first. There was a replica cup included with Cedric Diggory in the first wave of licensed Collectible Minifigures but that was a single piece with no assembly required. This tri-wizard cup is a simple but clever build with fantastic shaping created by the trans-blue 1×1 brick that makes up the centre of the design. It’s an essential inclusion within this set as touching the cup transports Harry to the graveyard. Other references to the source material include the cauldron with representations of Harry’s blood, Wormtail’s hand, Tom Riddle Senior’s bone and a shrivelled Voldemort brilliantly represented by a reprinted and recoloured baby in papoose figure – if he wasn’t the most evil wizard that ever lived one might even say it’s adorable. There is a sticker to denote Tom Riddle’s grave, not as detailed as it is in the film, but it’s still great to have within this set and eagle eyed fans will love the inclusion of a sticker with the Deathly Hallows insignia printed on.

As for the build the entire set is built on two 14×2 plates with the graveyard setting at the front and Tom Riddle’s grave at the far end. The Angel of Death statue is well executed from plain dark bluish grey minifigure parts and sits atop the grave. It looks incredibly menacing and Harry can even be placed on the 1×2 plate with handles to make it look like he is trapped behind the scythe. There are a few brick built tombstones scattered around the set. The use of the 1×1 curved top piece adds great shaping to the larger one and the sticker helps to add that final bit of detail. The way it connects to the two 1×2 jumpers is also quite unique. The set’s colour palette of tans and browns is perfect to simulate the muddy, dirty ground of a graveyard. Dark green wedge plates, 1×2 jumpers and green plant leaves help to add splashes of colour and vegetation to the build, but the set comes across a little simplistic and unfinished in places due to the number of exposed studs.

Despite the slightly lacklustre build the play feature is actually really fun. The set is called The Rise of Voldemort and that’s exactly what happens when placing Voldemort onto the centre gravestone. Keeping him hidden underneath a hinged plate and pressing down on the centre tombstone will cause the Dark Lord to rise up from the ground. It works really well and is definitely the highlight of the set. Other than that, there really isn’t much else to the main build.

The minifigures are superb, which seems to be the case with most of this recent wave of Harry Potter sets. All four are exclusive and take advantage of some new-for-2019 parts. Harry is dressed in his tri-wizard tournament top. He has posable medium sized legs and an excellent hair piece that really captures the look of his on screen counterpart. Peter Pettigrew’s printing is actually pretty good with the stripes of his jacket carrying on to his legs. He has two facial expressions, angry and worried – presumably because of the horror he has just unleashed. He comes armed with a wand and a small knife. It may be accurate to the scene but there is still something slightly disconcerting about seeing a LEGO minifigure with a knife.

Both Voldemort and the Death Eater come armed with wands and use the newer style sloped piece for their robes. Voldemort has a simple printed torso, whereas the Death Eater’s is a little more detailed. Where they shine though is the excellent, and fairly terrifying, facial prints. The menacing look on the Death Eater’s skull really looks like the stuff of nightmares and Voldemort looks suitably evil and sadistic.

It cannot be denied that the LEGO Group treat licensed products with a lot of care and attention to detail, especially ones that recreate such memorable and iconic moments as 75965 The Rise of Voldemort. That said, the simplistic nature of the build, coupled with the slightly unfinished and messy appearance of the final design may put off casual fans. Those that love the world of Harry Potter will delight in the wonderful minifigures on offer and the references to the source material, especially at this price. For everyone else, there is LEGO magic to be had elsewhere.

75965 The Rise of Voldemort is available now at LEGO.com. You can help support Brick Fanatics’ work by using our affiliate links. 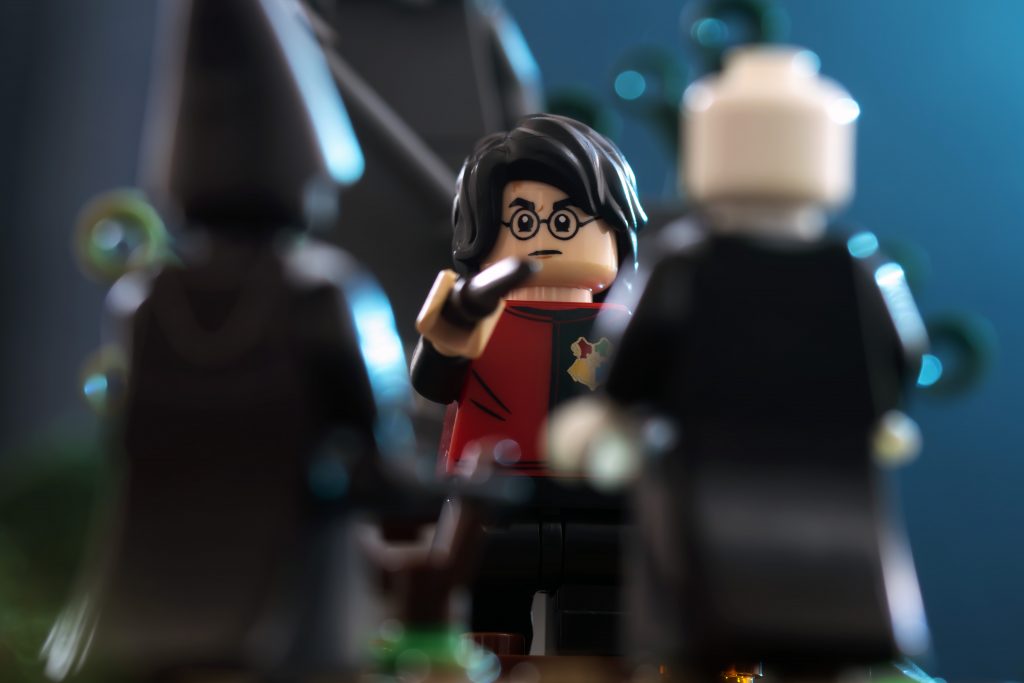