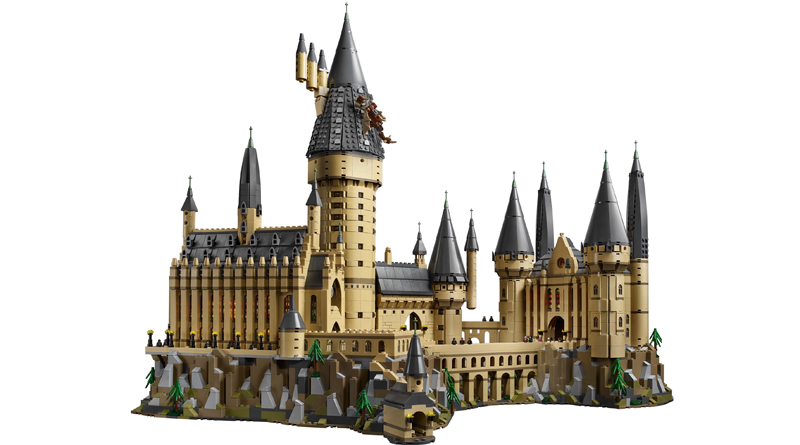 Brick Fanatics counts down the largest sets in the LEGO Harry Potter theme, one of the LEGO Group’s longest running and most magical licensed themes

When the LEGO Harry Potter theme began in 2001, the emphasis was on creating numerous little sets to represent key scenes with the ability to join them together. A few magical Technic pins could place Dumbledore’s office next to the Gryffindor common room or any other combination imagined by a young LEGO witch or wizard.

Due to the popularity of the theme, the sets quickly became a lot bigger, and the current reboot of LEGO Harry Potter is taking piece counts higher than a Nimbus 2000 can fly.

So Brick Fanatics has polished off the pensieve and is looking back at the five biggest LEGO Harry Potter sets yet, most of which are – unsurprisingly – a certain wizarding school…

As the Harry Potter films became darker in tone, so did the accompanying LEGO sets. This was particularly reflected by 5378 Hogwarts Castle, which used a very grey colour scheme, not seen before or since. If all those grey bricks weren’t moody enough, LEGO bats topped the spires, gargoyles loomed over the gates and thestrals made their debut.

One bright, very pink spot to this set was that until 5005254 Harry Potter Minifigure Collection in 2018, it was the only way to get the rule-loving tyrant of a professor, Dolores Umbridge.

It might appear quite crude by today’s standards, but 4757 Hogwarts Castle was only the second fully-realised iteration of the school in bricks. Inside it was barely furnished, with poor Professor Dumbledore’s office tucked away into a corner containing only a simple desk. However, it made up for this by having a very impressive minifigure collection – although for some reason Professor Trelawney had a pink wizard’s hat.

This was also one of the only iterations of Hogwarts to feature its clock tower and some of these design elements clearly influenced 75948 Hogwarts Clock Tower.

The final version of Hogwarts Castle to be released before the theme ended in 2011 (because the two lonely towers of 4867 Hogwarts don’t count) really incorporated a smorgasbord of easter eggs from every Harry Potter movie into one fantastic model. From the vanishing cabinet in the Room of Requirement, Sirius Black’s secret flame message to Harry, and the Forbidden Section of the library, it was designed for role-play.

Even now, 10 years later, 4842 Hogwarts Castle still stands the test of time and looks almost as good as the newer sets, which can’t be said of that many LEGO models.

In 2011, the LEGO Harry Potter theme went out with a bang that would have been approved by accident-prone Seamus Finnigan. 10217 Diagon Alley included three very different pieces of magical architecture: Ollivander’s wand shop, Gringotts Bank and Borgin & Burke’s. It is a truly engaging building experience, and to this day remains the only minifigure-scale incarnation of the magical street.

In fact, 10217 holds many accolades, including being the only Harry Potter set ever to include the Weasley twins. Hopefully one day the LEGO designers will give fans more stores like Flourish & Blotts or Quality Quidditch Supplies…

With its massive piece-count, 71043 Hogwarts Castle blows the rest of this list out of the water with a bombardia spell. At the moment it is also the second-largest LEGO set of all time. All previous iterations of Hogwarts had been at minifigure scale, so could only include a certain amount in one set, but 71043 managed to include almost everything seen on screen by being micro-scale.

Yes, there are scaling issues on the interior between some bricks, and the printing is a bit dark on the micro-figures, but there isn’t a more challenging, more rewarding or more movie-accurate Harry Potter set than 71043.