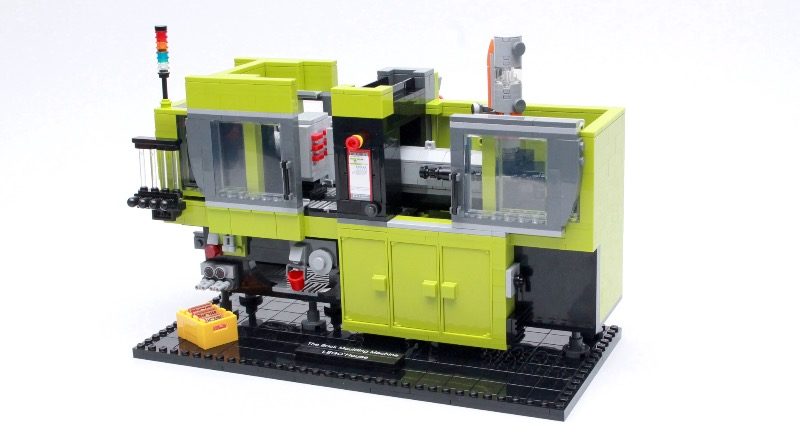 The LEGO Group is going super-meta for its latest LEGO House exclusive, 40502 The Brick Moulding Machine, which caters to a very specific subset of fans.

For a set that’s exclusively available in Billund, 40502 The Brick Moulding Machine makes pretty much perfect sense: this is the kind of niche model that’s only really going to appeal to the kind of person who’s willing to travel to the birthplace of LEGO, after all.

It’s not the only exclusive model currently on sale at the LEGO House, though – so if you’re in the midst of planning a post-pandemic trip (should a ‘post-pandemic’ world ever materialise), is it worth setting some cash aside for 40502 The Brick Moulding Machine, or would your luggage space be better spent on 40501 The Wooden Duck?

Unless you’re oddly familiar with the intricacies of industrial machinery, piecing together 40502 The Brick Moulding Machine is probably going to be a peculiar experience – at least compared to any other LEGO set you’ve ever assembled.

That’s because for most of us, spaceships, buildings and mechs are all familiar models. You know what you’re going to end up with, and as you click those bricks together, you’ll recognise exactly what you’re constructing without needing a degree in engineering.

Where 40502 The Brick Moulding Machine is concerned, though, much of the build will likely feel alien to you. In some ways, that’s fine – it keeps things fresh, after all – but you might find yourself feeling strangely disassociated from the experience. Even by the end of the build, you probably won’t really know what each aspect of the model is supposed to be without looking up the moulding machine’s manual.

Putting all those strange dials, pumps, grilles and bars aside, though, you’re effectively just building… a big, green box. What’s most surprising about it – given it is just a box – is that it’s weirdly flimsy at times during construction. When it all comes together at the end and sits on its base, it’s not going to fall apart by any stretch – but you might find yourself pushing things in and out of place while you’re assembling it, leading to a few moments of frustration.

That’s essentially a consequence of the design team’s efforts to move away from the moulding machine’s inherently boxy nature, whether through its sliding glass walls or the function that replicates the production of the LEGO House’s six red 2×4 bricks. Those moments are probably the most interesting aspects of the build (even if you don’t really know what you’re putting together at the time), fusing together simple techniques like offset jumper plates and a rotating crank mechanism.

Those red bricks are also what tie this set directly to its source material: each visitor to the LEGO House comes away with a polybag, 624210 LEGO House 6 Bricks, plus a unique instruction card containing one of the possible 915,103,765 combinations they can be assembled in. 40502 The Brick Moulding Machine includes three medium nougat tiles printed with the polybag’s design, reflecting its imminent switch to paper packaging.

It’s a welcome touch, and one that – as the final step of the build – does a great job of reminding you exactly where this set has come from. The rest of the build might not have made much sense to you, but it’s capped off by a handful of pieces that ultimately bring it full circle, and turn it into a true souvenir of a very significant location for any diehard LEGO fan.

And as we’ve already mentioned, that’s really who 40502 The Brick Moulding Machine is going to appeal to. The build can’t change that – if anything, it only reinforces it.

You won’t find any minifigures in 40502 The Brick Moulding Machine, which is a slight shame – someone to pick up the polybag tiles would have really rounded out the set – but also makes total sense, given this model isn’t really minifigure-scale.

You’ll need to hand over 599 DKK to pick up 40502 The Brick Moulding Machine, which at the time of writing is roughly equal to £69 / $96 / €81. That seems pretty fair for 1,205 pieces, particularly taking into consideration its recoloured doors and door frames (both in lime green for the first time), and those unique printed tiles that probably won’t pop up anywhere else.

If you’re making the trip all the way to Billund, though, the price probably won’t matter too much: this is a souvenir you can only buy at the LEGO House, so you’re not exactly going to be shopping around for it.

40502 The Brick Moulding Machine is branded as the second LEGO House Limited Edition set, and the LEGO House team tells us there’s a third on the way next year (if that wasn’t obvious). That means you’ll need to keep going back to Billund if you want the complete collection, so in this instance you might be better off cherry-picking the attraction’s exclusives based on what’s available when you arrive.

If you’re planning to make the pilgrimage in the next few months (or as international travel restrictions allow), your choice is between 40501 The Wooden Duck and 40502 The Brick Moulding Machine. Both sets tap into a very specific part of the LEGO Group’s history, but where the former still builds into a toy, the latter feels like something designed for an even smaller subset of fans than any LEGO House exclusive before it.

To that end, which one to buy really comes down to where your interests lie. If you’re angling for a more aesthetically-pleasing display model, you’ll want to hook 40501 The Wooden Duck. But if you’re more fascinated by the unique experience of building LEGO industrial machinery – even if the final result isn’t much to look at – 40502 The Brick Moulding Machine is the one to aim for.

This product was provided for review by the LEGO House team.

How long does it take to build 40502 The Brick Moulding Machine?

40502 The Brick Moulding Machine takes just shy of two hours to build across eight numbered bags. It’s a fiddly build in places, but the finished model is sturdy despite its moving parts.

How many pieces are in 40502 The Brick Moulding Machine?

40502 The Brick Moulding Machine contains 1,205 pieces, including several that appear in their given colour for the first time, such as brand new lime green doors and door frames. There are also three new printed elements.

How big is 40502 The Brick Moulding Machine?

40502 The Brick Moulding Machine is 19cm tall, 15cm deep and 29cm wide, so you’re going to need a surprisingly hefty shelf space to pop it on display.

How much does 40502 The Brick Moulding Machine cost?