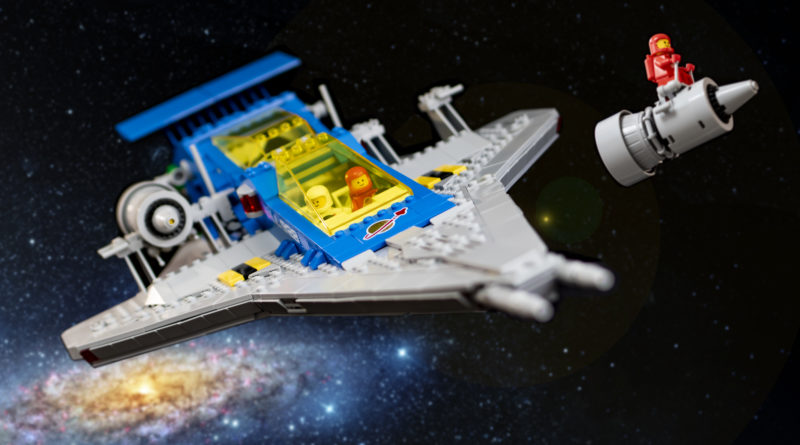 LEGO ICONS 10497 Galaxy Explorer tackles a true classic for the 90th anniversary – but can it successfully push our nostalgia buttons while simultaneously delivering something fresh and new?

If there’s one word that’s synonymous with old-school LEGO, it’s spaceship (spaceship, SPACESHIP!). Sure, classic LEGO includes much-loved themes like Castle (which is getting its own 90th anniversary update in 10305 Lion Knights’ Castle) and Pirates, but none quite captured the imagination of children in the late ’70s or early ’80s in the same way as LEGO Space.

From the utterly adorable and perpetually happy spacemen minifigures to the now-iconic colour scheme and shaping of the spaceships themselves, the LEGO Space theme gave us a chance to live out our intergalactic fantasies, and build the extraterrestrial spacecraft of our dreams. Fast forward four decades, and to celebrate the LEGO Group’s 90th anniversary, the original and iconic 497 Galaxy Explorer has been updated and upscaled, embracing and adopting a wealth of modern parts and techniques in the process.

However, we live in an age where reboots and remakes across all platforms come thick and fast – the consequence of which is that they’re often hit and miss. At this point, we’re all used to seeing our beloved childhood memories tarnished by cynical cash-ins, missed opportunities and modern takes on classics failing to do justice to their revered source material.

So, will 10497 Galaxy Explorer be able to craft a model that’s more than just an exercise in nostalgia, and deliver a set that’s not only worthy of standing next to its iconic predecessor, but will also be considered a classic in years to come?

There’s no getting away from the fact that 10497 Galaxy Explorer is a set designed to press a lot of nostalgia buttons among fans of a certain age. The box art mimics the classic packaging of a bygone era – one look instantly takes you back more than four decades.

A brief history of the original Galaxy Explorer and the Classic Space theme greets you in the first pages of the manual, as well as a short introduction from Design Master Michael Psiaki. (Interestingly, Michael has been working on an updated Galaxy Explorer since way back in 2013 – almost a full decade ago.)

However, 10497 Galaxy Explorer is much more than just a pleasant trip down memory lane. It remains true to the original source material, while at the same time offering up a modern, engrossing, ingenious and highly entertaining experience, with the mix of old vs. new running through as a constant theme. Everything has been so well thought out and considered, and the level of respect for the original 497 Galaxy Explorer can be felt throughout the entire set.

There are no stickers in 10497 Galaxy Explorer, just like fans in 1979 would have experienced; the colour scheme uses colours only available back in ‘79 (the only exception being the more modern version of grey); the minifigures are near-identical replicas (albeit with stronger helmets to stop any cracks appearing); and even the set number, 10497, is a nod to the original’s product number.

While honouring 497 Galaxy Explorer in all those departments, however, there’s one major area where the new version departs from its predecessor: its size. The new model is one and a half times bigger than the original, using modern parts to recreate older pieces on a larger scale. That allows the new model to pack in retractable landing gear and an airlock door – neither of which were features of the 1979 version.

Both of those new additions bring so much more to the overall displayability and playability of the final model in 10497 Galaxy Explorer. The landing gear is a brilliantly simple yet incredibly satisfying mechanism, folding out to allow the pads to sit flat on the ground, before folding back underneath the fuselage.

Also updated is the cockpit area, now with room for four minifigures to sit inside rather than just two. It’s constructed using more modern 1×3 jumper plates, providing seating for each astronaut, along with a classic piece, the 2×2 white ventilator, for detailing. Although it’s a very traditional piece, it was only reintroduced in 2019 – perfect timing to be included in this modern update.

Not only does 10497 Galaxy Explorer serve as an enjoyable build experience, but it also serves as something of a LEGO history lesson, showing us how old parts can be recreated using new techniques.

The brick-built front nose cone, for instance, mimics the original set’s 1×2 modified plate with bar handles, while 497’s printed arrow design is now constructed using a pentagonal tile. Its thrusters, originally built from a single loudspeaker element, are now ingeniously constructed with minifigure buckets, and the sides have been bulked up with a combination of sloped elements to give the model a sleeker, more defined finish.

However, there are still enough new features, techniques and wonderful pockets of ingenuity spread throughout 10497 Galaxy Explorer that it holds up as a very accomplished model in its own right. The way the angled slope of the cockpit hinges into place and later connects to the main framework through hidden Technic pins is very smart. The framework connects to the bodywork through 1×1 round plates with bars, which attach to 1×1 bricks with studs on the side. Two beds for the astronauts feature in this updated design, with 1×2 door panels leaving just enough space for the astronauts to lie down with their air tanks still on – probably a good idea when you’re travelling through intergalactic space.

The airlock door is probably the neatest new design, employing upside-down studs to form the door itself. The whole sub assembly is then ever-so-slightly angled using Technic pins, which create the subtle sloped shape of the airlock bay.

The original model is undoubtedly iconic, but when looking at it with an objective eye it’s fair to say it’s quite basic in its design – especially when it comes to greebling and extra details. True to form, this model rectifies that with tiles, wedge plates and slopes adding details and texture over the fuselage – all of which make the model feel modern, while still maintaining the unmistakable look of the original.

The printed parts, while also new designs, faithfully capture the feel and aesthetics of 1970s’ sci-fi with various dials, buttons, control panels and a whole host of other important ‘spacey’-looking things. There’s even a really cool Easter egg thrown in, as one of the control panels features a design reminiscent of the video game ‘Asteroids’ – an arcade classic also released in 1979. Another neat reference is found on the printed 1×6 brick that features the designation ‘LL928’. The original model had the same designation, just on a much smaller (1×3) brick.

Of course, no reimagining of a LEGO Classic Space icon could be complete without the ubiquitous space buggy. It’s a fun little design, and the way it rolls down the rear ramp is just so satisfying.

The four main engines are by far the most modern design feature of the whole model, and are really enjoyable to construct. The parts usage is excellent too, with the large barrels resembling a real-life engine perfectly. The two side engines can also be detached and used as mini sky hoppers for the astronauts to ride around on. The engines are a great finish to the experience and cap off the set’s mission to bring the original model’s features up to date with more complex techniques and modern parts.

Four minifigures are included, two white and two red astronauts, which are almost identical to the original four that were released with 497. There’s not much to be said about LEGO spacemen – they are such a recognisable and iconic mainstay of LEGO that every fan will either have multiple in their collection, or at least know exactly what they look like.

The classic smiling face, the space logo and the air packs are so distinctive, and when placed around the model instantly add a level of charm that modern minifigures perhaps wouldn’t have managed. The LEGO Group could have diversified with different colours of astronauts, but that would also have diverged from the original set, so it’s obvious why this selection was included – and their colours do contrast nicely with the blue, grey and trans-yellow of the ship.

When the first pictures emerged of 10497 Galaxy Explorer, there was one very obvious thing missing: the original set’s large cratered baseplate. While it would have been incredible to get a brick-built recreation, the cost needed for the extra parts would have forced this model into the top end of the price range.

As it is, the price point feels perfect for this set. It’s a comprehensive and enjoyable build, a brilliantly-designed final model and a set that contains a decent piece count. More than that though, the cost of the set makes it far more accessible, allowing older fans to enjoy the nostalgia trip and younger fans to enter the world of Classic Space for the first time. That doesn’t even take into account that the model can be made into another two unique spaceship builds (instructions to be made available through LEGO.com soon).

The LEGO Group could have been very cynical when it came to the cost of this set, and knowing the popularity of the original 497 Galaxy Explorer, fans would have flocked to purchase it no matter the price. In keeping 10497 Galaxy Explorer down to just £89.99 / $99.99 / €99.99, the LEGO Group has done justice not only to the model itself, but our wallets, too.

It’s not always easy revisiting a classic, and the original 497 Galaxy Explorer is not just any classic – it’s one of the LEGO Group’s most iconic and beloved sets of all time. With all that in mind, it’s truly wonderful to see just how much care and attention has gone into the design and the overall experience of 10497 Galaxy Explorer as a whole.

The 90th anniversary set not only feels at home within the modern LEGO portfolio, but should get the seal of approval from those fans old enough to remember (and build) the original model. For those not old enough to appreciate all the nostalgic touches spread throughout, there’s still enough on offer that 10497 makes for a decent purchase.

It really is an update that’s been handled with love and affection, and its charm oozes out from every brick. It’s a brilliant set to look at, and thanks to its modern play features, it’s also great fun to play with – bringing back all those warm and fuzzy memories of swooshing around LEGO spaceships back in the day. It’s a practically perfect set, and – alongside 10305 Lion Knights’ Castle – makes for a great way to kick off the 90th anniversary celebrations.

How long does it take to build LEGO ICONS 10497 Galaxy Explorer?

Nine bags contain all the pieces needed to construct 10497 Galaxy Explorer. It will take roughly two hours to finish, depending on how quickly you build.

How many pieces are in LEGO ICONS 10497 Galaxy Explorer?

10497 Galaxy Explorer is one and a half times bigger than the original, measuring 52.5cm long and 32cm wide.

How much does LEGO ICONS 10497 Galaxy Explorer cost?