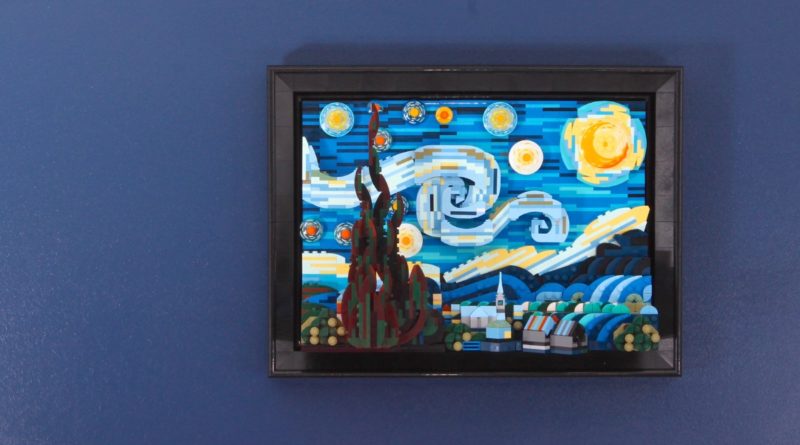 The LEGO Group paints a very different picture of what LEGO Art can look like in 21333 The Starry Night, a three-dimensional representation of Vincent van Gogh’s renowned artwork.

This isn’t actually a LEGO Art set, of course, but it’s as close as you’ll find beyond the scope of that mosaic-first theme (which itself is experimenting with a new canvas type in 31206 The Rolling Stones). Based on a LEGO Ideas submission by Truman Cheng, 21333 The Starry Night recreates Dutch Post-Impressionist painter van Gogh’s magnum opus, which now sits in the Museum of Modern Art in New York.

It does so without the tried-and-tested two-dimensional application of tiles and/or plates, as per the vast majority of LEGO Art sets to date, and builds on Truman’s original concept with the addition of a frame, so that – if you so desire – you can also recreate a slice of MoMA in your own home by popping it on your wall.

But for that to be something you’ll genuinely want to do, 21333 The Starry Night first has to deliver a build that’s not only capable of translating van Gogh’s brush strokes into bricks, but also realises the proportions, colours and shapes of its source material in a way that makes this model instantly recognisable as that particular painting, while also bringing it to life with a three-dimensional build that leaps off the canvas.

It’s a tall order, no doubt – but the LEGO Ideas team at least had a very solid starting point in Truman’s fantastic concept. Let’s see how well it’s survived the transition to a stable, entertaining LEGO set…

If you’ve ever had the privilege of stepping foot in New York City’s Museum of Modern Art, you – like us – probably made a beeline for Vincent van Gogh’s The Starry Night, which has been a permanent installation at the institution since 1941. The oil-on-canvas painting is among the most iconic works of art in the western world, and depicts the view from van Gogh’s room at Saint-Rémy-de-Provence, an asylum in the south of France.

The artist had admitted himself to the asylum following his December 1888 breakdown, in which he famously removed his own left ear. He occupied not only a second-storey bedroom, but also had access to a ground-floor space that he used as an artist’s studio, and in which he created some of his best-known art – including The Starry Night.

During his time at Saint-Rémy-de-Provence, van Gogh painted as many as 21 different versions of the east-facing view from his bedroom, creating sketches with ink and charcoal upstairs before moving downstairs to apply oil to canvas. He painted the landscape at different times of day, with different artistic embellishments across each one, but The Starry Night – his most iconic interpretation of the wheat field and its rolling hills beyond, which also includes an imagined village – is the only nocturnal version in the series.

It’s also perhaps the one that features the boldest use of colour, mixing ultramarine and cobalt blue with zinc yellow and the rare Indian yellow, among other shades. That was surely the first challenge for Truman Cheng, and the LEGO designers responsible for transforming his concept into a finished model: how to best recreate van Gogh’s mastery over colours within the confines of the LEGO palette?

The answer was apparently to just bundle in pretty much every shade of blue and yellow currently available, and from the off it’s easy to see how that might make for one of the most challenging builds in recent memory. In fact, it’s not the yellows that will cause much difficulty, but the shades of sand green and light blue, or dark blue and dark green, all used within close proximity and all tricky to tell apart – at least in the instructions – in all but the brightest light.

Supreme care and concentration is required in putting together the first few bags in 21333 The Starry Night, or else you’ll quickly find yourself unbuilding and rebuilding when a particular step calls for a sand green round 2×2 plate – and you’ve somehow only got a medium azure piece left. Those kinds of errors could be especially common while putting together the enormous sub-assembly that comprises the low hills of the Alpilles mountains, where shades of bricks intricately blend together to replicate van Gogh’s brush strokes.

The net result, however, is that 21333 The Starry Night never fails to be an engaging and challenging build: not only in its use of colour, but also in how its elements come together. It’s completely unique, in a way you’d expect for what’s such a unique entry in the wider LEGO portfolio – let alone Ideas. 10302 Optimus Prime is new, but it’s also just another massive mech; 21325 Medieval Blacksmith was a hit with Castle fans, but we’ve seen buildings before. 21333 The Starry Night is a completely new expression, and it feels it throughout the entire build – even with one eye on the wider Art theme.

That’s because the build is also inherently varied, so unlike traditional Art sets, you never really fall into the same cycle more than once: for better and worse.

Remember chapter nine in George Orwell’s 1984, which details an extended excerpt from The Theory and Practice of Oligarchical Collectivism, and in doing so interrupts the pacing of the entire novel? That’s how it feels reaching the backboard of 21333 The Starry Night. Roughly midway through the build, you’ll come to a set of bags filled with hundreds of 1×4 plates in various hues of blue, ready to be stacked precisely and methodically for the backdrop of van Gogh’s painting.

You’ll need to pay particularly close attention here to identify each of those shades, especially as their respective colours in the manual don’t necessarily match the actual bricks – locking on to one identifiable blue (the darker the better) is pretty much the way to go, then discerning the rest of them from that base. After that, it’s simply a case of laboriously and painstakingly layering those plates in a huge, vertical expanse that – in isolation – appears muddled and messy.

But then you’ll fasten it in place, and suddenly it all starts to make sense. The frame comes next, and unlike the standard LEGO Art borders, it’s a frame with the necessary depth to illustrate the three-dimensional nature of 21333 The Starry Night. Then it’s back to adding embellishments across the image, from the (happily printed) stars that give it its name to the dominating cypress tree, which sits furthest from the canvas and is also a fascinating and finely-tuned build in its own right.

Given this is a three-dimensional model that emerges from a traditional, two-dimensional frame, you might be wondering how it deals with our old friend gravity. The answer lies in the bottom-right corner of the scene, where a single Technic pin and axle assembly puts in all the leg work of keeping the entire thing upright – when it’s free-standing, anyway. It’s an effective but slightly clumsy solution that prioritises practicality over aesthetics, in contrast to much of the rest of the set.

You won’t need it if you’re hanging it on the wall, of course – and that’s absolutely feasible, because the rear of the frame (which doesn’t entirely envelop the LEGO painting, as it doesn’t need to) incorporates the same hanging element introduced for the LEGO Art theme. If you needed more proof that this is essentially another extension of that line-up…

That’s not to take anything away from 21333 The Starry Night, of course, and it further diverges from the standard LEGO Art approach by including a minifigure of its artist, Vincent van Gogh. He’s brilliantly-realised, with detailed arm and leg printing – rightly so, given this is probably the only minifigure of the Dutch painter we’ll likely ever receive.

He won’t sell the set on his own, but it’s the perfect finishing touch often absent from other adult-focused products. There’s even a platform on which to stand him, if you so choose, painting his own miniature version of The Starry Night – a wonderfully-printed piece that catches the light in such a way that it genuinely feels painted on to the element.

What might once have been a fairly expensive price tag for a LEGO Ideas set has now essentially been normalised, as 21333 The Starry Night comes in at triple figures – just like 21332 The Globe, 21330 Home Alone, 21327 Typewriter and so many more before it. Stacked up against those sets, van Gogh’s masterpiece feels about right; and next to any LEGO Art mosaic, it feels even better value, simply for the involved build experience and the sheer heft of the final build.

£149.99 / $169.99 / €169.99 is no small ask for any LEGO set, even while others balloon to two or three times that cost, but if you’re looking for a genuine display piece in every sense – and one that’s more entertaining than laying down basic tiles and plates – it’s absolutely one worth saving up for.

21333 The Starry Night is LEGO Ideas at its best: taking an inspired and original fan concept and embellishing it for the final product. Here, that’s through both the use of a frame, which does a whole lot to sell this as a genuine work of art, and the exclusive printed pieces used to portray its stars. Truman Cheng’s brick-built solution for those was fine enough, but this takes things just that one step further, without losing the charming LEGO DNA that imbues every plastic brush stroke.

As a concept it’s completely unique, taking advantage of its medium to extend another branch on what’s becoming an increasingly sprawling tree of artistic possibility. That MoMA branding on the box already has us hopeful for what might follow 21333 The Starry Night, allowing us to create a personal slice of New York’s foremost gallery right here at Brick Fanatics HQ.

How long does it take to build LEGO Ideas 21333 The Starry Night?

You’ll spend roughly three hours putting together LEGO Ideas 21333 The Starry Night, but that all depends on how much attention you’re paying the first time round – there could be some hasty rebuilding required if you mix up the colours…

How many pieces are in LEGO Ideas 21333 The Starry Night?

LEGO Ideas 21333 The Starry Night measures a hefty 38cm tall, 21cm wide and 28cm deep. It’s also pretty heavy, so make sure you’ve got a strong hook if you’re planning to pop it on the wall.

How much does LEGO Ideas 21333 The Starry Night cost?