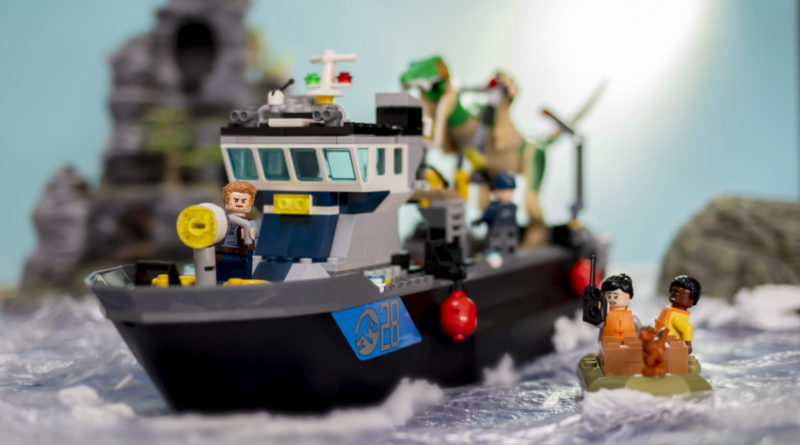 76942 Baryonyx Dinosaur Boat Escape is a prehistoric boat chase that will leave everyone but the most die-hard LEGO Jurassic World fans with a massive sinking feeling.

There are certain LEGO sets that feel like incredible value for money, offering not only a brilliant building experience but also an abundance of content in the box. Then there are those sets that feel like a massive let-down once you’ve parted with your hard-earned cash, ripped open the box (or carefully prised open the seal, depending on what type of collector you are) and poured the contents on to the table.

It’s a horribly disappointing feeling that no toy should ever bring to a consumer, but 76942 Baryonyx Dinosaur Boat Escape unfortunately falls very much into that category. It’s honestly so devoid of stuff that it makes reviewing the set in anything but a negative light incredibly difficult.

Upon opening the box you might find yourself doing a double take at the utter lack of things actually inside. There are three small numbered bags – of which the first is so devoid of pieces that in any other set it would probably have been placed inside a much larger bag – a medium-sized Baryonyx, a moulded dinghy, a large moulded hull (at least it actually floats) and four minifigures, with only one being exclusive.

It’s a really, really bad start to a set. The only thing that can save this is the quality of the build – but with such a small number of pieces in the mix, it’s probably not worth holding your breath for that to be its saviour.

Bag one feels like it’s there to make the set feel bulkier than it actually is. Connecting the seven pieces to the moulded dinghy and attaching the six separate pieces that make up the Baryonyx will take even the most inexperienced of builders less than five unsatisfactory minutes.

The dinosaurs that are included in the Jurassic World theme are always the stars of the show: the Carnotaurus in the recent 76941 Carnotaurus Dinosaur Chase is imposing, terrifying and great fun to play with, while the Triceratops from 75937 Triceratops Rampage is another example of a fantastic looking dinosaur that really elevates its set.

Here, the Baryonyx looks as if it hasn’t been fed for almost as many years as it’s been extinct (for Dino geeks that would be around 125 million years ago). From the side it looks great, making it no surprise that all of the official photographs have been shot with the dinosaur in profile. However, front-on or from the back it feels way too skinny, and is less scary and more comedic. To make matters worse, this isn’t even a new dinosaur as it’s already appeared in the theme – it’s just recoloured.

So far, so bad – but surely the large ocean-going vessel can offer up enough value to stop this set sinking without a trace? The short answer is no, unless placing a small amount of standard bricks on to a massive piece of plastic floats your boat.

In fairness, the small details that are added to the hull – the fire extinguishers, floats, life jackets and various lights – do look good and help to create quite an authentic boat, even if the actual techniques and skill needed to build these are incredibly basic. The front searchlight incorporates good parts usage and the fish feeding stick and walkway are a fun addition, but in reality both these elements wouldn’t have even got a mention if there was more on offer.

Moving on to the second half of the build, and it’s definitely an improvement. The bridge and cabin area is simple yet nicely done and enjoyable to put together. The top and middle sections are both removable, allowing for more storage space on board, although there isn’t enough space for the dinghy underneath the bridge – and with so much space on the deck, this could easily have been included.

The best features are the various trans-coloured pieces representing the numerous lights on board, which add great detail as well as giving the model splashes of vibrancy across the dark blue hull. With the exception of the boat being able to float, the only other significant play feature is the bars that contain the Baryonyx once it’s been captured.

Admittedly, with everything built – which will not take long at all – it does look quite impressive, and it’s at least on a fairly large scale. But the ends don’t always justify the means, and this set proves that point. It’s a decent-looking model that will no doubt entertain younger fans (who are, after all, this set’s primary audience), but with a build that leaves a lot to be desired and a price tag that feels hugely inflated.

One exclusive minifigure in a set that costs £75 (or $79.99 / €79.99) is incredibly poor form. The minifigure on offer is in no way desirable either, making the deal even worse. Owen Grady is of course present, unsurprisingly in the same outfit he comes with in pretty much every single 2021 Jurassic World set.

The same Darius minifigure that comes with 76940 T. rex Dinosaur Fossil Exhibition is also included, alongside an ACU trooper and Yaz, the exclusive minifigure who at least has dual-moulded legs. Oh, and there’s a baby raptor too, so… yay?

If you haven’t guessed yet from the scathing review you’ve just read, 76942 Baryonyx Dinosaur Boat Escape is hugely overpriced. LEGO is as much about the build as it is about the final model, and to call this build lacking would be a criminal understatement. Yes, the finished product does look impressive and makes for a very appealing playset, but you’d have to be a Jurassic World superfan to be willing to part with this much cash for what you get.

If you’re into spending lots of money on huge single pieces of plastic then this is the set for you. For everyone else, don’t waste your money – unless you find it massively discounted.

As a playset, there is enough within 76942 Baryonyx Dinosaur Boat Escape to offer some enjoyment to younger fans. The boat is large, sturdy and the fact it floats makes it great fun to play with in or out of water (obviously with the correct adult supervision), and the Baryonyx is a large enough dinosaur to have an element of menace to it. The boat does feel authentic, even though it’s mainly one massive piece of plastic, and the small amount of details added look good.

However, the price is just way off what feels reasonable and justifiable. The build is severely lacking and feels more like an advanced 4+ set rather than the 8+ age mark the set commands. The Baryonyx, as large as it is in height, looks so scrawny it’s almost comedic; none of the minifigures feel desirable in any way; and the giant pre-moulded hull piece feels like a throwback to the LEGO Group’s dark period of the late-1990s/early-2000s.

The Jurassic World franchise famously brings prehistoric creatures back to life, but this is one set that’s better off going extinct as fast as possible.

Boy oh boy, don’t expect this set to take long at all. As an experiment we timed how long bag one took to put together, and it came in at two minutes and 21 seconds – and that includes the time it took to write down our thoughts. You’re probably talking 45 minutes tops altogether.

How many pieces are in LEGO Jurassic World 76942 Baryonyx Dinosaur Boat Escape?

Despite the over-inflated price tag, 76942 Baryonyx Dinosaur Boat Escape contains just 308 pieces, and that includes the parts that make up the Baryonyx and one massive hull piece.

The scale of 76942 Baryonyx Dinosaur Boat Escape is a rare positive of the set as it does feel impressively large, measuring 40cm long and 13cm wide.

76942 Baryonyx Dinosaur Boat Escape is out now, and costs a staggering £74.99 in the UK, $79.99 in the US and €79.99 in Europe. If you’re still interested in what it has to offer after reading this review, we highly recommend waiting for this to go on a massive discount. 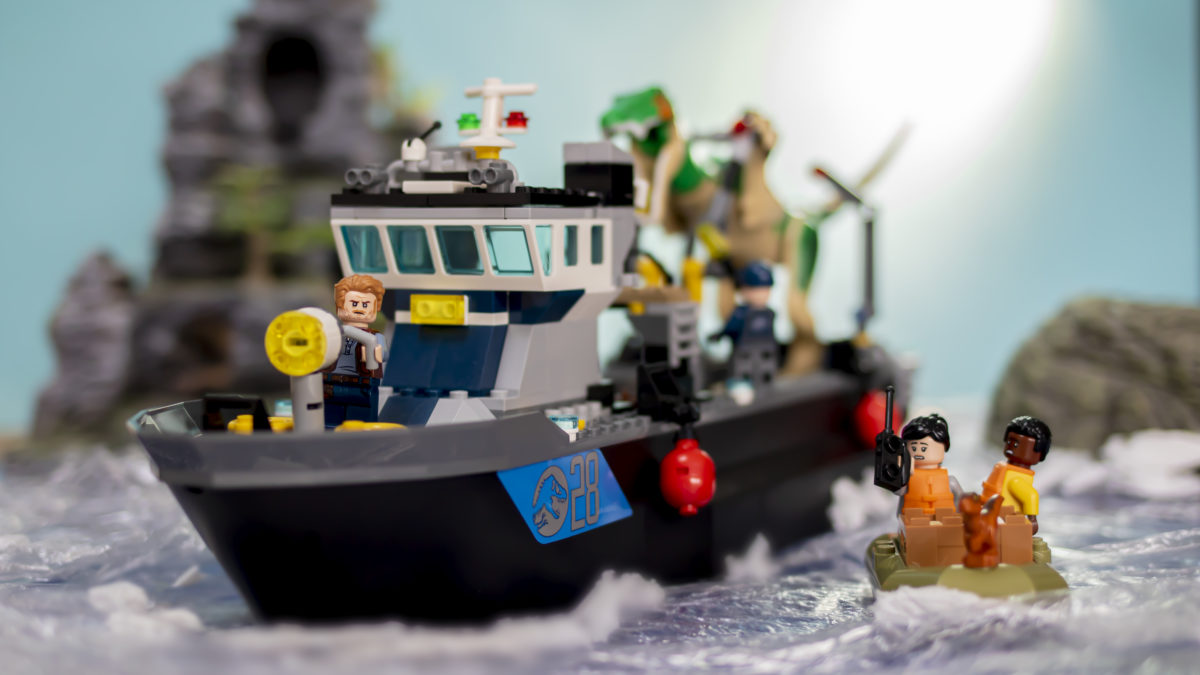