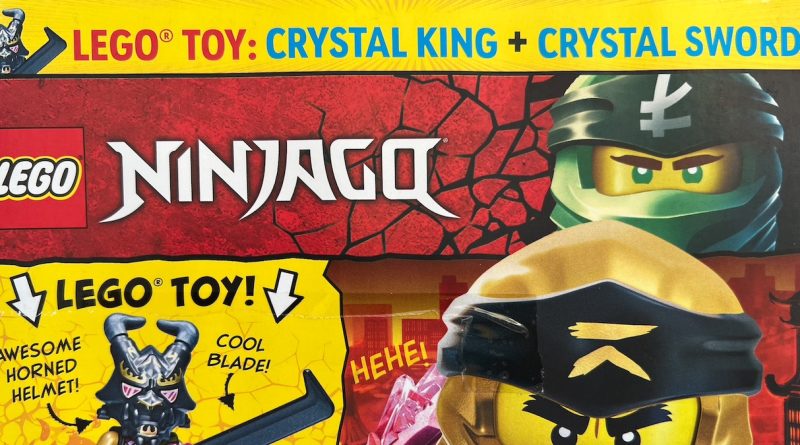 The latest issue of LEGO NINJAGO magazine is the first official UK title to switch from foil packs to paper bags for free gifts.

Following the appearance of a Thanos minifigure in a paper bag on European copies of LEGO Marvel Superhero Legends, the first official UK magazine to replace foil packs is now on sale. LEGO NINJAGO magazine issue 94 is currently available from all good newsstands, complete with a free cover-mounted Crystal King/Overlord minifigure and crystal sword accessory.

This issue is significant as it marks UK publisher Immediate Media beginning to phase out its standard foil and plastic packaging for gift items, replacing them with more environmentally-friendly paper bags. It also follows in the footsteps of the LEGO Group confirming it had recently completed a ‘successful trial’ of its new replacement paper bags and would begin introducing them into all sets from 2022.

With official magazines starting to shift to sustainable paper bag packaging, it’s likely we’ll begin to see more LEGO sets following suit, although only a handful of the proposed paper bags have briefly popped up on eBay so far.

LEGO NINJAGO magazine issue 94 is on sale now and priced at £4.99. Next month’s free gift in a paper bag is scheduled to be a Golden Cole minifigure, which is also currently available in both 71769 Cole’s Dragon Cruiser and 71774 Lloyd’s Golden Ultra Dragon. Picking up the magazine will therefore be a much cheaper way of fans obtaining the Crystalized version of the ninja for their collections.