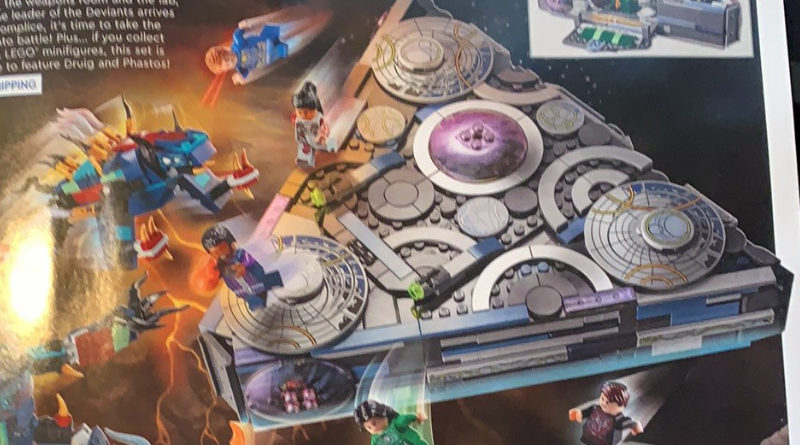 The new LEGO Marvel Eternals sets have been revealed in pictures found in a Canadian LEGO catalogue, including an all-new cast of super-powered Marvel characters.

The new range of LEGO Marvel Eternals sets has been revealed on the Brickset members Facebook group, with the film currently scheduled for a late 2021 release. It appears the LEGO sets will be releasing sooner though, with the four new sets revealed.

Four new models make up the LEGO Marvel Eternals sets with 76145 Eternals’ Aerial Assault, 76154 Deviant Ambush, 76155 In Arishem’s Shadow and 76156 Rise of the Domo, all including new characters and minifigures.

The smallest of the range is 76145 Eternals’ Aerial Assault, with two minifigures and 133 pieces. The build includes an airborne Deviant creature for Ikaris and Sprite to do battle with for $13.99 CAD The largest set is 76156 Rise of the Domo with a triangular ship featuring a full interior for $119.99 CAD

The other two sets include 76154 Deviant Ambush, with three minifigures and a larger Deviant creature as well as new fist and hair pieces for $29.99 CAD. 76155 In Arishem’s Shadow finishes the range with another flying Deviant and the first buildable figure based on one of Marvel’s Celestials – cosmic beings that shape the universe. 76155 will cost $79.99 CAD.