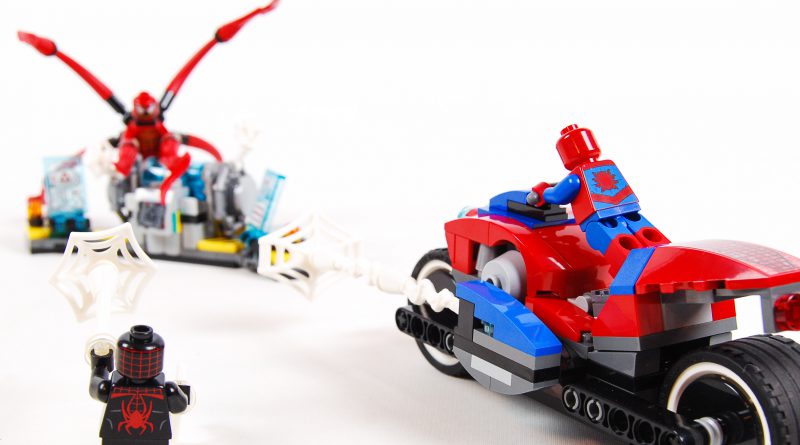 Carnage has long been one of Spider-Man’s most lethal villains. Does 76113 Spider-Man Bike Rescue have more to offer than adding him to your minifigure collection?

In 76113 Spider-Man Bike Rescue, Spidey is travelling across New York to stop Carnage – not by swinging between buildings, but on a motorbike. The set also includes a power generator to build, the more importantly two minifigures – Miles Morale and Carnage. 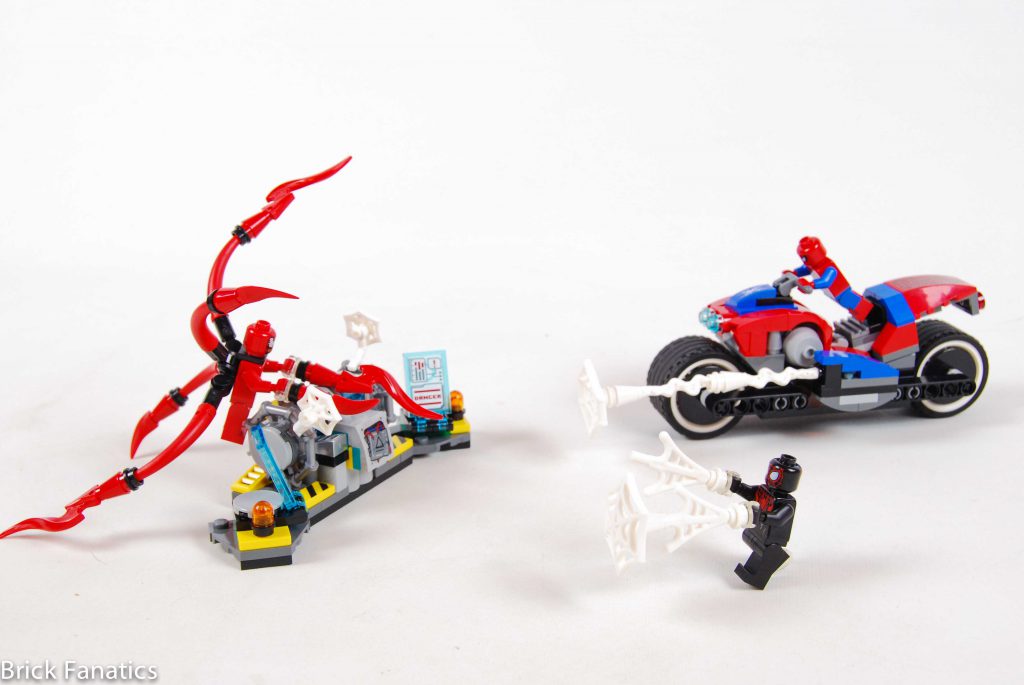 Spider-Man sports what is essentially a re-coloured NINJAGO motorcycle accented with a couple of stickers to really drive home the spider branding. In sets of this size, such motorcycles are commonplace. There is nothing notable about this one as it follows the standard formula of a bulky bike with seat arrangement that fits a minifigure – somewhat awkwardly – with a proprietary weapon, in this case a web, that is a dead ringer for the specific character. This is perfect for a child’s first super hero set, but will be of little interest to adults who have any experience with collecting in this genre.

By far the weakest part of 76113 Spider-Man Bike Rescue is the power generator, although it is not entirely clear that is what it is. It seems to simply be a generic “sciency” looking prop to give Spidey and Carnage something to fight over. It sports the LEGO Group’s favourite play feature that is not called a stud shooter – a catapult.

Like in many other Marvel Super Heroes sets (most recetly 76099 Rhino Face-Off by the Mine), a small lever can be pushed to pop something, in this case the trans blue canisters, out and onto the floor. I have never understood the appeal, but considering the LEGO Group’s extensive play testing, the continued inclusion of this catapult feature means that children must love them. The highlight of this section are a few small web components which are still fairly new elements.

The appeal to most fans are the minifigures. Three highly detailed stars of the Spiderverse are included. The titular Carnage is the highlight, through the chance to get him along with both Peter and Miles is fantastic. Carnage looks truly evil and menacing, and his numerous arms are great for both display and play. All three figures sport back printing as well as leg printing with the exception of Miles. Three highly desirable minifigures brings great value to 76113 Spider-Man Bike Rescue.

This set holds a fair amount of appeal, despite the models included being either by the numbers or weak. The set is perfectly sized and priced to be a great birthday gift or pocket money purchase for children looking to start, or beef up, their super hero collection. Conversely, adult collectors should jump on the chance to get these three figures at such a low price point.

76113 Spider-Man Bike Rescue is available now at shop.lego.com. You can help support Brick Fanatics’ work by using our affiliate links.