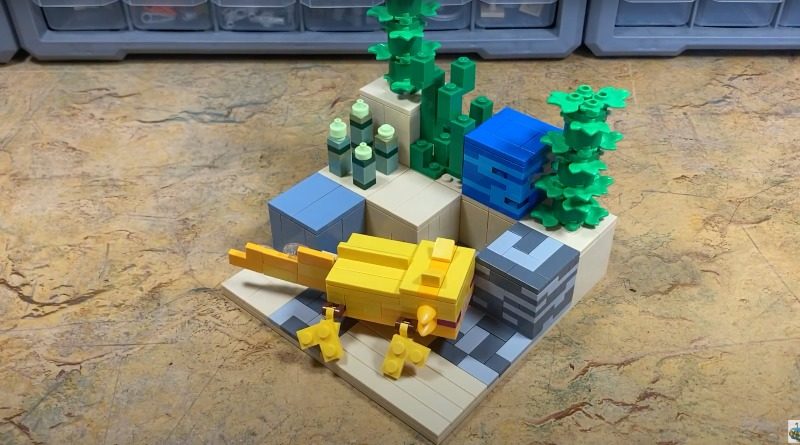 Although the Minecraft Caves and Cliffs update didn’t bring all the upcoming additions with it, as the second half of the update has been delayed to the end of the year, one new face that players can now meet is the amphibious axolotl. Coming in a range of colours and able to be tamed by picking to up in a bucket, it’s quickly becoming a fan favourite among Minecraft users.

Now, LEGO YouTuber RJMBricks has recreated the little creature out of LEGO elements, along with a few of its favourite things from its marine habitat. Sand, seaweed, and coral surround the yellow axolotl in his build, although you could switch up your colours and bricks for a bit of variety in your own build if you wanted.

Axolotls can live both on land and in the water in the game. The golden colour you see in the YouTuber’s build is the rarest you’ll find in the game. The LEGO fan also made an even tinier version of the entire diorama, for those who want a mini LEGO axolotl but don’t have space for a full build.

For more LEGO Minecraft inspiration, check out this brick-built anvil or the LEGO chest to house all your space elements and Minecraft memorabilia.