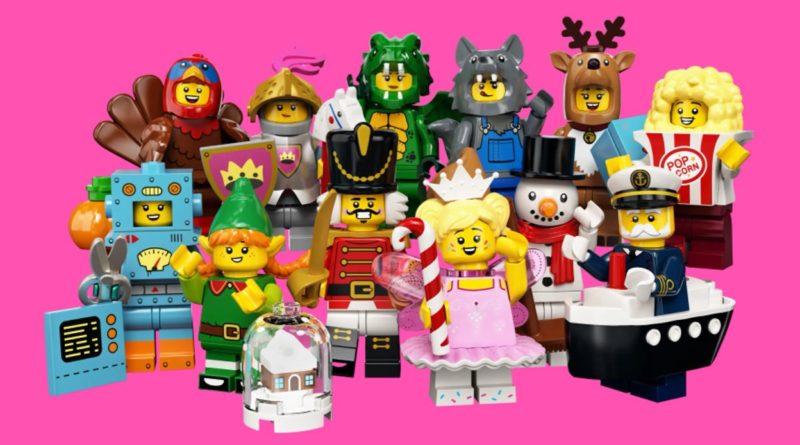 With fewer figures in recent series, some uninspiring models and some bizarre design decisions, LEGO Collectible Minifigures seem to be having a wobble.

LEGO Collectible Minifigures, perennial favourite and ideal impulse purchase, have been around for more than a decade now. In that time we’ve seen 22 ‘original’ sets – with a 23rd on its way in September – alongside 17 sets of licensed minifigures, from Disney to the German National soccer team. For many buyers, the Pokemon vibe of ‘Gotta catch ’em all’ is enough to keep them hunting down complete sets each time, but if you’re not compelled by the completists itch, then are they still the essential purchase they once were?

Whereas licensed sets contained anything from nine to 22 minifigures, non-licensed sets, up until Series 20, contained 16 minifigures. At that point it went down to 12, possibly trying to counter the inevitable price rises, so that a set did not become prohibitively expensive. Less product for the same (or thereabouts) price was the perfect example of ‘shrinkflation’.

But alongside the reduction in numbers, have the LEGO Group reduced the inventiveness of the designs?  Some minifigures are crying out for a ‘buddy’. In Series one we had the blue Cheerleader. Most sports that require a cheerleader involve two teams, so in Series eight we had a Red Cheerleader. The Spooky Girl in Series 12 didn’t have to wait too long for Spooky Boy to come along. But pity the poor Hockey player in Series 4, who’s still waiting for an opponent, 11 years later.

Coming up to date, a lot of people looked at the images for the upcoming Series 23 and scratched their heads. Half of the set had a clear seasonal theme, with a snowman, the Nutcracker, a Turkey guy and a Reindeer girl. Meanwhile, the other other half of the set just seemed to consist of a random selection of ideas. We’re struggling to see a connection between Wolf guy, a Ship’s Captain and a walking box of popcorn. Maybe there’s a deeper meaning that we’re just missing.

Then add to this the strong possibility that Series 24 will come in boxes rather than bags, which (unless someone discovers a hidden code on the box) will make it all but impossible to determine the contents. Many people are prepared to buy blind when they have a fighting chance of working out the contents, meaning that you can usually complete a set with few or no duplicates.

But combine completely random selections with arguably declining standards in minifigure design – just our $0.02, you may feel differently – then Collectible minifigures could be going from a must have to a ‘Hmmm. Don’t think I’ll bother.’ in the future. We’ll have to wait until Series 24 is officially revealed to see whether the ‘desire to acquire’ is still strong.

Purchasing your LEGO via our affiliate links helps support Brick Fanatics. Thank you.

6 thoughts on “LEGO Collectible Minifigures could be losing their way”