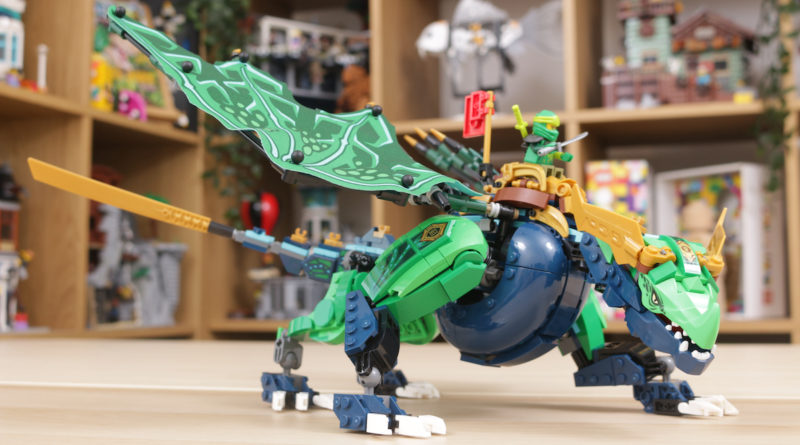 71766 Lloyd’s Legendary Dragon is a wonderful example of the best kind of dragon LEGO NINJAGO can build, but is it too clever for its own good?

Coming in at the higher end of the January 2022 wave of LEGO NINJAGO sets, 71766 Lloyd’s Legendary Dragon offers an intriguing and masterful large-scale build of a green and dark blue dragon. From its striking colour scheme to all number of organic details across a solid, sturdy model, 71766 Lloyd’s Legendary Dragon is fantastic in almost every way, bar – arguably – the very clever play mechanism built into its very core.

It’s not often that we are tempted to take out the camera equipment and set it all up midway through building a (relatively) smaller LEGO set here at Brick Fanatics. We do so for the large, fascinating sets that the LEGO Group brings out, where such size and unlimited budget opens up new ideas and ways to use the LEGO brick that we just have to show you. Yet for smaller sets, where budget is a consideration and ‘compromise’ is often part of the design process, it’s a whole lot rarer, and it hopefully goes a long way to explain how impressive and fun 71766 Lloyd’s Legendary Dragon really is.

Such are some of the opening steps of constructing this £54.99 / $69.99 / €59.99 set, we just had to snap a few shots. It’s not the most intricate or hardest selection of techniques you’ll find in a LEGO set in 2022, but for how it demonstrates such a fine understanding of both the compatibility of LEGO parts and their combined mechanics, 71766 Lloyd’s Legendary Dragon is quite fascinating to put together.

It’s all for a play mechanic we will come back to, before a coat of organic details covers it up and the dragon before you takes real shape – and size. Mixing dark blue and two shades of green, 71766 Lloyd’s Legendary Dragon really leans into the comic book aesthetic this January 2022 wave of NINJAGO sets is giving off, and is all the more appealing a LEGO set as a result.

The head may be a moulded, printed piece – reflective of the past year’s return to something the theme had otherwise looked to move away from – but it is complemented by any number of smart and interesting uses of LEGO parts across the entire body of the beast. Immediate details such as the claws, saddle and tail catch the eye, but the subtle uses of sloped parts across the legs and the smart way particular colours have been used around the body add the real undercurrent of quality to the model.

Everything about putting together 71766 Lloyd’s Legendary Dragon excites, also partly for how big the final thing comes in at. That is, until the Technic wings are put together, the cloth decoration is stretched across them and they are attached to the dragon. Your first inclination is to fold the wings – that’s not possible. You may then look to twist the angle that they sit at – also not possible. You could then try moving them up and down at least – and again this isn’t possible.

The wings are locked into an open display position and there’s only one thing you can do from here, and that’s swing them back slightly to another open display position. Other than that, they do not move, because if they did the play feature would likely not be possible.

What was so interesting and exciting in putting together 71766 Lloyd’s Legendary Dragon turns out to be for a play feature that is very smart, nicely built into the model, but also incredibly limiting for wider play and display.

It’s a play feature designed to perhaps mimic the creature moving its wings in mid-flight and it is like few other LEGO NINJAGO sets before it, which is worthy of praise for how innovative it truly is, but it is also a point of contention, for how something otherwise so fun to hold in the hands and set up for any number of poses is actually quite limiting.

The wings aren’t locking into the worst poses, but you don’t get a choice in the matter – and that’s unusual for a LEGO NINJAGO dragon.

Four minifigures are included in 71766 Lloyd’s Legendary Dragon: Lloyd, Nya, Python Dynamite and Viper Flyer. It’s a decent quartet of characters that offers good play potential in combat in and around the large dragon, with the two snake soldiers needing to be a bit creative between the one guy’s flying device and the other one’s small catapult.

The design for each continues the refreshed look of this wave of LEGO NINJAGO, and is evocative of comic book design for how it uses bright and highly contrasting colours.

Coming in at £54.99 / $69.99 / €59.99 for 747 pieces and four minifigures is about fair for 71766 Lloyd’s Legendary Dragon. For how good the model is (bar the immovable wings), it’s an unmissable set for NINJAGO fans, and a great demonstration of how even a decade into this theme’s life, building a dragon is never boring. Just pull your expectations back a little for the wings, or be prepared to spend a little extra on parts to make them poseable again.

71766 Lloyd’s Legendary Dragon is indeed too clever for its own good. It offers a level of technique and fine mastery of LEGO bricks that it has no right to at a price of £54.99 / $69.99 / €59.99. Yet for how that elevates the model in almost every way, it also conversely and unexpectedly hinders it in one key way.

It’s not a huge criticism nor should it deter anyone from picking up what is probably the best set from the LEGO NINJAGO January 2022 wave, but it ensures that what could have been a perfectly-scored, best-ever dragon is instead ‘only’ really good. Really good is still worth it…

Support the work that Brick Fanatics does by purchasing your LEGO NINJAGO dragons through one of our affiliate links.

How long does it take to build LEGO NINJAGO 71766 Lloyd’s Legendary Dragon?

It takes a couple of hours to put together 71766 Lloyd’s Legendary Dragon if you want to race a stopwatch. Otherwise, a bit longer maybe.

How many pieces are in LEGO NINJAGO 71766 Lloyd’s Legendary Dragon?

There are 747 pieces in 71766 Lloyd’s Legendary Dragon and these include four minifigures – Lloyd, Nya, Python Dynamite and Viper Flyer.

71766 Lloyd’s Legendary Dragon measures an impressive 46cm from head to tail, and has a wingspan of 49cm. It also comes in at about 19cm tall, when Lloyd is sat on top.

How much does LEGO NINJAGO 71766 Lloyd’s Legendary Dragon cost?