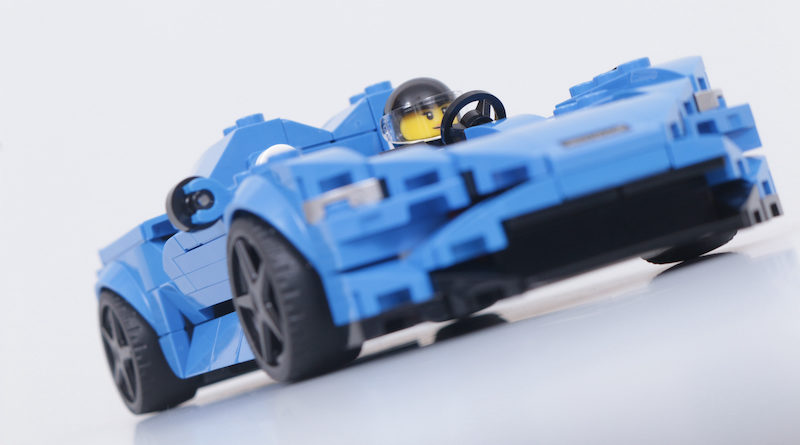 One of the more unusual-looking cars for LEGO Speed Champions to take on, 76902 McLaren Elva embodies all that is great about the theme.

Limited to a production run of 249 (the real thing, not the LEGO set, don’t panic), the McLaren Elva is a mid-engine, roofless sports car, branded as the lightest McLaren produced yet, their first ever open top road-legal vehicle, and the fifth entry in the company’s McLaren Ultimate Series, following the F1, P1, Senna and Speedtail.

Given we’ve already had the P1 and Senna in LEGO Speed Champions form, it’s hardly a surprise to see the Elva transfer over into the brick world too. Importantly, then, with the threat of overfamiliarity of LEGO McLarens in mind, what makes for an unusual entry into modern sports car design likewise makes for an equally eye-catching and rather different LEGO set.

There’s one particular step in building 76902 McLaren Elva that perfectly embodies the spirit of unique creativity that goes into Speed Champions. For each of the rear lights to the Elva, the design team has thought to use a trans-red axe blade and connect it to the vehicle, sideways, via a tap piece.

The rear lights in question are so unusually shaped that nothing in LEGO form should be able to replicate them. Yet combining two regular and fairly common pieces together does exactly that, and it’s a perfect example of a design ethic that is intrinsic to the very best sets that LEGO Speed Champions offers. Build smart, build differently.

This is such an unusual car that few of us will have seen too many images of beforehand and far fewer will ever see in person, and its appearance in LEGO form makes for an interesting and striking brick model that, with so much to take in, leaves very little space for real scrutiny over the authenticity of its design.

That it is coloured in all blue further hides a lot of the changes in shape, angle and direction across the bodywork and, whilst that keeps the car looking as close as possible to any other real car and less like a Star Wars speeder, it also unfortunately camouflages a lot of very smart design work. The Elva is a hard one to take seriously for ‘accuracy’, yet it’s all that and then some. It’s a work of LEGO art in many ways too, just all in blue.

Indeed, such are the undulations in bodywork that have been very accurately captured in LEGO form here, it’s hard not to compare to a couple of the other cars included in the summer wave of 2021 Speed Champions sets and wonder where the same level of almost hyper-design is.

Of course, it won’t be 100% accurate to the real-world car, but it importantly brings an air of assured authenticity for capturing all the right details, from the shaping and dip of the front end of the vehicle, through to the sides of the chassis with the air intakes behind each door and around to the elegantly-sculpted rear end.

Given that the car is roofless, the interior benefits from more attention to detail than many other Speed Champions sets, with the seats perfectly mimicking how they look in the real thing, and the placement of the steering wheel and dashboard a particular detail worth enjoying during the build process.

The minifigure included appears to be non-specific but does come with a dark blue McLaren torso to add to what is a growing collection of unique, set-specific McLaren minifigures.

Whilst the eight-stud-wide LEGO Speed Champions sets advanced design across the board for the theme’s vehicles, they also came with a rise in price. However, for the sets that really capture the essence of the real-world cars they are based on, it’s a price worth considering, and that’s very much the case with 76902 McLaren Elva.

There’s no other car in your LEGO Speed Champions collection that will ever look like this, and that’s pertinent when considering the number of LEGO McLaren vehicles it feels like we have had in years. For everything about it that is unique in appearance, it is equally so in how much fun it is to build. If only the colour scheme was a little racier. McLaren has unveiled a Gulf livery, which the Ford GT Heritage from 76905 Ford GT Heritage Edition and Bronco R comes in, if someone wants to build that…

The McLaren Elva is a fantastic opportunity to have fun with a LEGO build and clearly the Speed Champions team has embraced that when creating 76902 McLaren Elva, looking to capture as many of the twists and turns in bodywork as possible, even if in a rather drab all-blue colour.

A 249-piece-limited real-world car makes for an equally intriguing mass-produced LEGO car, and one not to leave out of the Speed Champions collection.

You can directly support the work that Brick Fanatics does by purchasing your LEGO through one of our affiliate links.

How long does it take to build LEGO Speed Champions 76902 McLaren Elva?

It will take the average LEGO builder around half an hour to put together 76902 McLaren Elva. It’s just one car, but it’s full of little details and very particular build points.

How many pieces are in LEGO Speed Champions 76902 McLaren Elva?

There are 263 pieces in 76902 McLaren Elva, which makes for a slightly higher than expected piece count, given that the vehicle is ever-so-slightly smaller than some of the others in the 2020-21 LEGO Speed Champions range.

76902 McLaren Elva measures 16cm long, 7.5cm wide and 4.5cm tall, making it one of the smaller vehicles from the summer 2021 wave of LEGO Speed Champions sets.

How much does LEGO Speed Champions 76902 McLaren Elva cost?