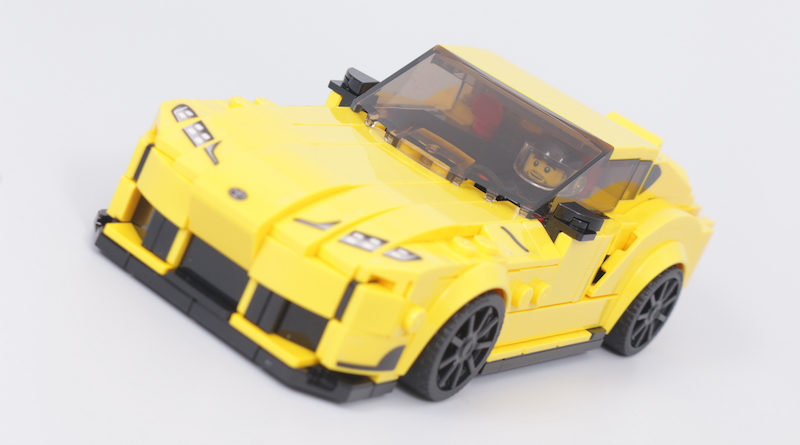 Toyota is the latest car manufacturer to enter the LEGO Speed Champions line with the eye-catching 76901 Toyota GR Supra.

The Toyota Supra has a rich history that dates back to the late 1970s and that initially ran through to 2002, before a fifth generation of the vehicle marked its return to production in 2019. Alongside such a run on the road is one on the racetrack, and more specifically than that, racetracks. Competing in drag racing, touring, rally, GT and Le Mans, the Supra has a unique place in motorsport history.

With an instantly recognisable design based primarily around that long front end and thin lights, how does the Supra convert into LEGO form?

The Toyota Supra is a highly recognisable car, and even with the more particular style points placed in the latest GR model, there are traits to the Supra as identifiable today as they were in various editions of the car going back through the years. It should bring a particular pressure to the design of 76901 Toyota GR Supra but primarily makes things a little bit easier.

Those details make for a profile of vehicle that has a long front end with pronounced headlights, a wide and deep-set windscreen, and a sloped back that curves into a subtle wing, complete with uniquely-shaped rear lights. And that same profile is easily found in 76901 Toyota GR Supra even before studying the particular details that add stated curvature to the bodywork, as per the 2021 model of the car the set is seemingly more specifically based on.

Because of its long production run as a general road vehicle, there is greater familiarity to the Supra than almost all the rest of the cars included in the summer 2021 wave of Speed Champions sets. Not everyone has seen a dragster or a 1968 Chevrolet Corvette in real life, whilst even fewer of us with ever get to see a Koenigsegg Jesko or McLaren Elva, but many more of us will have seen one version or another of the Supra, even if not the racier spec such as the GR.

Combined with coming in an all-yellow design, it does have the effect of presenting 76901 Toyota GR Supra as one of the less appealing Speed Champions sets released this year. For petrolheads and LEGO fans alike, though, there’s plenty to appreciate in the details here to make this a set worth more than a second glance.

Those details are best understood in running a side-by-side comparison between the LEGO model and the real-life version, but suffice to say, where the latest real Supra extends particular lines to the bodywork, tucks in others and introduces a couple of completely new aspects, they are all captured in the LEGO model to one degree or another.

There are certainly limitations to the LEGO building system that are tested and perhaps reached within 76901 Toyota GR Supra, most notably in how the whole model unfortunately suffers with stickered lights when a brick-based solution could have really been special.

Yet, there are areas of LEGO design to be enjoyed and admired throughout, both for those familiar with the Supra (and in particular this 2021 edition) and those who may be coming into this vehicle cold. First impressions aren’t everything, nor are comparisons with the rest of the line-up always most relevant – 76901 Toyota GR Supra may not have the wow factor some are after, but as a slow burner there’s a lot to enjoy here.

76901 Toyota GR Supra comes with one minifigure complete in Toyota Supra GR get-up, ready to race. It’s one of the simpler minifigure designs that LEGO Speed Champions has produced of late, but a nice tie-in to the LEGO set and one that complements it nicely.

76901 Toyota GR Supra follows the same pricing structure as the 2020 single-car, eight-stud-wide sets from LEGO Speed Champions. That means it’s higher than the six-stud-wide cars that had come before, but that increase is reflected by far greater design and authenticity. It’s then really a case as to whether or not the car suits your tastes – the Supra won’t be for everyone, but for those who pick it up, there’s little to regret.

76901 Toyota GR Supra won’t be the first choice in the summer 2021 LEGO Speed Champions line for a lot of people, be they car or LEGO fans. But it’s one that for a number of particular details worked into it, should stand the test of time far better than any one of many previous Speed Champions cars.

It’s boxy in places but so is the real thing; it’s a bit dull in all yellow but that’s the colour Toyota have picked for marketing the car in too. It may not stand out as quite it should, but by all means don’t overlook it altogether. It may not have all the bells and whistles of some of the other cars in Speed Champions, but it remains one to shortlist, for sure.

How long does it take to build LEGO Speed Champions 76901 Toyota GR Supra?

Like many of the modern eight-stud-wide LEGO Speed Champions sets, 76901 Toyota GR Supra takes about 30 minutes to put together – a bit longer if you want to be sure of nailing all the particular details included, though.

How many pieces are in LEGO Speed Champions 76901 Toyota GR Supra?

There are 299 pieces in 76901 Toyota GR Supra, making it the second smallest in the summer 2021 LEGO Speed Champions line.

76901 Toyota GR Supra comes in at 16.5cm long, 7.5cm wide and 5cm tall. That means that whilst it may not be as long as more than half of the other cars in the summer 2021 LEGO Speed Champions range, it’s taller than a number of them.

How much does LEGO Speed Champions 76901 Toyota GR Supra cost?