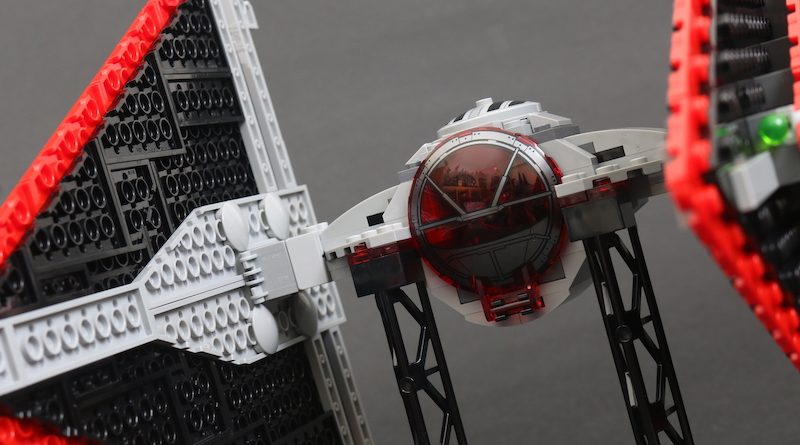 The latest addition to the large LEGO Star Wars TIE Fighter family comes in the form of 75272 Sith TIE Fighter. The colour scheme on 75101 First Order Special Forces TIE Fighter has been inverted back to a grey body and predominantly black wings that begins to bring 75272 back closer in style to the traditional TIE Fighter colourings. That would be, except for the red cockpit window and the very striking use of red along the edges of a pair of eye-catching triangular wings. Where there is clear influence from TIE Fighters throughout the Star Wars canon, there’s also a strong new identity captured in the Sith TIE Fighter and in 75272 as a LEGO model.

That is nearly exclusively thanks to the wings, which measure almost as tall as they are long, coming to distinct points at the front that are expertly highlighted with red lining. It creates a shape and silhouette that is striking from almost any angle, to set 75272 apart from all its previous LEGO TIE predecessors, as well as most other LEGO Star Wars ships that have come before.

The unique wings, however, come with one design consideration that has had to be made out of practicality rather than for aesthetics – the inclusion of a stand. Remarkably, for a smaller piece count than any of the recent trio of 75101 First Order Special Forces TIE Fighter, 75211 Imperial TIE Fighter and 75179 Kylo Ren’s TIE Fighter, 75272 sits apart for how heavy it feels. It may not come in any heavier than its closest relatives, but, such is how that weight is distributed, you can’t help but notice its heaviness.

And, where you may expect the weight to be predominantly at the back of the ship, what with the position of the TIE’s body back there, it is actually strongly weighted towards the front. That means that every time you pick it up and hold it from the cockpit, it naturally falls forwards, finding its most natural balance pointing directly down to the ground.

The stand included returns it to the horizon and does give the model an extra detail for display, but also does hide the fact that, beyond the wings being unable to support the ship due to their shape, that the whole model is weighted so unusually and in a way that makes it quite difficult to hold and play with.

It means that 75272 Sith TIE Fighter has the look, but not the feel. For a ship that offers a genuinely fresh take on design, and that perhaps comes closest yet to George Lucas’s ideal that new Star Wars films should bring with them new ships, new worlds and new characters, 75272 is difficult to do anything with bar place on its stand. One to admire, but not one to touch.

The minifigures included continue to build the collection of characters from The Rise of Skywalker, with an obligatory First Order TIE Pilot joined by another Knight of Ren and the same version of Finn as in 75257 Millennium Falcon. A duplicate, but one of very few across the range, which is testament to the LEGO Group’s understanding that we don’t want 12 Captain Jack Sparrows and eight Luke Skywalkers.

75272 Sith TIE Fighter is an interesting and noteworthy set for a number of reasons, making it a welcome addition to the LEGO Star Wars collection. Somewhat unfortunately, though, its unusual appearance brings with it compromises in design and play.

75272 Sith TIE Fighter is available from December 26 in the UK at LEGO.com. You can help support Brick Fanatics’ work by using our affiliate links.