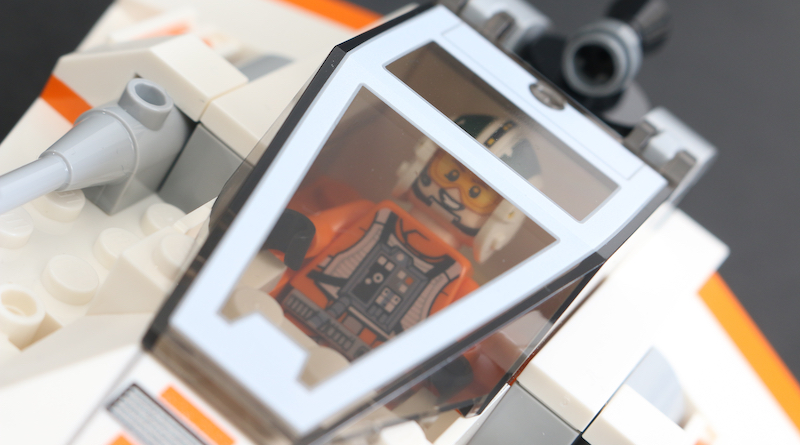 75268 Snowspeeder may be just the latest LEGO Star Wars set in the 4+ range, but, it’s not one to completely write off

Anyone having picked up one of the recent 4+ LEGO Star Wars sets – 75235 X-wing Starfighter Trench Run, 75237 TIE Fighter Attack and 75247 Rebel A-wing Starfighter – will be more than a little wary of what to expect from the latest addition to the Juniors-replacement line for LEGO Star Wars, 75268 Snowspeeder.

This is a sub-theme of sets not for the more experienced LEGO Star Wars fan, but for those first getting into the hobby and attracted to everything that Star Wars can offer, such as some very playable and truly iconic ships. As a result, the range has visited some classics from the original trilogy, but at very basic build levels, meaning large LEGO pieces, uncomplicated structures and no stickers.

There have been a couple of desirable elements included in these sets to entice the older fan, and the collector, such as some of the minifigures and printed pieces, and indeed many more than just the youngest LEGO Star Wars fan will probably own 75237 TIE Fighter Attack for that Death Star display printed window, and the updated Rebel Fleet Trooper.

Ultimately, though, these haven’t been sets for anyone other than the intended age range to be appreciated in play and display for their build. And on the face of it, there’s little to suggest 75268 Snowspeeder is any different. However, in having to follow one of the other parameters to this range – building with a small piece count and to a smaller scale – 75268 Snowspeeder as a set smartly embraces the essence of the two vehicles it is recreating, at the same time as offering potentially something new.

Specifically, the builds are a Snowspeeder and speeder bike, and both are way smaller than the LEGO Group’s previous editions of either. However, for the speeder bike this actually brings the model into a much closer minifigure scale than anything before, whilst for the Snowspeeder, it has the effect of creating a little subsidiary vehicle to the full-size Snowspeeder.

For younger Star Wars fans, this is a Snowspeeder, at a scale and weight much more suitable to their hands, but, for its very efficient use of bricks, it also captures enough of the essence and contouring of the larger minifigure-scale versions of the ship that, for those with a bit of imagination, it fits right into a more mature fan’s collection as a legitimate – albeit non-canon – secondary, smaller one-man Snowspeeder.

It’s cute, it perfectly houses the included Wedge Antilles minifigure and does enough in its design to fall into the Snowspeeder family as its own, smaller thing. Same goes for the speeder bike it is in conflict with, excelling in simplicity to come in at a much better scale than the bulkier bikes the more mature sets produce.

Perhaps we’ve just seen too many Snowspeeders by this stage and are suffering from Snowspeeder blindness. However, we challenge you to build this and not think that, even in following the same design principles as the first three ships in the LEGO Star Wars 4+ line, that there’s not something a little smarter about both vehicles included in 75268 Snowspeeder. There’s certainly something far less cartoonish in proportions to these two vehicles than the previous 4+ sets, and indeed the cousin to the sub-theme, Microfighters.

If you want a taste of the 4+ line without the disappointment of building something just for four-year-olds, 75268 Snowspeeder can actually deliver that. It offers hope for what the 4+ line could become.

75268 Snowspeeder is available from December 26 in the UK at LEGO.com. You can help support Brick Fanatics’ work by using our affiliate links.