The second LEGO BrickHeadz set based on Solo: A Star Wars Story brings the beloved wookiee Chewbacca to blocky life

Solo: A Star Wars Story would not be complete without including Han Solo’s loyal furry friend, his wookiee co-pilot Chewbacca. Many fans are expecting the film to even show the first time that the two characters meet, in what will be a key scene in the Star Wars mythos. Han without Chewie is like bread without butter, so the LEGO Group has adapted both characters into BrickHeadz sets. So will 41609 Chewbacca have you celebrating like it is Life Day all year round? 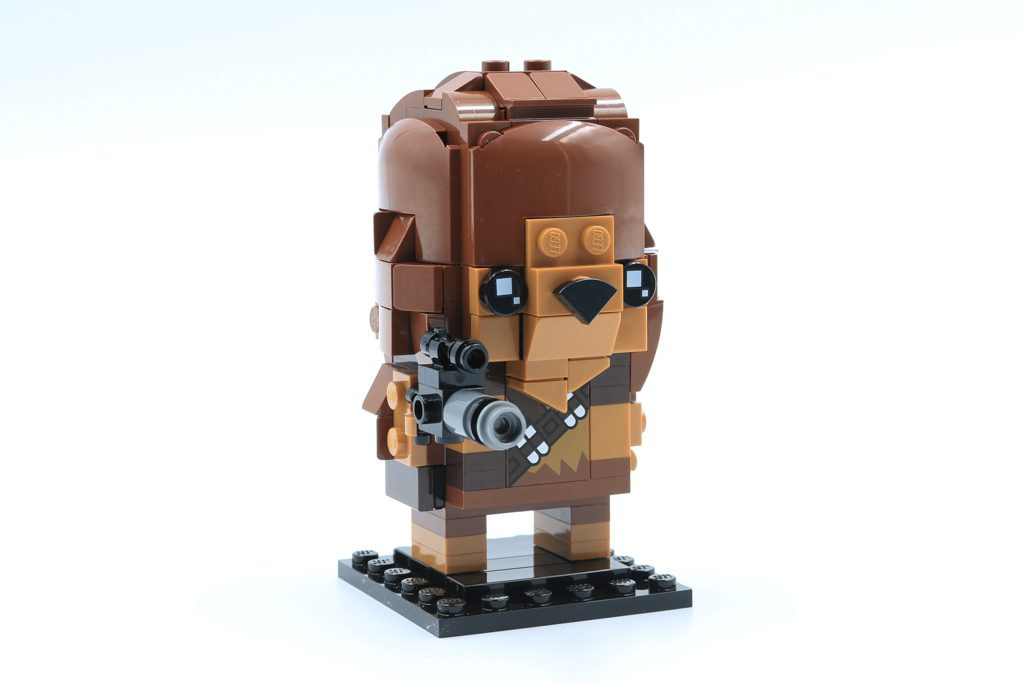 LEGO BrickHeadz are a particular type of stylised build, and some characters work better in the format than others. Unfortunately 41609 Chewbacca does not deliver in all areas. For a start, the model is only slightly taller than an average BrickHeadz character, even though in the films Chewbacca towers over his human friends. When displayed next to 41608 Han Solo, this becomes even more obvious. When did Princess Leia’s “walking carpet” shrink in the wash?

The variations in the fur colouring are another issue with this build – they look far too abrupt and blocky due to the use of large curved pieces. Different colours of Chewie’s fur should be intermingled if film accuracy is what the designers are going for, to create a more natural look. Overall, the colour scheme is fine, it could just have been blended a little more cleverly.

Like all BrickHeadz sets, it’s a quick build and there are some interesting techniques used. One of these is the use of slopes and exposed studs to imitate the layers of Chewbacca’s fur. Printed bricks depict the new bandolier which audiences will see in Solo: A Star Wars Story. This model also introduces Chewie’s blaster rifle rather than his iconic bowcaster, which seems a little odd – it would have made sense for the classic weapon to be included too, giving fans the option of which to equip him with.

Fans of the mighty wookiee may not appreciate this slightly odd looking version of Han Solo’s favourite fuzzball, suggesting that BrickHeadz 41609 Chewbacca will divide opinion. It could be worse, as at least this LEGO Chewbacca is not sporting a super creepy smile…

41609 Chewbacca is available now at shop.LEGO.com. You can help support Brick Fanatics’ work by using our affiliate links.