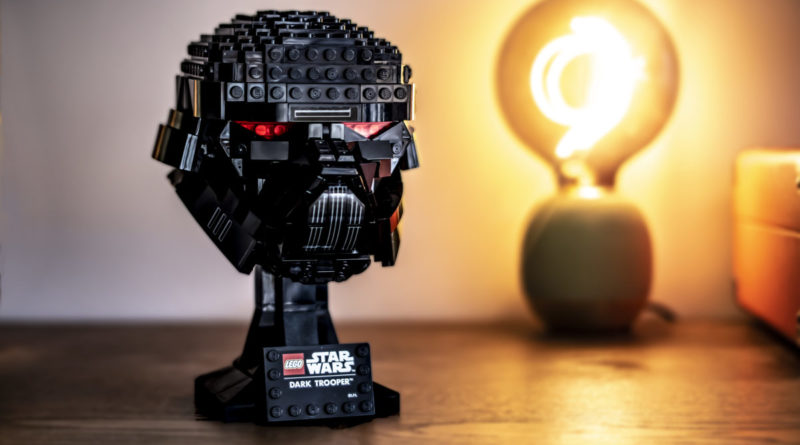 The Empire’s most menacing trooper joins the LEGO Star Wars line-up in 75343 Dark Trooper Helmet, but is it iconic enough to hold its own against more memorable characters?

Introduced during the second season of The Mandalorian, the Dark Trooper is a terrifying new breed of Imperial trooper. Gone are the humans inside suits of (very penetrable) armour, and in their place are highly-advanced droids built for nothing other than death and destruction – making for terrifying foes for Mando and his allies to overcome.

The Dark Trooper is one of two characters from The Mandalorian to be immortalised as a LEGO Star Wars Helmet in this new wave, and with a piece count of 693 it’s the third-largest in the collection behind 75304 Darth Vader Helmet and 75274 Tie Fighter Pilot Helmet.

But as a relatively new entry into the Star Wars universe, will 75343 Dark Trooper Helmet be distinctive enough to warrant its own bust, especially when there are so many other iconic characters we’ve yet to see?

Looking at the box art, you’d be forgiven for thinking that something about this helmet looks a little off. The head looks squashed and the features just don’t look that accurate, but as we all know, sometimes box art can be deceiving – and this set turns out to be a prime example of that quirk.

Unusually, the build begins by constructing the Dark Trooper’s face, a first for the LEGO Star Wars Helmet Collection. The trooper’s menacing red eyes (1×4 trans-red tiles) and striking angular facial details (achieved using a combination of 1×1 and 1×2 slopes) are built on a very involved inner core, which is surrounded by studs on every side.

The Dark Trooper’s armour, as the name suggests, is predominantly black. That means this set is obviously made up of a lot of black pieces too, which can sometimes make the instructions hard to follow. Compared to other helmets in the sub theme, it’s a much more involved and intricate process, so a high level of concentration is required – but it pays off, as there are some really interesting and unusual sub-assemblies that make up the detailing.

The back neck piece is a really neat design, constructed upside down before being attached to the underside of the helmet. The front nose section is also an incredibly detailed and involved section of the build, taking up an entire bag to complete.

The trooper’s angular details mixed with smooth lines have been authentically recreated throughout, and the bottom half feels particularly strong. While the lower section consists of stud-less elements such as tiles and curved slopes, the top leaves the majority of the studs exposed – a smooth dome would have perhaps looked better, but this aesthetic at least ties in with the rest of the helmets in the theme, and as such is an understandable design choice.

What is unique, though, is the display stand. Two hinged plates connected to the top of the plinth allow the helmet to be tilted, authentically recreating the Dark Trooper’s intimidating attack pose. It also offers two ways to display the trooper: either with its head resting back, or pushed forward.

From a display point of view this is a positive, but it does make the latter stages of the build slightly trickier, as adding parts to a helmet on a hinge can be a little fiddly at times – especially considering some of the smaller 1×2 elements are only attached to one stud hanging off the underside, which can easily be knocked off. As well as a high level of concentration, this set also requires a deft touch to construct.

Overall, it looks authentically menacing and fairly accurate to the on-screen troopers. Being all-black makes it a little hard to distinguish the features, especially depending on how much light falls on the model, but this does have the advantage of making the red eyes pop, establishing them as the focal point of the entire set.

The build is also incredibly entertaining, offering up a variety of different techniques and feels advanced enough to warrant the 18+ label – something that cannot be said for some of the other sets in the LEGO Star Wars Helmet Collection.

While the Dark Trooper has proved to be a desirable minifigure, you will have to look elsewhere (75324 Dark Trooper Attack is a good place to start) if you want to add one to your own collection, as no characters are included within this set, or indeed any of the LEGO Star Wars helmets.

75343 Dark Trooper Helmet is the third largest set in the subtheme, and retails at the same price point as all of the others (besides the largest of them all, 75304 Darth Vader Helmet). In previous reviews we have stated the price seems fair for the LEGO Star Wars helmets, and this set is no different. It’s an enjoyable and involved build that results in a stylish and desirable display piece.

While the Dark Trooper may not be as instantly recognisable to casual fans as some of the more well-known characters from a galaxy far, far away, 75343 Dark Trooper Helmet still has enough to offer to make it a worthy set to add to a collection. The build is highly entertaining, with enough unique techniques that even seasoned helmet builders will be surprised. It’s deep and involved and requires concentration to finish – a grown-up model worthy of its LEGO for Adults tag.

It looks excellent, capturing the angular and intimidating look of the Dark Trooper, and having the option to angle the entire helmet down into an attack pose is a great touch. Due to its black colour scheme, it does perhaps lose a little definition at times – but, like the other helmets in the collection, is still a classy collector’s item on display.

How long does it take to build LEGO Star Wars 75343 Dark Trooper Helmet?

75343 Dark Trooper Helmet is a fairly involved build, with a number of intricate sub-assemblies to construct. The predominantly black colour scheme requires more concentration than most helmet sets, so you can expect to spend anywhere between 90 minutes to two hours to finish this model.

How many pieces are in LEGO Star Wars 75343 Dark Trooper Helmet?

While it might initially appear smaller than the rest of the LEGO Star Wars helmets, 75343 Dark Trooper Helmet is actually comparable in dimensions, coming in at 18cm high, 12cm wide and 15cm deep.

How much does LEGO Star Wars 75343 Dark Trooper Helmet cost?