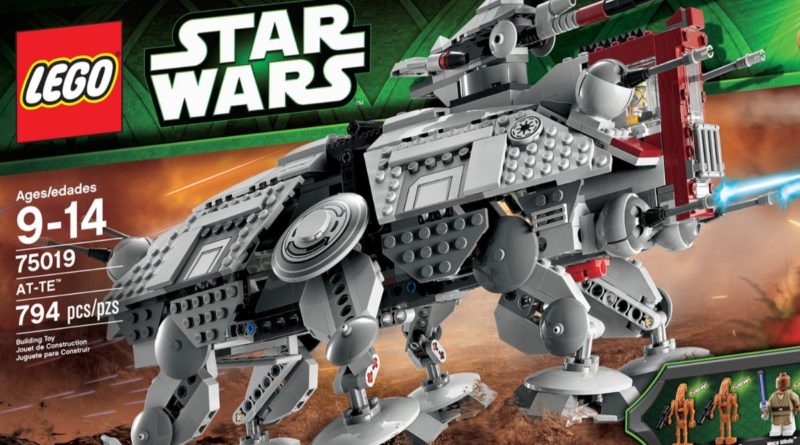 This summer’s LEGO Star Wars line-up may celebrate the 20th anniversary of Attack of the Clones, with an AT-TE and Jedi Starfighter rumoured to be in the mix.

Promobricks reports that the LEGO Group is currently working on an AT-TE to tie in with Episode II’s 20th anniversary, and has linked it to product number 75336, which will reportedly include 924 pieces and retail for €99.99. The size and design of the set are thought to echo the last prequel trilogy version of the walker, 2013’s 75019 AT-TE.

This latest iteration of the Republic vehicle is also said to include a spider droid, but there’s no word yet on which minifigures we can expect to see. If it is indeed based on Attack of the Clones, however – as all logic would suggest anyway – we’re probably looking at a mix of Clone Troopers, Jedi and Battle Droids.

Promobricks also theorises that set 75337 – which it claims will include 1,082 pieces for €139.99 – could therefore be a minifigure-scale Republic Gunship, given the two vehicles have always appeared in tandem previously. But with such similar part counts, the report does acknowledge that this set could in fact be the rumoured AT-TE.

More concrete – at least in Promobricks’ view – is 75333 Jedi Starfighter, a 282-piece set that will apparently retail for €29.99 in Europe. With one eye again on this year’s anniversary, this model is said to be Obi-Wan Kenobi’s red Delta-7 Interceptor, which last appeared in bricks in 2017’s 75191 Jedi Starfighter with Hyperdrive.

That line of thought is corroborated in part by Promobricks’ claim that it’ll include Taun We, the first LEGO Kaminoan minifigure. Obi-Wan’s starfighter, the AT-TE and a Republic Gunship all appeared in the original Attack of the Clones wave in 2002, so they’d make for a fitting way to honour the original release of one of the most maligned films in the Star Wars saga.

Whether we’ll see any further Episode II sets this summer has yet to be confirmed (or even rumoured), but remember that none of these details are technically confirmed at this stage: they’re all just rumours for now, and should therefore be treated with caution.

One thought on “LEGO Star Wars Episode II: Attack of the Clones anniversary sets rumoured for 2022”