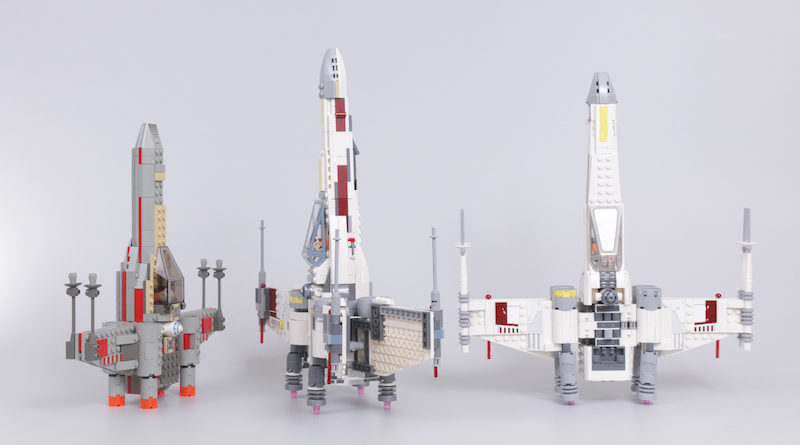 The most recent LEGO Star Wars sets mark a potential new direction for the theme, and one that 75301 Luke Skywalker’s X-wing Fighter demonstrates isn’t all bad.

LEGO Star Wars in 2021 will still bring us huge, high-priced sets of aesthetic beauty and brick mastery. But as the first releases of the year suggest, a humbler, more straightforward avenue may have also begun.

The January 2021 LEGO Star Wars range is, on the face of things, one of the theme’s most underwhelming waves of releases in recent times – for the comparatively low number of sets released, for revisiting too-familiar ships and for the downsizing those ships have experienced. We’re talking specifically about 75302 Imperial Shuttle (review), 75300 Imperial TIE Fighter (review) and 75301 Luke Skywalker’s X-wing Fighter (review).

Each is a set based on a ship that has had more than its fair share of previous LEGO versions released – particularly in the cases of the TIE Fighter and X-wing – and each comes in at a lower piece count than its most recent predecessor.

Whilst we have already alluded to the differences both positive and negative of the budget-conscious TIE Fighter in our review, it is arguably the X-wing that makes for the most interesting wider comparison with respective predecessors. Like the TIE Fighter, its history in LEGO design can be traced back over two decades and, more so than the TIE Fighter, in between has been a very high number of re-releases, updates, re-colours and overhauls.

Equally, where there are obvious compromises made to both 75302 Imperial Shuttle and 75300 Imperial TIE Fighter, there are fewer to immediately spot across 75301 Luke Skywalker’s X-wing Fighter (without saying there are none – just ask R2-D2…).

As it is, in pitting it against two standout LEGO X-wings from LEGO Star Wars’ history – the original from 1999, 7140 X-wing Fighter and the very best from 2018, 75218 X-wing Starfighter – 75301 Luke Skywalker’s X-wing Fighter pays clever (if unintended) tribute to what has come before, and forges an unlikely path forward for LEGO Star Wars as a wider theme.

Decked out in old light grey with tan and red detailing and those bright trans-neon orange thruster outputs, 1999’s 7140 X-wing Fighter clearly sits apart from every other LEGO X-wing that has followed (ignoring 2002’s 7142 straight up re-release). But even from that very different colour scheme through to the outright simpler design and smaller size of the model, 7140 holds a particular charm 22 years on.

Within that stripped back appearance and across an admittedly fragile wingspan is a true classic LEGO Star Wars set that – for getting particular details so very right – sits far more proudly alongside today’s models, compared with some of the blockier, more interpretive designs of the era, such as 7151 Sith Infiltrator and 7190 Millennium Falcon.

Its design is both proportional and accurate, in shape, structure, functionality and even in some of the more specific and important details. The wings open, R2-D2 sits behind the cockpit facing forward, and the length of the starfighter feels suitably proportional to the width of the wings.

Across fewer than 266 pieces (some of 7140’s total was used for a side build) was a LEGO Star Wars set that, in comparison to many of the others it was released alongside and with consideration to being the first of its kind, got so much surprisingly right – something perhaps best reflected in how even more than two decades later, it doesn’t look that out of place alongside its more modern brethren.

That includes even 2018’s 75218 X-wing Starfighter, which set a new benchmark for modern LEGO Star Wars design. At three times the price of 1999’s starfighter and across a far more productive 731 pieces, 75218 took everything that was explored across almost 20 years of X-wing design and almost perfected it.

Indeed, look across the two decades of upgrades that LEGO X-wings went through and it can all be seen in 2018’s near-masterpiece. It was 2004’s Dagobah-based 4502 X-wing Fighter that introduced a more accurately-shaped nose, larger all-round sizing and a play function to open up the wings, before 2006’s 6212 X-wing Fighter took those concepts further whilst cleaning the colour scheme.

In 2012 came a design that smoothed over the bodywork, played around with the design of the thrust engines, introduced a more accurate representation of the laser cannons and flipped the wings on the underside upside down. It also further improved the wing-opening mechanism, but not without the unusual issue of turning R2-D2 90 degrees to face out the side of the starfighter.

It was 2015’s 75102 Poe’s X-wing Fighter and 2016’s 75149 Resistance X-wing Fighter that advanced the overall detail across the ship (including a new canopy), albeit with different paint jobs and slightly different designs to reflect the sequel trilogy they were from. Even so, it is significant to consider what they advanced for the LEGO X-wing’s overall design, particularly around the wing mechanism and incorporating it into the top of the model, all the while maintaining an improved aesthetic.

That approach, as well as all that was improved model by model in the LEGO X-wing’s design, carried over into 2018’s 75218 X-wing Starfighter, alongside a revised and even further improved wing mechanism that did away with slowly turning a dial in favour of a far simpler, more play-immediate snap action. The single move of a lever to flick open the wings may be a bit faster than is film accurate, but it caught the spirit of handheld play and was perfectly matched with a counter-mechanism whereby simply landing the vehicle would close the wings again.

From where we started in 1999 to where we were in 2018, that mechanism represented a remarkable journey in design. Indeed, 75218 X-wing Starfighter still marks the pinnacle of LEGO X-wings, packing in all the detail, functionality, scale and accuracy that was developed over the previous two decades (including turning R2-D2 back to facing front).

But it came at a cost. Where 2015 and the launch wave of sets for The Force Awakens really set a new boundary for what a LEGO Star Wars set could retail for (including 75102 Poe’s X-wing Fighter at an eye-watering £69.99), 2018’s marvellous model took things to a new, testing level of £89.99. Twenty years may have near-perfected the design and functionality of a LEGO X-wing, but it had also trebled the price.

That was brought about by a piece count of 731 bricks (as well as some expensive dual-moulded helmet designs that haven’t been reproduced since), which – combined with the inflated price tag – also highlighted a potentially completely different type of issue. For the ingenuity that went into 2018’s model and for all that it represented in advanced LEGO design, it also marked the physical limits of such a set.

75218 X-wing Starfighter comes in at nearly double the weight of 1999’s 7140 X-wing Fighter, and this is felt most noticeably in the wings, which actually sag under their own weight. When is it too much LEGO? When the model can’t support itself and when it costs too much to consider it a toy first.

Until the particular issues of such a bloated piece count and price can be addressed, 2018’s 75218 X-wing Starfighter will remain the peak in LEGO Star Wars X-wing design, and also the capacity of the theme at its limit. And that’s where 2021’s 75301 Luke Skywalker’s X-wing Fighter comes in for the interim, and sits far more comfortably than first impressions have otherwise allowed.

Dialling back the piece count by a third and halving the price, 75301 represents LEGO Star Wars in moderation. What has been a golden age of accelerated design has also been a time of ever-increasing piece counts and prices, and 75301 purposefully takes a step back. The design team has clearly embraced the challenge of working to a tighter budget – as our review reflected, there are ‘pockets of detail’ throughout the model, and it’s one to be enjoyed.

It is lighter, smaller, more affordable and, even with some clear design compromises to overcome (poor R2-D2 again…), true and smart in how it has been put together. There are shades of the simplicity and charm from 1999’s 7140 X-wing Fighter just as much as there are design traits true to modern LEGO Star Wars and apparent in the bigger 75218 X-wing Starfighter from 2018, and it’s all within a model that has been designed to a different priority.

While the concept of scaled-back LEGO Star Wars sets isn’t without its issues to address moving forward – more easily felt in 75302 Imperial Shuttle (review) and 75300 Imperial TIE Fighter (review) – and it does feel like a missed opportunity to apply a new and more accurate colour scheme, it does represent an interesting path for the theme to potentially explore.

Clearly. with the advent of the 18+ theme and the LEGO Group’s increasing focus on a growing adult consumer market, the large-scale, big-budget LEGO Star Wars sets of recent years will continue to come (and 2021 has a lot to come…). But for sets we’ve seen many a version of produced in the past. and considering the primary audience LEGO Star Wars is for, this almost-subtheme of scaled-back sets represents a different kind of potential to be explored, improved further and hopefully appreciated in the months and years to come.

This copy of 75301 Luke Skywalker’s X-Wing Fighter was provided by the LEGO Group.

You can support the work that Brick Fanatics does by purchasing your LEGO Star Wars sets large, small and in-between through one of our affiliate links. Thank you! 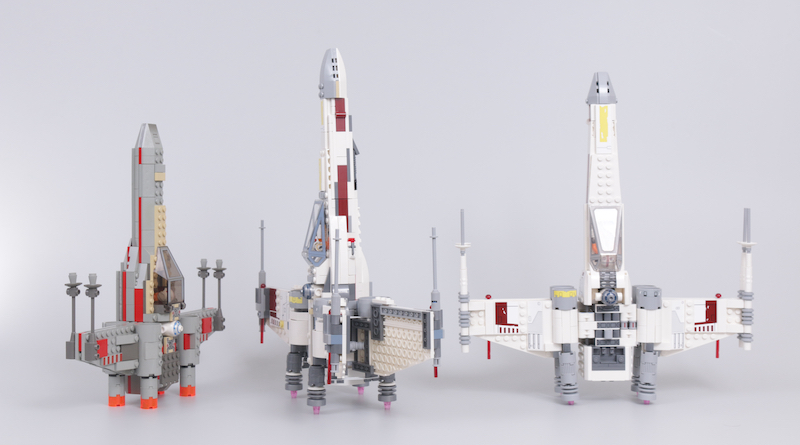