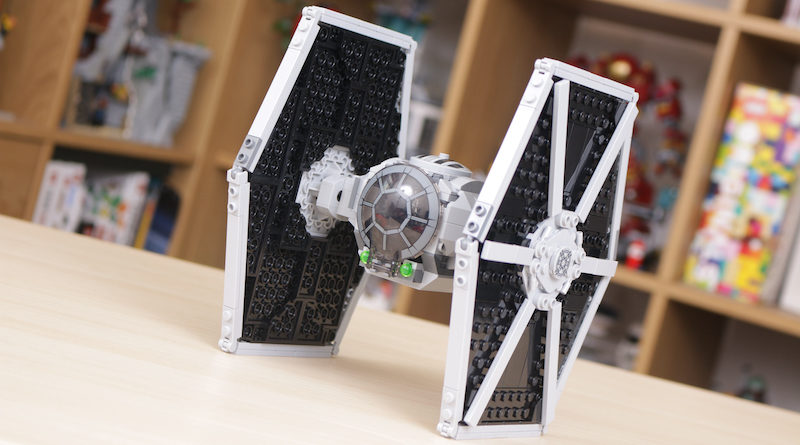 After years of ships within the LEGO Star Wars galaxy increasing in size and price every few years, 75300 takes a few steps back. For far less money, here’s a smaller, more compact version of a well-known starfighter. At this lower budget, then, what compromises have been made, and ultimately, do they matter?

The LEGO Group’s affinity with the TIE Fighter stretches back 20 years, to 2001’s 7146 TIE Fighter, but for all the sets since labelled with that name, there are relatively few to actually compare 75300 Imperial TIE Fighter to.

Disregarding the age-limited 4+ 75237 TIE Fighter Attack from 2019, the most recent and applicable comparison to hold 75300 to is with 2018’s 75211 Imperial TIE Fighter. And for all the consideration and respect that 2021’s 75300 deserves in review by itself, the first thing most LEGO Star Wars fans will do is compare, and for good measure, as it’s the most obvious ways things are different.

At the same time, where 75300 Imperial TIE Fighter’s wings and central body come in much smaller, the cockpit remains pretty much the same size as that of its bigger brother from 2018, using the same canopy piece and an identically-sized (if slightly differently designed) interior to fit a minifigure pilot.

It is that discrepancy in scale between the smaller wings and same-sized cockpit that gives 75300 Imperial TIE Fighter its more unusual, Chibi-style design, and is what ultimately accentuates that there are smaller proportions and exactly where those are.

75301 Luke Skywalker’s X-Wing Fighter [read our review] and 75302 Imperial Shuttle [read our review] that released alongside 75300 Imperial TIE Fighter are both similarly shrunken down, but due to the style and shape of those ships, they do not suffer the same disproportional look. Indeed, 75300 Imperial TIE Fighter is very much alone. It is noticeably smaller than what has come before, and owing to the priority of play over accuracy, its proportions are noticeably off.

But it is a LEGO Star Wars set that is budget-conscious, and when was the last time we were able to say that about anything from this theme, probably ever? Since 2015 and the exceptionally high-priced range that released ahead of The Force Awakens, the price and size of Star Wars sets has increased immeasurably. It makes for a fantastic collection for those with deep pockets, but one that has increasingly been inaccessible to the rest of us.

75300 Imperial TIE Fighter prioritises bringing the TIE Fighter back to a wider audience, and whilst it certainly means compromises are made – and the choice in keeping the cockpit that big is going to divide opinion – it’s ultimately no bad thing. In its own right, 75300 is an intuitively-designed Star Wars ship.

Even if scale and proportions are different, the way the model comes together still achieves a remarkably accurate aesthetic – you know this is a TIE Fighter and it ticks all the boxes as such. In many ways, it also feels like the smartest TIE Fighter design yet, with the LEGO Star Wars team almost relishing the challenge of the reduced piece count to still create such a well-rounded central cockpit and some complex shaping in the wings.

A far more suitable, playable size for younger builders, there’s little in the model’s design that is disrespectful to older builders. Whether the compromises are too much to accept or not, 75300 Imperial TIE Fighter represents good value at a lower price, and a fun and certainly different design of an otherwise well-worn staple of the LEGO Star Wars theme.

75300 Imperial TIE Fighter comes with three minifigures – a TIE Fighter pilot, an NI-LS droid and one of the uglier new Stormtroopers. They add a level of play and collectability to the set, but really, the sooner LEGO Star Wars moves away from that oversized Stormtrooper helmet, the better all our collections will look.

This is where 75300 Imperial TIE Fighter shines. It’s a well-designed LEGO Star Wars set of a highly-recognisable ship from the original trilogy, and whilst its reduced piece count means it comes in at a smaller size and at unusual proportions, it remains otherwise true to the source material.

This is an enjoyable version of the TIE Fighter that perhaps shouldn’t be taken so seriously and for serious collectors, the price will allow as much. For £34.99, it represents better value than a lot of other LEGO Star Wars sets, and while it’s still no small amount of money, it does allow for more enjoyment and play to creep into the all-round experience of this set.

There are things to obviously criticise 75300 Imperial TIE Fighter for, and with what came before it in mind, most immediate comparisons are not going to be favourable. However, for its purpose as a cheaper version of an otherwise over-visited ship in the LEGO Star Wars theme, this set brings a new dimension and philosophy to the table.

With the advent of the 18+ line of sets and the LEGO Group’s continued focus on the adult market, trust that the big, high-end sets of ultimate scale and accuracy are still to come. For those looking for more immediate fun and play, all within a model that is still intelligently designed, 75300 Imperial TIE Fighter does not disappoint, and with something that does compare very favourably to all its predecessors – its price.

Support the work that Brick Fanatics does by purchasing your LEGO Star Wars sets of any size and proportion through one of our affiliate links.

How long does it take to build 75300 Imperial TIE Fighter?

75300 Imperial TIE Fighter takes approximately half an hour to build across three sets of numbered bags. The build is relatively simple and slightly repetitive, but the end model is an effective and smart use of the bricks available.

How many pieces are in 75300 Imperial TIE Fighter?

How much does 75300 Imperial TIE Fighter cost?