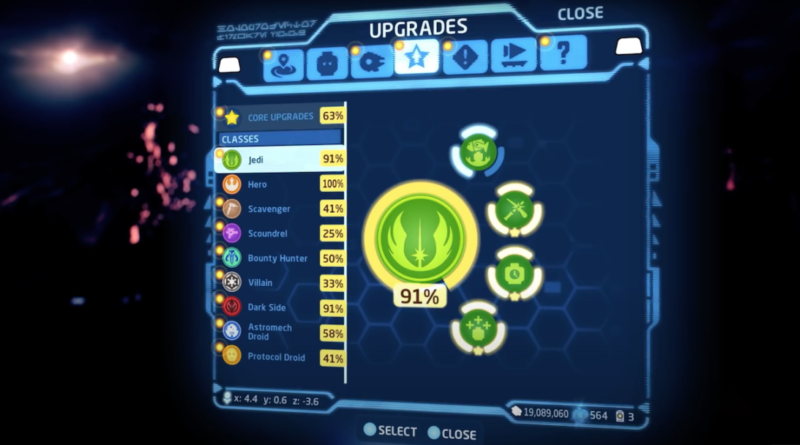 When LEGO Star Wars: The Skywalker Saga arrives on April 5, it will do so with another all-new feature — character classes.

Previous LEGO video games have let you select from an endless multitude of playable characters, but LEGO Star Wars: The Skywalker Saga is adding a new spin on what happens when you choose your hero or villain.

Characters in the game fall into one of nine classes: Jedi, Hero, Scavenger, Scoundrel, Bounty Hunter, Villain, Dark Side, Astromech Droid and Protocol Droid. Each class then has one of four additional abilities which can be upgraded up to 100% by using collectible Kyber Bricks. This essentially adds an RPG-style element and depth to what are usually fairly-straightforward action games.

In the recently-released overview trailer, the Upgrades menu briefly shows the classes and some of the extra abilities, with a Core Upgrades option that can also be completed. We get to see Rey selecting from Breaker Blaster, Glider and Net Launcher options to reach new heights, which may suggest she acquires these abilities as the game progresses and her Scavenger class is upgraded.

Also glimpsed in the trailer are Han Solo ‘sensing opportunities for impressive shots as a Scoundrel’ and Boba Fett ‘unleashing shock grenades as a Bounty Hunter’. Even poor C-3PO gets in on the action, demonstrating that he can detach the upper part of his body to move through small gaps. Handy, eh?

Drilling down even further into the Dark Side class, we can see that characters are given four abilities to upgrade. Each of these options then has three levels of upgradability, with each level costing LEGO studs and Kyber Bricks. For the Dark Side the abilities are:

Fear the Dark Side — Enemies and civilians will have an increased chance of running away in fear, and from a further distance.

Power Push — Force Push will knock back more enemies and objects over a wider range.

Dark Rise — Boost the power and capabilities of Force Lift.

We’re really interested to such just how much these new character classes and additional abilities affect the overall gameplay when LEGO Star Wars: The Skywalker Saga arrives on April 5.