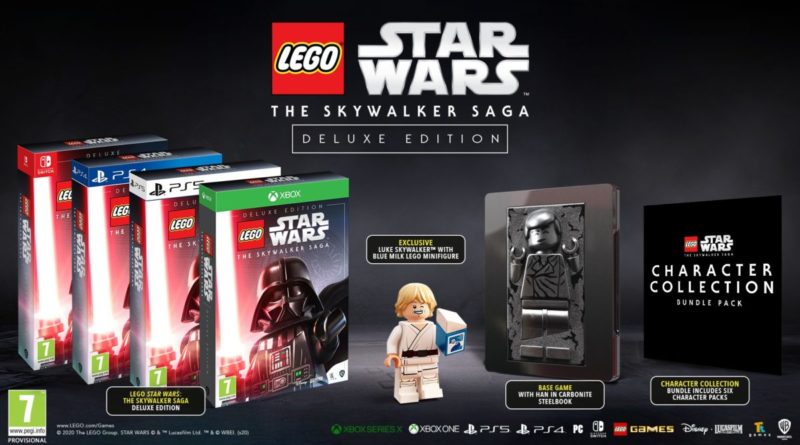 It appears that UK retailer GAME may have stopped taking pre-orders for some versions of LEGO Star Wars: The Skywalker Saga.

LEGO Star Wars: The Skywalker Saga is due out on April 5 and excitement continues to ramp up for the game’s release. IGN Fan Fest recently posted an interview with TT Games director of production, Jonathan Smith, and a Developer Diary video, both of which contained plenty of new footage and information.

However, those of you wanting to snap up anything other than the Standard Edition of the game may want to move quickly. It appears that GAME in the UK may have stopped taking online pre-orders for both its LEGO Star Wars: The Skywalker Saga Carbonite Edition and the Deluxe Edition. The former includes an exclusive Han Solo in Carbonite Steelbook in addition to the Deluxe Edition’s 30625 Luke Skywalker with Blue Milk minifigure and Character Collection DLC packs.

The GAME site currently states, ‘Sorry, this product is currently out of stock, but might be available in store.’ On checking with a local GAME store, we were told that they were not taking any more pre-orders for either version, although it should be noted that was just in one location. There’s been no official word from GAME as to whether more copies of both games will eventually be back in stock, if at all. Standard Editions of the game on various platforms are still available for pre-order from GAME’s website.

In the UK the physical version of the Deluxe Edition of LEGO Star Wars: The Skywalker Saga is still available from some retailers, including Amazon, with the online retailer offering an exclusive Classic Character Pack DLC with Standard Editions of the game.

LEGO Star Wars: The Skywalker Saga will be launched on April 5. For more information, be sure to check out our pre-order guide here.