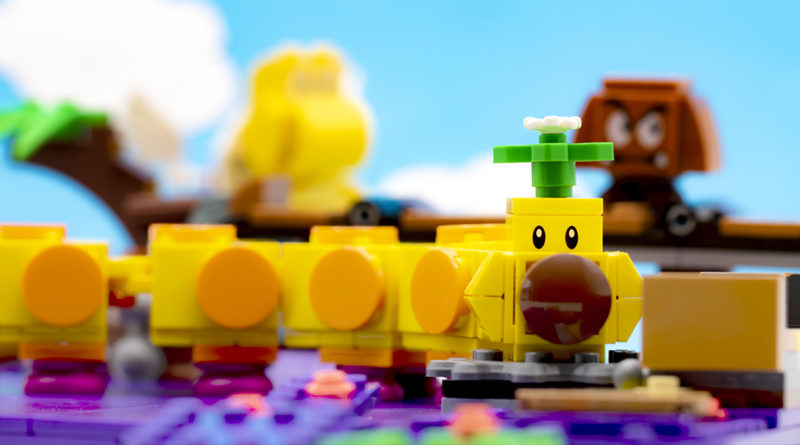 After a successful first wave of brick-built adventures, LEGO Super Mario is back in 71383 Wiggler’s Poison Swamp – and this time, he’s heading deep into the Mushroom Kingdom’s poisonous swamp lands.

Introducing new characters, new play features and a host of new parts, will the journey into 71383 Wiggler’s Poison Swamp be a rewarding enough experience to add it to your LEGO Super Mario collection?

Before the build can commence, LEGO Super Mario will need a quick update via the app in order for him to be able to interact with all the new elements contained within the set. The most notable of these are the purple surfaces and plates, many of which are brand new for 2021, as well as the new action tiles. Purple represents the new poison swamp environment. If Mario steps on any purple surfaces for too long, he will become poisoned and unable to collect coins until he is healed (water surfaces will speed the healing process up).

One criticism that has been directed towards the LEGO Super Mario theme is that the building aspect of the sets is often quite basic, but with 71383 Wiggler’s Poison Swamp there are at least a few elements that require a decent amount of construction, including Wiggler himself.

First appearing in Super Mario World, Wiggler is a harmless caterpillar who minds his own business until Mario bounces on his head, at which point he turns red, becomes enraged and hunts Mario down seeking revenge. (It’s pretty understandable, really.) Thankfully, Wiggler here is based on his more placid, yellow form and is actually one of the most involved brick-built characters in the entire theme, requiring 119 parts.

Each of the four body sections are assembled separately and attached to one another via 1×2 plates with vertical shafts placed into 3×2 plates with holes. This allows each section to very appropriately wiggle back and forth. His head piece, also a separate sub-assembly, does a wonderful job in recreating the on-screen caterpillar’s face, and once completed it’s a very faithful rendition of the character as a whole.

Wiggler’s swamp area is constructed from two purple 8×16 tiles, giving the set a considerable floor space when compared to others in this price range, and Wiggler attaches to a splat gear at one end. At the side is a small bridge that Mario must use in order to safely cross the swamp. However, in order to uncover the bridge Mario must first ‘defeat’ Wiggler.

To do this, a small moving platform is built in front of Wiggler. Placing Mario on to the platform and moving him side to side will force Wiggler to flail around the swamp and, if done just right, will hit a switch on the bridge allowing it to fully fold out – but watch out, there’s a Goomba (with an exclusive face print) hidden within the bridge that Mario must also defeat.

The moving platform contains an action tile that plays an exclusive tune from Super Mario World for the duration Mario is on the platform. Once across the bridge Mario can use a brick-built raft (which also plays music from Super Mario World) to help make his journey through the swamp a little easier.

The set also contains an exclusive Para Koopa Troopa, built using the same techniques as previous iterations, including the use of several printed parts for the eyes, nose and stomach. The wings attach to 1L bars with clips either side of his special shell element, and when placed onto a trans-clear bar it creates the impression he’s hovering above the set. The Para Koopa Troopa requires two bounces from LEGO Mario to defeat, yielding a couple of coins as a reward.

Finally, a small platform off to the side of the swamp contains a Star power-up that will help Mario defeat the enemies within the set much quicker, or will help him on his way if the set is connected to others in the theme.

Three characters are included within the set: an angry-looking Goomba, a red-shelled Para Koopa Troopa and the eponymous Wiggler, all of which are exclusives. Mario’s most famous enemy, the Goomba, has been seen in numerous other LEGO Super Mario sets, but here he has an angry face that’s exclusive to this set. The Para Koopa Troopa is also based on previous designs but has a specially-designed shell piece allowing for the wings to be connected to the back, and requires two stomps from Mario to be defeated.

Wiggler is a brand new design and only found within this set, and as a result he’s definitely the stand-out character – but due to how he is incorporated into the swamp, it’s pretty difficult to integrate him into other sets. However, his design is excellent and incredibly accurate when compared to his video game counterpart.

A lot has been said about the price of previous LEGO Super Mario sets and whether the price tag fairly reflects what’s inside the box, especially when considering the building experience is often very pared back, but 71383 Wiggler’s Poison Swamp feels like it’s getting closer to something acceptable. It’s still a little pricey for what it is, but when you take into account that it’s a larger set with 374 pieces, contains three exclusive characters, five action tiles and some creative play features, it starts to feel like better value than most.

All that being said, you still need to have the LEGO Super Mario 71360 Adventures with Mario Starter Course to be able to get the most out of this set and if you are purchasing both together as a first time buy, things can start to get expensive.

The LEGO Super Mario theme has at most been a huge success. It’s not a conventional LEGO experience by any means, and those looking for a more traditional building experience may be disappointed with the simplicity with which many of the sets come together. However, the entertaining and creative play features, combined with faithful recreations of the source material and the ability to mix and match sets within the theme, offers more longevity in a unique way. It’s a hybrid of traditional LEGO, board games and video games all at the same time.

With all that in mind, 71383 Wiggler’s Poison Swamp feels like a strong set within the theme. The exclusive characters, especially Wiggler, look fantastic and the new swamp environment adds a nice level of variety to the existing sets. The play features are really fun to use, and watching Wiggler slide back and forth across the swamp while listening to music from Super Mario World is very enjoyable.

The price is something that could potentially be off-putting as it’s a little on the expensive side, but it all depends on how much you enjoy playing with LEGO Super Mario and how often you will incorporate the set into your custom-built levels. For fans of the theme, though, it’s definitely a set that will offer some welcome variety.

Support the work that Brick Fanatics does by purchasing your LEGO Super Mario sets using our affiliate links. Thank you!

How long does it take to build 71383 Wiggler’s Poison Swamp?

Expect to set aside around half an hour to an hour depending on age and experience. The most complex aspect of the set is Wiggler, who is built from 119 parts. Although the build won’t take long, it’s actually one of the larger sets within the theme thanks to the 8×16 purple tiles.

How many pieces are in 71383 Wiggler’s Poison Swamp?

There are 374 pieces contained within 71383 Wiggler’s Poison Swamp. 119 of those will make Wiggler, 28 are used for the Para Koopa, 10 for the Goomba and the rest are used for the poison swamp and surrounding terrain.

71383 Wiggler’s Poison Swamp is one of the larger LEGO Super Mario sets, coming in at 31cm wide and 26cm deep.

How much does 71383 Wiggler’s Poison Swamp cost?