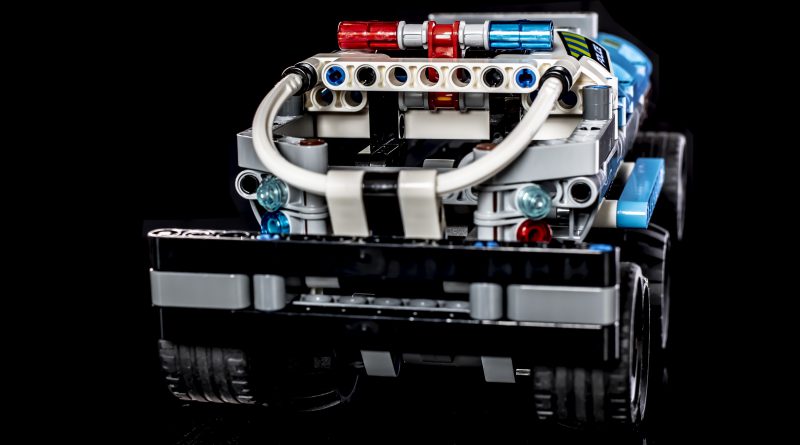 What happens when you combine the LEGO Technic 42091 Police Pursuit and 42091 Getaway Truck? You get The Ultimate 4×4 – but is it double the value, or half the fun?

One of the most appealing aspects of LEGO Technic is the alternative online instructions that are available for all but a few of the sets. This offers fans the chance to build a completely new model out of the parts they already have and is part of the advanced theme’s long tradition.

The Ultimate 4×4 is slightly different in that it requires the parts from both 42090 Getaway Truck (review) and 42091 Police Pursuit (review) to form a hybrid off road style police vehicle that features not one, but two pull back motors. 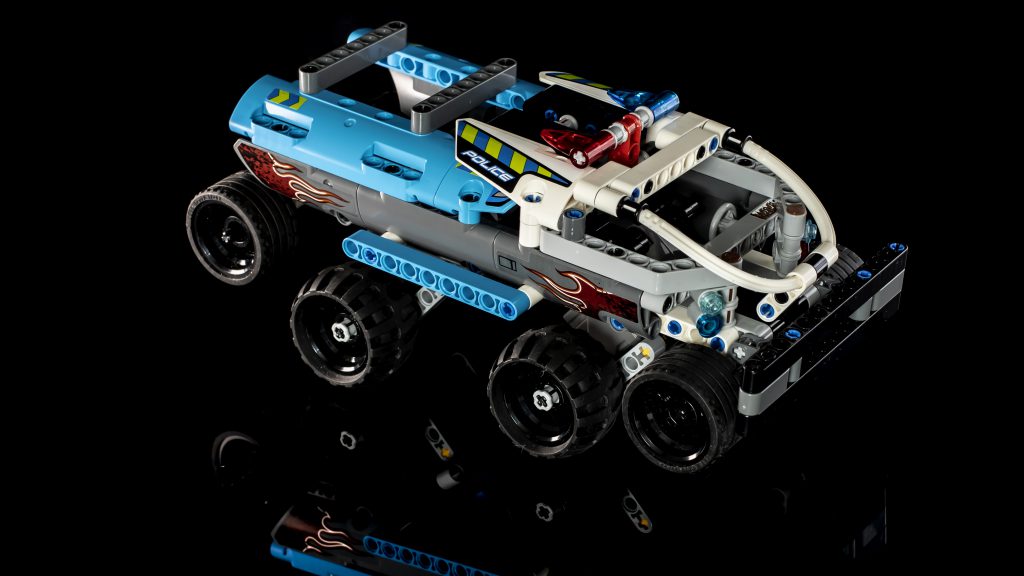 The process begins by dismantling both sets. Not the simplest of procedures due to the robust nature of LEGO Technic connections but thankfully the two sets have fairly low piece counts and so wing up in pieces in very little time.

The build itself is very straightforward, starting with the frame work and connecting the two pull back motors before moving onto the body work. Being made from two vehicles, the body work is bigger than either individual set and is decorated with both Police and Flame decals. It is both a quick and unsatisfying experience.

The completed model is a very strange looking thing and while it utilises almost every part from the two sets, some of the design is unnecessary. The wheels at the front and back seem to serve no purpose at all. Perhaps these would have been better off positioned lower to make an eight, rather than four wheeled vehicle?

The design looks awful from every angle. The back is huge yet hollow and completely exposed. The sides look bizarre with the aforementioned hovering wheels and the front looks blocky and flat.

Surely though having two pull back motors rather than one will make this an absolute beast in the speed department and be something of a redeeming feature? Not quite. If anything it is slightly slower than either 42090 Getaway Truck or 42091 Police Pursuit thanks to the extra weight.

While it is nice to offer fans the opportunity of combining both sets to form a bigger vehicle, in doing so they lose out on the biggest selling point of both 42090 Getaway Truck and 42091 Police Pursuit – being able to race them together and crash them into one another.

Building from online instructions is nowhere near as satisfying than using a physical manual and the overall design of the Ultimate 4×4 does not live up to that of either of the other two sets. Ultimate 4×4? An Ultimate let down.

42090 Getaway Truck and 42091 Police Pursuit are available now at shop.lego.com. You can help support Brick Fanatics’ work by using our affiliate links.