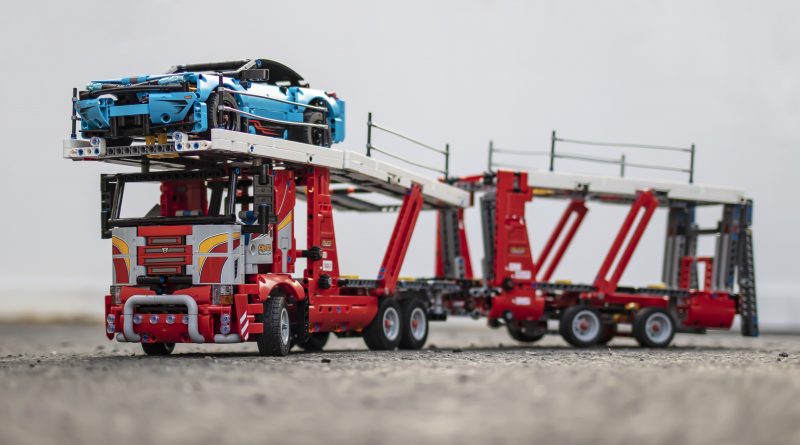 Measuring over a staggering three feet long with the ramp fully lowered, LEGO Technic 42098 Car Transporter certainly packs it in the size department – but does bigger equate to better?

If there is one thing– and there are many – that LEGO Technic does well it is cars, but up until now fans have had no way to transport their fleet around, expect for laborious moving them one by one to a new destination. That is up until now with the release of an automotive behemoth, that just happens to be the LEGO Group’s largest vehicle ever (by length), Technic 42098 Car Transporter. Consisting of 2,493 pieces this set is almost like three builds in one. An azure blue American muscle style car, front cabin and trailer and the entire rear section all feel very different in their construction yet go together to form an absolutely fantastic Technic set. 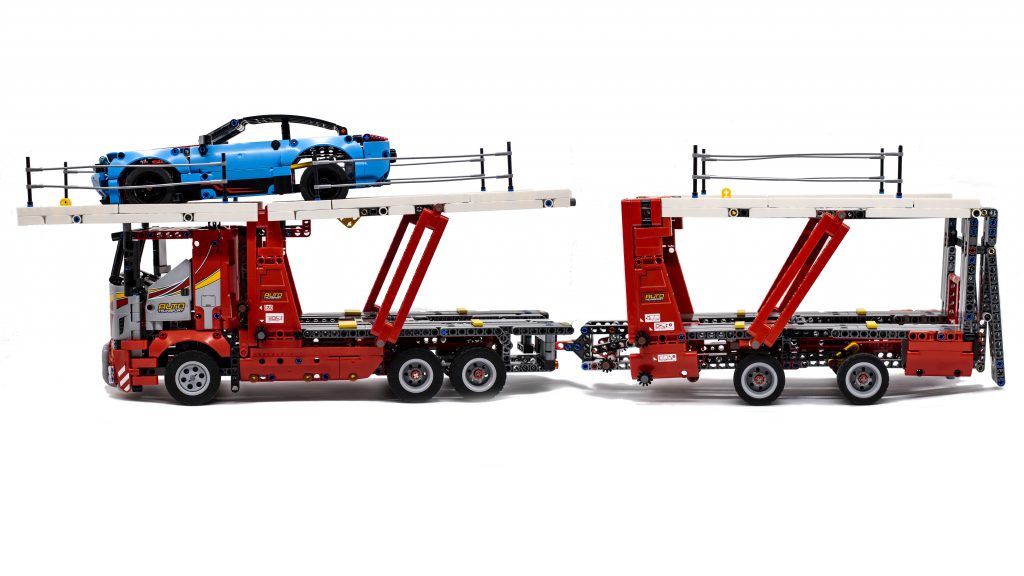 Initially this could be a completely overwhelming set for all but the most die hard and dedicated Technic fans. The box is absolutely gigantic and the manual is a whopping 544 pages long. Thankfully, every bag is numbered and the entire build can be undertaken in small steps rather than tackling everything at once. It certainly makes for a much more manageable and enjoyable experience than some of the other large Technic sets released this year.

First on the building agenda is the American muscle car. Its a very sleek looking thing that bears more than a passing resemblance to the 42093 Corvette ZR1, which was released back in January of this year. It shares similar shaping but there are a few different techniques at play, most notably the steering. The Corvette used a more traditional gear system, whereas here the steering is taking care of by a regular CV-joint.

Despite coming together fairly quickly the build is very enjoyable and the overall look is brilliant. The angles created at the front look excellent. It looks powerful, mean and muscly, perfect for this style of car. The body work in places feels like one solid unit rather than a number of sub assemblies. There’s an opening hood allowing the builder to check out the ‘junk in the trunk’, which is a nice little addition and the use of the trans-light blue elements for the front headlamps is an aesthetically pleasing choice. This could easily have been released on its own and would have made a nice little set but here it forms just the tip of the massive Technic iceberg. There is enough space to fit four of these cars onto the transporter so it gives you some idea of the huge scale.

The build for the truck’s cabin and trailer once again begins with assembling a complex gear system, this time it is far more involved and deep than the muscle car. Its a long process but a very satisfying one when all the cogs and gears slowly begin to fit together bringing the inner workings to life.

Next the build moves onto the frame work and cabin, again its a long process but still very enjoyable. Despite its size nothing ever feels too laborious or repetitive, which all things considered is some achievement. The frame work is nearly all Technic elements but there are a few system bricks that make their way into the build. The 2×2 brick with trans-clear and trans-orange sloped pieces used for the front headlamps is simple yet effective looking, as are the 2×4 and 1×2 tiles used for wing mirrors.

The cabin is a particular highlight of the build, especially the front bumper. It’s an incredibly fun sub assembly to put together, with shaping on the grille coming from the technic tubing pieces. It’s not only fun to assemble but looks great too. The build for the top layers feels very deep and involved – it is the most labour intensive area – but the mechanism for lowering the platform works brilliantly and is an utter joy to operate.

The final section to build within the set is the rear trailer. Fans might be surprised to discover that it feels quite different to the front and cabin sections. With the exception of the trailer beds themselves, there is fairly any repetition and it’s all the more enjoyable experience because of it.

This section also contains the most working features, including a lowering top section, extendable ramp and two moving front ramps, which help connect the front and rear trailers together. Every feature works perfectly and is honestly so much fun to operate. Watching such a huge vehicle raise and lower with twists of a cog is a true sight to behold and rewards the builder with a real sense of accomplishment.

The overall look of the car transporter is a wondrous thing. Regardless of the size, it looks incredibly accurate to its real life counterparts and really comes into its own once one or more cars are placed on top or below. Technic sets more than anything rely on stickers to add the necessary details and in this instance they look fantastic too, really adding to the final look.

Due to it’s size, LEGO Technic 42098 Car Transporter could seem like a daunting undertaking – yet the complete joy of the build, with each section feeling like its own separate model, coupled with the immense playability of this set means it comes highly recommended.

42098 Car Transporter is available now, exclusively at shop.lego.com. You can help support Brick Fanatics’ work by using our affiliate links. 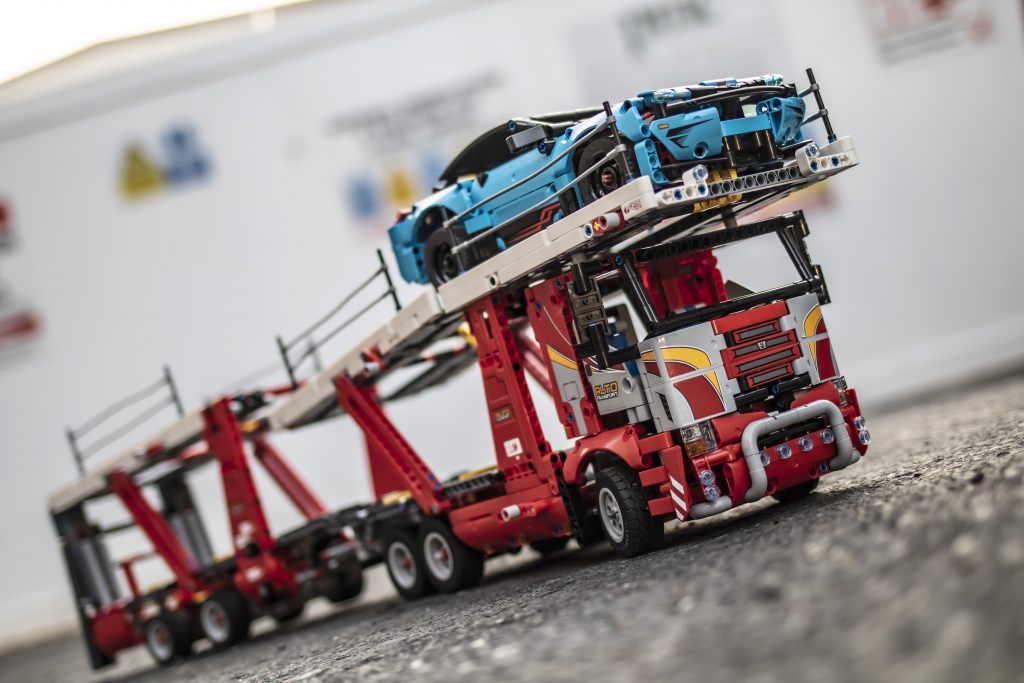