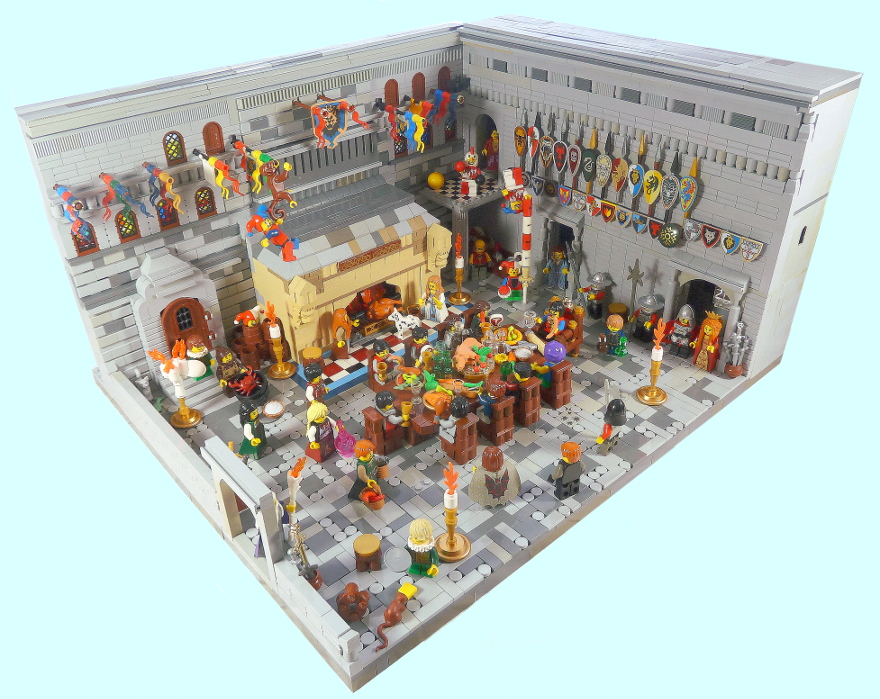 Welcome to another Nick’s Corner where, this week, I’m taking a look at a Medieval-style build I created a couple of years back entitled ‘The Evening Before Battle’. This was one of my first large scale builds and the first along the castle style theme. It was inspired after seeing the rather spectacular Tigelfah Castle and town, built by the chaps from Brick To The Past. You can see it on their website along with the group’s other great builds here http://www.bricktothepast.com/.

As with most of my MOCs I didn’t really have anything planned so just started to build. After a rummage around in my tan/brown drawer (Yes, I sort by colour) I came across some of the lion head bricks and started to build. Slowly after a little messing around I’d created a fireplace and with that I had some sort of idea of where the build was heading. Once I was happy with the fireplace I sorted the base plates which for some strange reason were a rather larger area than I’d normally use, but which of course gave me lots of space to fill with those little details I love.

With a lovely looking bird slowing cooking on my newly created fireplace I needed to add a few guests to eat it, a table, some chairs, a little light entertainment and of course some walls to keep them all contained.

Having played around with both the table and chairs to get the correct dimensions for the guests I started adding those all-important finer details. With a build like this, once you have the shell it’s easy to add more and more detail, but very easy to add too much.

As you can see it’s a feast fit for a King and a few of his buddies. Not sure I’d be that keen on a piece of chicken below though.

The food was second to none,  even if the serving wenches were a little hairy around the chops.

Some even had live crabs as well!

So here it is in all it’s full glory from a couple of different angles.

It’s a build I’m still rather proud of and hope you enjoyed looking at. Maybe I’ll recreate something along these lines again.

Until next time, happy building and “Play Well”.