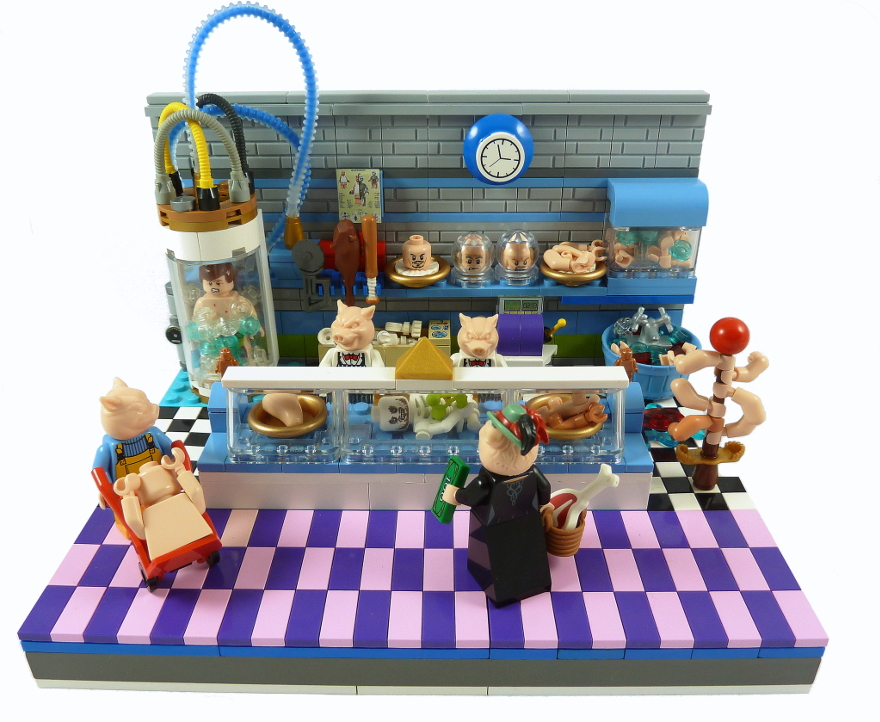 In this weeks corner I’m going to speak about and show some pictures of what some consider a BIG no no in the world of AFOL’s…… Third-Party Parts !

Third Part Parts are non-Lego parts manufactured by someone other than Lego, but work with Lego products. The main market in third party parts is weaponry there’s some great items from BrickArms and BrickWarriors, there’s also other items like guitars and food items made by BrickForge all great for adding that extra detail to your build with items that Lego don’t or won’t make. To lighten the mood I’ll also speak about custom printed parts these are a little more excepted in the AFOL world as they are genuine Lego parts but printed by a third party like Firestar Toys , Minifig Me and Minifig For Life I’m going to add a few of my builds which have used these in as some sort of softening blow after all the dirty third party talk.

Any of my Flickr or Instagram followers will know I’ve used many a custom printed item in many of my builds, but it took me a while before I bought and used some third party pieces. I started off with a splat here, a few hats there and maybe a few bottles and flasks, but it wasn’t until I saw the excellent “Pigs V Cows” from Crazy Bricks over on Kickstarter that I was totally convinced about third party items and I backed it On offer where a range of custom molded heads in the shape of yes you guessed Pigs & Cows loving designed by Guy Himber he’s the brains behind Crazy Bricks and has worked on a few films you may have heard of (Check him out on IMBd) so the design behind these was second to none. I backed the project and my reward was a few heads of various sizes and colours I also added a few extras and then waited……

September and the items arrived and I was like a ….. “pig in Lego” the quality was excellent, one of my “extras” was my all custom Gingerbread Man he was packaged wielding two Brickarms weapons with added SPRINKLES he soon appeared in my next build Entitled  “Here’s Ginger” the collectible series Gingerbread figures from series 11 were no match for him and he managed to make crumbs out of quite a few of them.

Now it was time to build with the pigs heads. I carried on a theme I’d used before in The Butchers Shop only this time I reversed the roles and the customers became the food Don’t you just love those pigs !!

My next build using the pigs heads I just had to relive my childhood with a “Pigs In Space” themed build.

Oh did I mention the cats ?

So as you can see I had more than a little fun with these items and can highly recommend them for any non purist, sadly I haven’t been able to back anything else but Guy has some amazing items over on the Crazy Bricks website including a range of Mouse Guard Minifigures from the David Petersen book of the same name.

Now onto custom printed items As you know these are 100% Lego parts but printing is added by a third party all the items in the picture below are by the Printing Wizards at Firestar Toys HQ These can add those extra little details and finish to a MOC and don’t break the bank. The range of items available is getting bigger by the day as more companies have started printing there’s some weird and wonderful stuff out there.

Go On Make A Pig Of Yourself.

Here’s a build with both third party parts and printed items in it Can you spot them all ?

Lastly Mothers Day this features three of my favourite printed items The ZX Spectrum and C90 cassette both from Minifigme and the Speak & Spell from Firestar maybe I’m showing my age.

I hope this has given you a brief insight into what can be done with third party and printed items, if you haven’t tried them give them a go and if you don’t like them send them my way !

Until Next Time Happy Building and “Play Well”