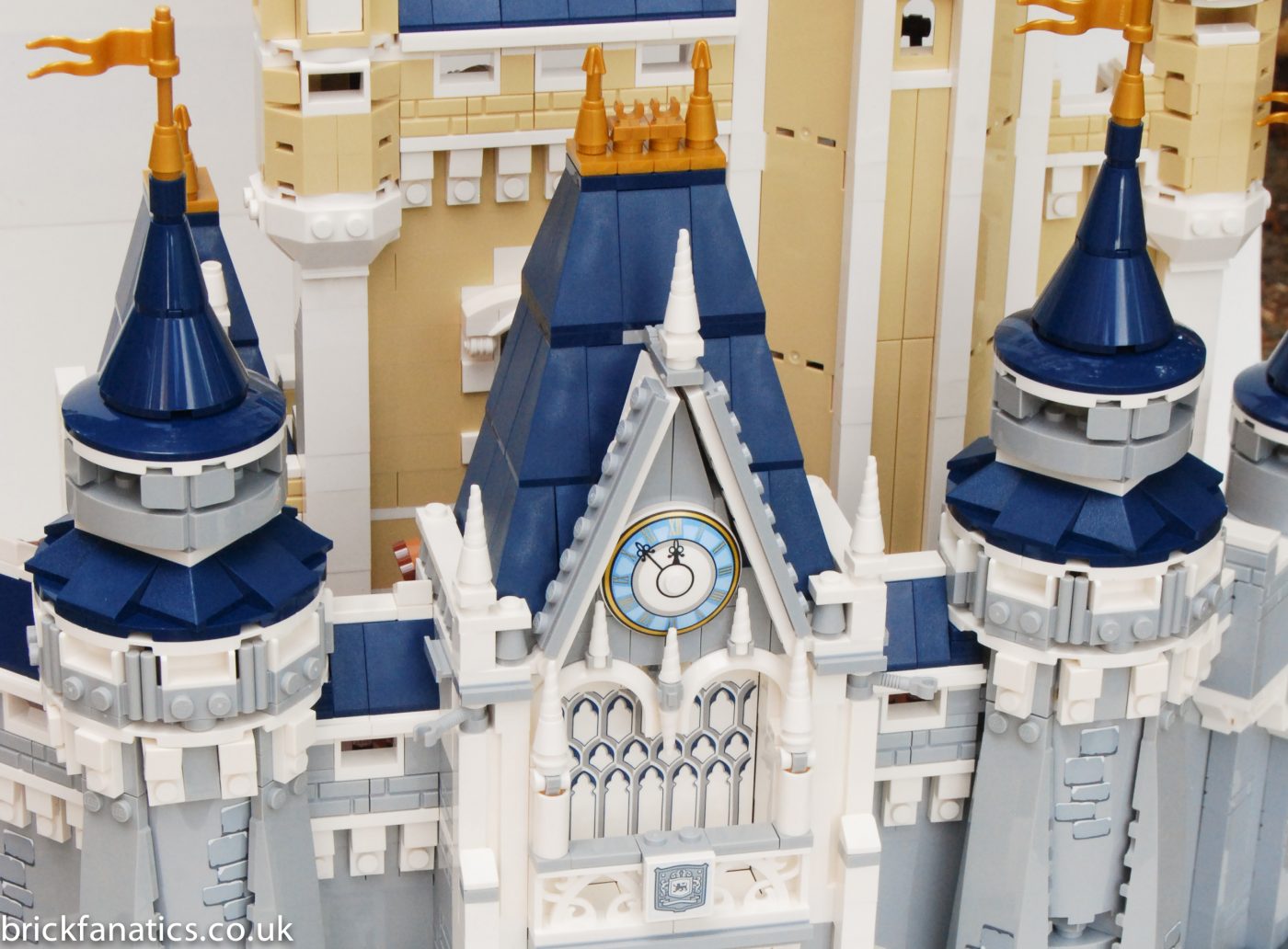 Those who love both Disney and LEGO have been hoping for some time that an AFOL-sized castle would come along – and now it’s here. But does it meet the high expectations fans will have?

The Disney Castle is extremely satisfying as a build, display piece and play toy (just ask my two happy girls who have not stopped playing with it). Disney lovers will find more than enough to sate them in the halls of 71040 which numerous homages. Architecture fans will delight in the many exquisite details from base to tower pinnacle. Those who have longed for a Disney doll house to act out their favourite character fantasies also need look no further. There are only a few small misses and some questionable minifigure selection.

The castle is built in three sections. The lower great hall, the main building, and the tall tower. Each section is constructed separately and then added to the ever growing build. The highlight of this set for me was the breath-taking building techniques that were used. This is a set that showcases how talented the professional LEGO designers are. There are aspects of this build that I could never have come up with if my life depended on it.

The great hall is the entire bottom of the castle. The base comes together quickly with the highlight being the inlaid dance floor. I am not sure if this is supposed to reference a specific scene from a given movie, there are many to choose from in the Disney pantheon, but it is beautiful thanks in no small part to NEXO KNIGHTS shield elements.

The gatehouse is the first location where the exquisite detail of this set really begins to come forth. Larger elements are shunned in favour of an ever more clever combination of arches, Unikitty horns and gorgeous dark blue slanted elements. The side walls are fairly plain, dressed up by a couple of stickers, but the angles they are set at required some truly innovative thinking. The mechanism for attaching them, multiple turntables of different sizes, was a revelation for me. I have built hundreds of sets, but I could not figure out what the designer was doing until the final step when it all clicked into place.

The final part of the lower third of the castle is the deck. This is an aspect of the castle which it is hard to get a sense of from the cover image. Those official images make it look like the tan section of the castle isn’t connected to the gatehouse and surrounding towers. This is not the case – there is a generous deck which forms the roof of the spacious great hall beneath.

The main building portion of the build is dedicated to a variety of Disney movie shout-outs including rooms referencing Beauty and the Beast, The Princess and the Frog, Fantasia, Cinderella, and Sleeping Beauty. Nothing about this part of the build is symmetrical which keeps it from growing monotonous – something many of these larger sets often struggle with.

The highlight of this section for me was the gorgeous architecture on the outside of the bedroom. The mix of windows, soaring towers and other small details were a delight to put together. The interior of the bedroom represents one of the few misses in this set – the bed is way too short. This would be understandable if it was undersized for just the included taller minifigures (Micky and Minnie’s ears make them noticeably taller than a standard figure) but any minifigure will struggle to fit in this bed.

While a few scenes are reserved for the final tower, the majority of movie references are contained within this section. These come in the form of props such as the Beast’s rose, a spinning wheel and a wizard’s hat next to a pair of brooms.

The tall tower on the actual Disney Castle is purposefully scaled down so that the structure looks larger than it actually is. This same contouring technique is used here. Despite the trick of the eye the tall tower showcases the most exquisite detail of the entire set, and that is saying something.

There are three rooms to the tower: lower, middle, and upper. The lower room contains what I consider another of the castle’s few misses. Twin stud shooters make up the castle’s only play feature: a firework launcher. While I recognize the iconic nature of fireworks over this castle they just look odd and provide an ugly pop of off colours in what is otherwise a consistent and beautiful colour scheme. I understand stud shooters in combat based sets, but here they are just going to get lost.

The middle room of the tower is the requisite Snow White easter egg with a mirror and apple, leaving the upper tower is empty. The pinnacle of the tower showcases one of the most beautiful details of the whole set – the golden peak. With the tower complete it is joined to the rest of the build at the prescribed location. This completes the build, over 4000 parts and 700 instructions steps later.

I am of split opinion on the minifigures included in this set. With the exception of Tinkerbell, these are all rehashes of the Collectible Minifigures counterparts of the characters included. Donald is an exact copy.

On the one hand, this is a wasted opportunity. Especially considering all the nods to Disney films, I would have loved to seen minifigure versions of characters referenced that to date we have only had mini-dolls of. Princesses like Jasmine, Auora, Belle, Cinderella, and Tiana would all have been right at home here and could have been produced without any new moulds. Of course, the mini-dolls will work just fine in the castle, so all is not lost.

On the other hand it makes some sense. Minifigures are the most expensive part of a set to produce and the price point of this one is in the stratosphere. Adding more cost for figures or taking away parts are both bad options. Furthermore, the complaint that often gets levelled against these larger sets is that they include figures that nobody can get without forking over huge amounts of cash. By simply repurposing existing figures with new decoration, the LEGO Group avoided this criticism.

The Disney Castle is as close to a work of art as we are likely ever to get in a LEGO set. Not since the Taj Mahal have we been gifted with such an exquisitely detailed set. Some sets can be sourced after the fact, this will not be one of them and I highly doubt that the LEGO Group is going to produce another Disney Castle for decades. The few criticisms of this set pale in comparison to its magnificence – so pick this one up while it’s on general release.

71040 Disney Castle is available to buy from the LEGO online store.

This product has been provided by the LEGO Group.