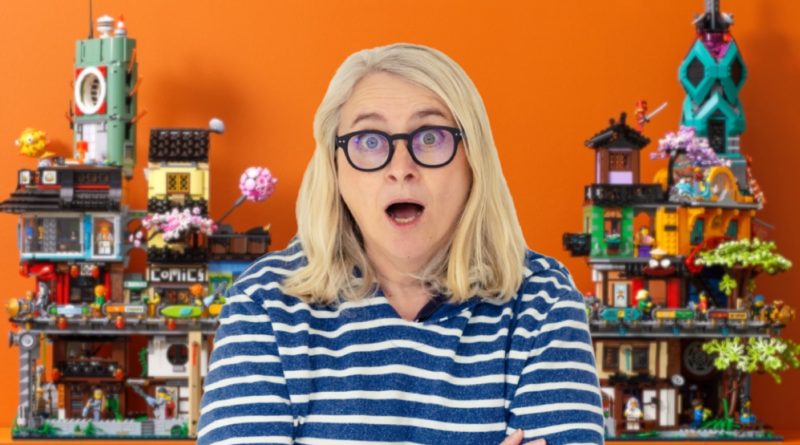 Author, screenwriter and adult fan of LEGO Emma Kennedy has a radical idea for LEGO fans: swapping your sets with friends.

Do you remember when you were a kid and you had a fistful of cards that smelled of bubble-gum that were pictures from Star Wars or Superman, and you stood in the playground, back up against a wall, negotiating swapsies with whoever you could find? It was a way of enjoying a mutual interest. I’ve got something you need and you’ve got something I need, so let’s share the love and everyone’s happy.

Sometimes it’s tough to share when you’re an adult, but at Relax With Bricks, we’ve decided to embrace the concept. I was idly recalling a now-defunct business, We Love Bricks, which was a rental service for LEGO: for a monthly subscription you’d pick your set, have it delivered, build it, send it back, repeat.

It was a brilliant way of getting the thrill of a build without having to purchase, but sadly the lady who ran it decided to shelve the business – and after an end-of-the-line fire-sale, that was it: We Love Bricks was no more.

In the course of remembering quite how much I’d loved the service, I came up with an idea. There’s lots of regulars at RWB who’d love to build but don’t have either the space or the budget to justify constant purchases, so why didn’t we set up a lending service between ourselves?

The idea was leapt on and within a matter of days, the Frog Exchange had been set up. If you’re wondering why we named it the Frog Exchange, it’s after the very first custom build I did on RWB – we’d just finished building 70620 NINJAGO City and had become convinced their economy ran on frogs, so I built the Frog Exchange, the hub of frog manufacturing. There was a lab where nefarious creations took place, a karaoke bar run by Ringo Starr, and a giant green Frog God pagoda at the top.

To get things going, I threw the recent Creator 3-in-1 31120 Medieval Castle into the mix, while other AFOLWACs (Adult Fans of LEGO Who Are Chums) put in 21318 Tree House, 71736 Boulder Blaster and 10275 Elf Club House, to name but a few. All of them are now winging their way across the world to be built, enjoyed and then passed on to the next name on the list.

It’s generated much joy and excitement, especially among members of the gang who don’t get to build at home. (There are lots of RWB regulars who simply watch.) The plan, moving forward, is that any set I build on RWB that is suitable for sharing multiple times will be sent skipping off into the glory of the Frog Exchange.

You can keep the set for as long as you want to enjoy it and when you’re done, you pass it on. All you have to do, when a new set goes on to the list, is to declare your interest in it and wait your turn. That’s it.

At present, access to the Frog Exchange is restricted to the AFOLWAC Gooses (the Patreon members of the gang), but if you have a group of LEGO-loving pals, it’s something you might consider doing. You could set up a small collective – perhaps four or five of you – and rotate sets between you.

Not all sets cry out to be kept on display forever, so instead of dismantling and sorting into your inevitably-well-labelled containers, why not tap into that bubble-gum-card-loving kid that’s deep down inside you and pass it on, in the certain knowledge that someone else in the group has a set you’d love to build, but maybe not keep?

There’s also a useful element of try before you buy: build it and see if you want to commit to a purchase. Every which way you look at it, it’s a lovely way to either share your LEGO or borrow someone else’s. So get going – chum up and start the swaps, and if you want to join our gang, you know where to find us.