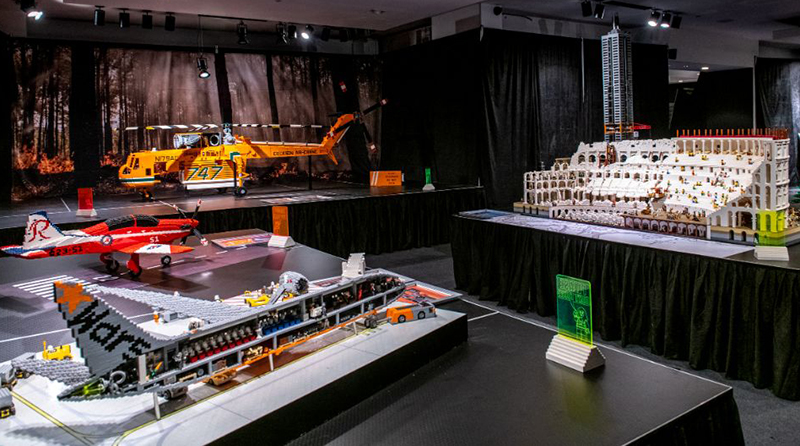 The Brickman Experience may have closed prematurely in Leicester, but in this exclusive walkthrough with Ryan McNaught, fans can still find out what went into the incredible LEGO exhibition

Unfortunately, due to restrictions to prevent the spread of coronavirus, The Brickman Experience has closed early during its UK debut in Leicester. The exhibition, featuring models from LEGO Certified Professional (LCP) Ryan McNaught, is an eclectic mix of impressive creations.

The next best thing to actually seeing the exhibit in person is hearing from the man behind it, so having already discussed his incredible Colosseum and Sydney Opera House builds, Ryan McNaught completes this exclusive tour of the exhibition…

“I am a bit of a plane nerd, I love my aeroplanes. so there is an airline in Australia called JetStar, so instead of JetStar we call them Death Star. They are ultimate low cost, think Ryanair, £2 a flight, but they charge you three quid for water. We had a big LEGO event up in Queensland, it was about a three hour flight from Melbourne up to there and they lost my luggage, I had all the LEGO for the LEGO event in the luggage, so I had to run this LEGO event with no LEGO. It was quite hilarious, so I made this as the revenge plot against Jetstar by calling them Death Star.

“I have gone for the cutaway and put all the Star Wars characters like Emperor Palpatine in first class, Darth Vader in business class, they are all in economy, poor Stormtroopers. We are not often able to do Star Wars and licensed models so it was a bit fun. Poor old Jar Jar stuck in the jet engine.

“We live in Melbourne, Australia, quite close to an airport and being a plane nerd it’s great, lots of stuff flying over the top and the Roulettes are our version of the Red Arrows in Australia. And so this is their plane that they use, this one has got some Power Functions in it.

“There is a certain point where curves and things don’t work, and a certain point where they do work, things like on the outside of that, this is where curves and things and everything works and the subtlety of things work, all these arches and round pieces and that kind of stuff works well at a certain, minifigure scale, when you go beyond that that’s where the standard brick really comes in and it can work a treat.

“Obviously a hot air balloon is a very difficult shape to make out of LEGO. My friend Robin Sather is the LCP in Canada, he is an amazing LEGO builder, he is like the DUPLO king of the world, so he made this amazing DUPLO hot air balloon. I’m like, ‘dude, if you can do that I have to do something too,’ so I wanted to do it, of course to throw the complexity in I wanted to do the twist of the colours –that is what made it really hard.

“We have our friend the X-wing, and like the helicopter it is designed to be hung from the roof. Whenever we do a licensed model, use any IP (intellectual property), getting conditions takes a long time and it is a bit of a process. Back when I did this 10 years we had to deal with Lucasfilm before Disney came along, and they were much easier to deal with – great, cool people and they were all LEGO nerds. We bounced back a few times through the design, they wanted to see this model built digitally before we actually did it for real, so this is a computer model. We had to do it once first, they had to sign off before we then went and built it out of LEGO.

“Designing digitally is getting more and more prevalent because the customer wants to see what it looks like before they commit to the big cheque, some of these models cost tens of thousands of dollars, so most of the time they want to see that upfront. If it is a regular customer or someone who knows what we are capable of doing, we can just go. We do all of the models in Asia Pacific for the LEGO Stores, so LEGO as a rule if it involves a minifig, because that is a trademark, they’ll want to see what it looks like so we have to do those digitally first.

“With the Space Shuttle, my wife is Canadian so I had to have the Canada arm, that is what it is all about. And again we wanted to show it in a different way so hang it upside down. Pretty cool.

“Then these ones here are from all other LCPs in the world. I asked them just to make something transport related from your country. Anything you like. Andy from Hong Kong did the Hong Kong ferry, Duncan did the bus, Sean did the bike in Singapore and so forth and so on. Everyone came up from something from their country.

“That was blown up to a photo for a giant billboard so that was built for a New York street scene. I like to put my little jokes in again, we have the Ritz and the Pits next door. Shane Warne the cricketer, he got in trouble back home because he ran over a cyclist, so I put him in there, that is the Seinfeld restaurant.

“The harbour bridge, I got challenged to build that one day on site at an event. So that’s the one that I built at an event. They kind of gave me an idea, you need these coloured bits and pieces, but it was a pretty big AFOL event so I had to go around scavenging parts from everyone, so there is a lot wrong with it but it ended up pretty good.

“I am not sure where the exhibition is going after this, it’s a bit of a leap of faith coming to the other side of the world – we have never done it before. It’s nice to be here.”

The Brickman Experience has closed prematurely due to measures to restrict the spread of coronavirus. Brick Fanatics will share news about it reopening or moving elsewhere as soon as is available.