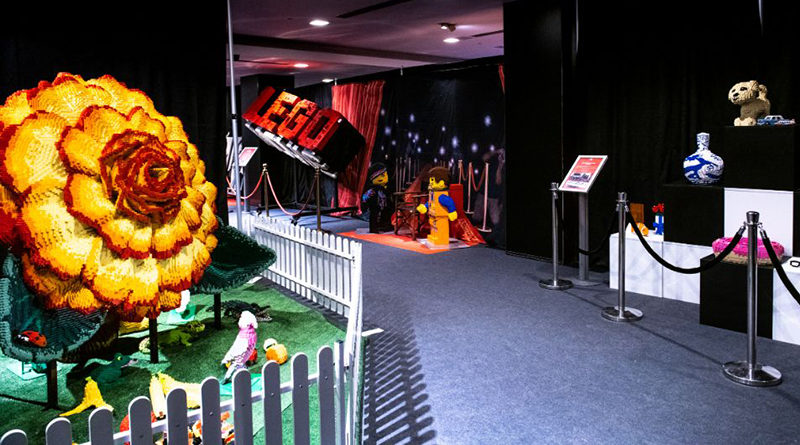 LEGO Certified Professional (LCP) Ryan McNaught has talked through some of the incredible models that make up The Brickman Experience in the first part of this tour, including the giant begonia, James Bond portraits and the Ferrari from Ferris Bueller’s Day Off.

The Brickman Experience, his first ever LEGO exhibition, has arrived in the UK for the first time and is located in Leicester’s Highcross Shopping Centre.

Ryan continues to showcase the models in the exhibition, with the tour picking up at a hands-on activity.

“Now this is what we call a mystery mosaic. The public get given a square and it has printed the colours for what the 1x1s should be and on the back is a number, which is where it goes on the board and eventually makes a  big picture. This one is finished, but basically people don’t know what it is that they are making and so we have quite a few that we go through, we always start with a full one then take it off and go for a different one. So that was part of the James Bond exhibit.

“Another one of our cutaways, Sydney Opera House, you have the outside and then get to see all the good stuff on the inside. Jabba is in the corporate box, and Zurg and Buzz – father and son come to the theatre, again I love doing those cutaways.

“This poor model here got really trashed on the trip over here so it has got quite a bit of damage, there is quite a bit of LEGO missing, it has got a big fracture, and I don’t have the parts to repair it unfortunately. Wherever this show goes next, I’ll bring the parts with me to do a decent repair on it, but yeah… the joys of LEGO.

“In terms of opera houses I have actually done four, this is the smallest of all of them, they have all been cut in half, the largest one is about three times this size, it is in Sydney, at the Museum of Sydney, it is part of an exhibition there. But the sheer difficulty of the compound curves, doing those, does my head in, they are so difficult to make, so I am really proud of the opera house as a model.

“When Jamie Berard came out we did a launch event at the Opera House, and so we both went on a behind-the-scenes tour. He was designing the set at the time and I was working on this project so the two of us were there for different reasons but the same reason.

“There is a company in Australia called LendLease, a big huge construction firm. We had to do this building for them for a photo campaign, they were using it for marketing and when we were finished, and they were really hopeless to deal with, they were very difficult, they were rude, they didn’t know what they wanted – so we changed their logo from Lendlease, and you can see round the outside, to Pretendlease. We struck our little bit of revenge, and that’s a bit of a tale, that’s quite a theme, through this exhibition. LEGO as an artform gives us a chance to have a bit of fun.

“This building here, my wife used to work in this building and they were doing some renovations. They asked for the model to be made for the foyer so I made the building. But I always have the jokes, so Scheister and Scheister financial planners and Bankrupt & Broke business advisors, again I like to put lots of funny little things into the models.

“Then we have the Colosseum here, this is in two halves, so we have 100AD when it was in its prime and of course the ruin that we have today. When I first build this model years ago, I got an email from some very irate Italian AFOLs. They were not happy that an Australian had built it as opposed to an Italian. So I thought I’ll strike revenge here a little bit and they said I had got a few things wrong on it, so I said, ‘I will take your feedback on board’.

“I made some changes, but I thought I will make it even more realistic so I’ve got the Gladiator charging €100 for a photo, scamming tourists like they do there, this lady has had her handbag stolen by this local here, in the Popemobile instead of his holiness we have Emperor Palpatine. We have a few little fun bits and pieces there.

“You can really see the two halves, how it was in its prime and how it is today. Again, this goes to that whole cutaway thing that I really love doing, it is an amazing storytelling technique. The rubble is actually really hard to do because our brain doesn’t do random very well, so you are really thinking quite hard on it. So yeah, this is actually a rebuild, the original version got trashed in transit, this is the second version. It is a better model than the first version, for sure. 100%. So it is very cathartic I think.”

Check back next week as the tour of The Brickman Experience continues.