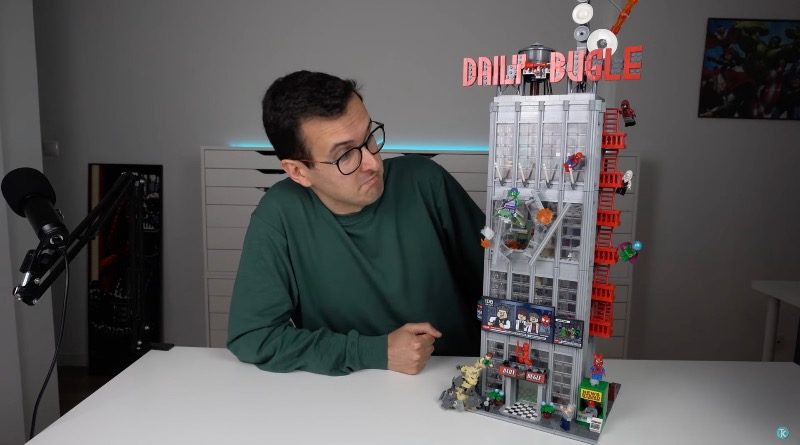 The first reviews of the newly-announced LEGO Marvel 76178 Daily Bugle are already starting to appear online, confirming the sprawling Spider-Man set is just as amazing as it looks.

Rumoured for months and finally revealed today, 76178 Daily Bugle represents some major milestones for the LEGO Group: not only is it the largest Marvel set ever by piece count (weighing in at 3,772 bricks), but it’s also the tallest (at 82cm) and includes the most minifigures seen in any Super Heroes set to date at 25.

It sounds great on paper, then, and looks even better in our extensive gallery of official images. Now, a handful of reviewers including ex-LEGO designer Tiago Catarino have already begun publishing in-depth verdicts on the £274.99 / $299.99 / €299.99 set online, giving us a first look at how the model comes together.

Tiago’s review, for instance, shows off plenty of the set’s finer details, including the universe-saving rat from Avengers: Endgame, a printed nod to Wilson Fisk, and the Technic connection points that allow it to be integrated into a modular building line-up (or wider LEGO city layout).

The YouTuber also points out a few of the set’s flaws, including an extensive sticker sheet, the requisite unnecessary Spider-vehicle, and some repetitive building. But in his view, they can’t hamper a set that otherwise lives up to all the titles it’s claimed.

“If we take the silly buggy, the 30 stickers and the repetitive glass builds out of the equation, the Daily Bugle is an awesome set – I dare say probably the best LEGO Marvel-inspired set the LEGO Group has ever produced,” Tiago summarises.

Check out the full review in the video above. 76178 Daily Bugle launches on May 26 for VIPs, ahead of a wider release on June 1.