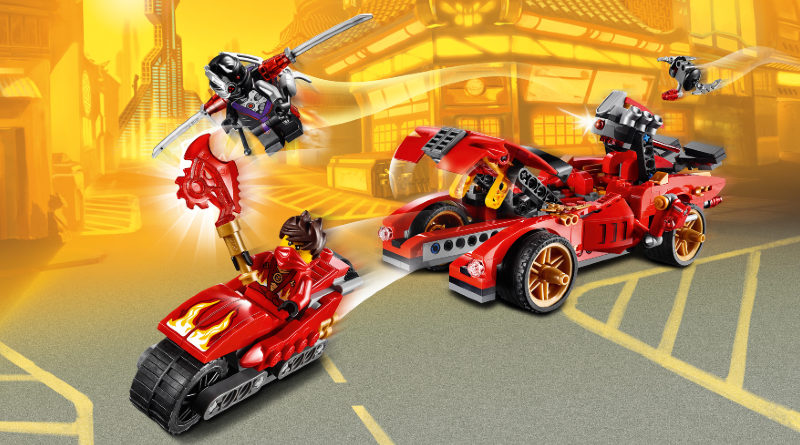 From boats that conquer the sea and sky to vehicles that can shoot motorbikes, LEGO NINJAGO has brought some of the most creative ideas into reality over the past 10 years of sets, but one in particular used to look very different.

70727 X-1 Ninja Charger released in 2014 as part of the Rebooted wave of sets. The main build was a red muscle car with an open-top and a hidden motorbike that could be ejected for a quick escape. But the model used to look vastly different than its final form, with one design featuring just three wheels and no motorbike function. Thanks to the LEGO Group for providing images of the concept models.

Unlike the rest of the models in the features in this series, the X-1 Ninja Charger had not one but eight concepts for the car, and three for the motorbike. Some of the designs went for a three-wheeled approach, always with a larger singular wheel at the back. It appears the LEGO designers back then weren’t happy with this choice however and decided to adopt a fourth wheel and apparently a much larger spoiler into the design.

The motorbike’s design always stayed relatively simple, with two of the three measuring four studs wide, much like the final model. It’s interesting to see just how many iterations this vehicle had to go through before a final design, with the overall look changing drastically.

70727 X-1 Ninja Charger then received a new NINJAGO Legacy version in 2021 with 71737 X-1 Ninja Charger, which also changed the design of the vehicle to make it less busy in appearance, while retaining the function of the ejecting motorbike. Interestingly, the design for the bike changed heavily in the 2021 model, suggesting that the design team still can’t decide on exactly how this model should look.