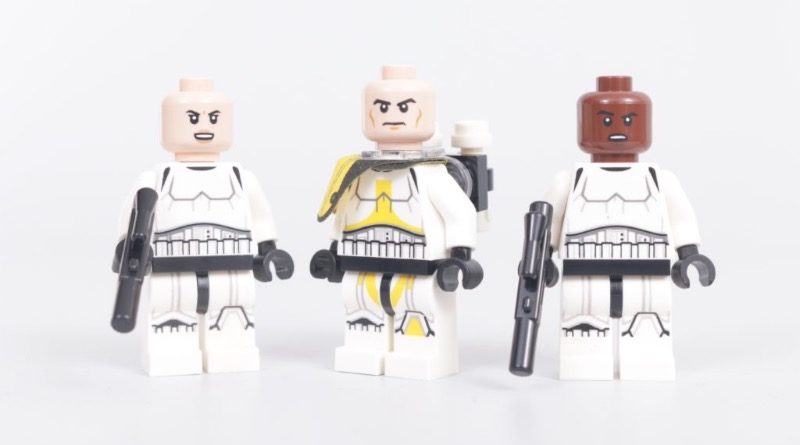 The newest batch of LEGO Star Wars Stormtrooper minifigures in 75311 Imperial Armored Marauder bring some healthy diversity to a galaxy far, far away.

For years, the LEGO Group has taken a one-size-fits-all approach to its Stormtrooper minifigure legions: first they had all-yellow heads; then they moved to all-black; next was the standard ‘angry Clone Trooper’ face; and finally, last year’s 75290 Mos Eisley Cantina saw both Sandtroopers given individual – but still generic – face prints.

The newly-revealed 75311 Imperial Armored Marauder changes all that by offering three completely different heads for its included Stormtroopers and Artillery Stormtrooper, with a welcome mix of race and gender represented across that trio of minifigures.

Yes, one of them is the standard Bruce Wayne face spotted in any number of sets, but the other two bring female and dark-skinned soldiers to the fore. That’s a hugely welcome change of pace simply because of the variety and options it opens up within LEGO Star Wars sets, but also because of the diversity it introduces to our Imperial armies.

Of course, the Empire in Star Wars was symbolic of fascism, exemplified by the innately human bias in its ranks. And female Stormtroopers weren’t seen on screen until the sequel trilogy, so you could technically say that representing classic, original trilogy Stormtroopers with the same standard face wasn’t entirely inappropriate.

By the time of The Mandalorian, though, the galaxy has moved forward – even if only by dint of limited resources, as the last remnants of the Empire flail around in the post-Return of the Jedi landscape. And that makes the three troopers in 75311 Imperial Armored Marauder not only welcome from a collector’s perspective, but probably more accurate, too.

To that end, we’re not expecting to suddenly see classic Stormtrooper ranks given the same kind of diverse treatment in future models, but at least we can (hopefully) look forward to a wider range of face prints sitting under those dual-moulded helmets.

For more on 75311 Imperial Armored Marauder, check out our early, in-depth review. You’ll be able to pick up the 478-piece set for yourself from August 1, alongside the rest of this summer’s LEGO Star Wars wave.