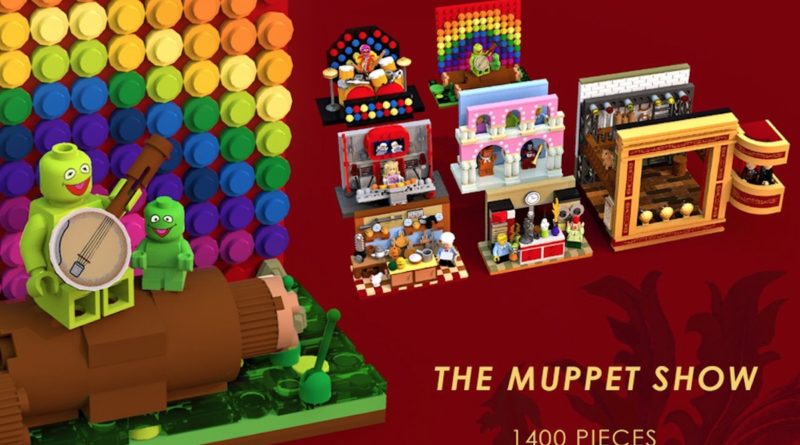 With the upcoming launch of LEGO 71033 The Muppets Collectible Minifigures, now’s the time for a LEGO The Muppets modular building.

The LEGO Group is celebrating 15 years of LEGO Modular Buildings this year and recently released a video focusing on the history of the sets. There are also rumours of a potential LEGO Marvel Doctor Strange Sanctum Sanctorum due out in 2022, although the LEGO Group has yet to confirm that possibility.

Now that 71033 The Muppets Collectible Minifigures and 71035 The Muppets 6 pack are both being released tomorrow, could we see a potential LEGO modular building based on the popular characters at some point? Whilst this is just pure fan-speculation for now, we’re holding out hope for a LEGO The Muppets Theater set in the future, a model that could be packed with all sorts of fun nods to the beloved show.

When the original The Muppet Show debuted in 1976, the series was set in a dilapidated old vaudeville house that had seen better days. The show featured a variety of wacky Muppet acts taking to the stage (to both applause and heckling), while a stressed-out Kermit the Frog tried to wrangle guest stars and all kinds of bizarre characters backstage.

With so many memorable sets, acts and locations to choose from, a LEGO The Muppets Theater modular building could be full of really great construction opportunities. That’s also what LEGO builder Ivan Guerrero thought back in 2017 when he submitted his own The Muppet Show creation to LEGO Ideas. Guerrero was the creator behind LEGO Ideas 21324 123 Sesame Street, so he certainly knows a few things about the world of Jim Henson’s creations.

Although the The Muppet Show set didn’t receive the official greenlight, it’s clear that not only was the creator a huge fan of the characters, but the show’s setting offered a glimpse at the many possibilities for a LEGO The Muppets Theater. Highlights included the main stage, Waldorf and Statler’s box, plus small sets for the show’s opening titles, Pigs in Space, Animal’s drum kit, Muppet Labs and the Swedish Chef’s kitchen.

Not strictly a modular building per se, the LEGO Muppets Show submission was more of a series of miniature playsets based around the theater location. However, what’s also interesting about this particular LEGO Ideas set is the inclusion of 13 fan-made The Muppets minifigures with accessories, many of which bear a striking resemblance to those included in the latest CMF series.

Coincidentally, LEGO Friends 41714 Andrea’s Theater School was recently revealed, with the set having more than a passing resemblance to The Muppets Theater. We suspect quite a few fans of The Muppets will picking up that set and customising it to become the perfect display piece for their collection of LEGO Jim Henson characters.

71033 The Muppets Collectible Minifigures and 71035 The Muppets 6 pack are due to be released tomorrow, May 1, and will be available from LEGO.com and in stores.