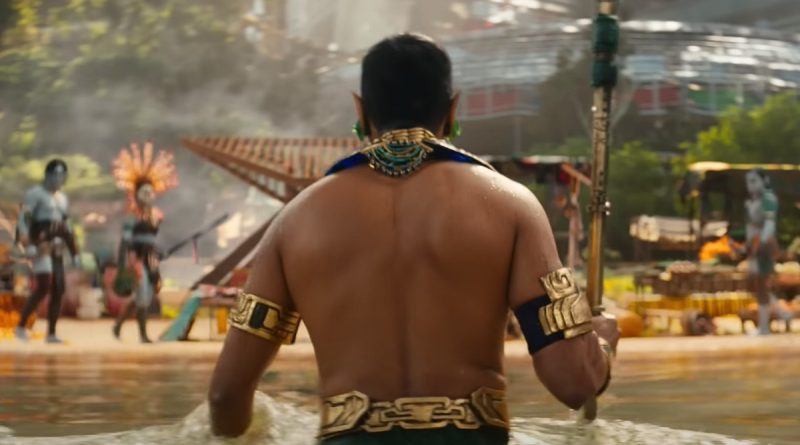 We now have our first full look at the sequel to Black Panther in what looks to be an emotional movie following the tragic passing of Chadwick Boseman and consequently T’Challa in the MCU. The teaser pays tribute to the actor with a mural and what looks to be a funeral or celebration scene.

However, one of the biggest reveals in this trailer was the debut of Namor, who has been revealed to be portrayed by Tenoch Huerta. So far, it seems that Namor will be an antagonist in the film as his people battle Wakanda. For those who are unfamiliar, in the comics, Namor is the King of Atlantis with the power of super strength, flight with wings on his feet, healing when in water and more thanks to him being a combination of mutant and Atlantean.

How this will translate to the MCU is not yet known though mutants were recently confirmed as a part of the movie universe in Ms. Marvel, though we won’t say how for the sake of spoilers. Other notable moments in the teaser include Atlanteans on the surface and someone wearing the Black Panther suit, likely taking up the mantle following T’Challa.

Current rumours for LEGO sets based on this film include the following:

While these reported sets should be taken with caution, it seems plausible that Namor would be included as a minifigure with his debut in the film in any Black Panther: Wakanda Forever models. More Black Panther sets have recently been teased for the future but it’s yet known whether or not they are based on the new film.

You can watch, or re-watch, the trailer by clicking on the link above to help count down the days until Black Panther: Wakanda Forever launches on November 11, 2022. You can also catch up on all the Marvel news by clicking here for the live-action projects and here for the animated series.