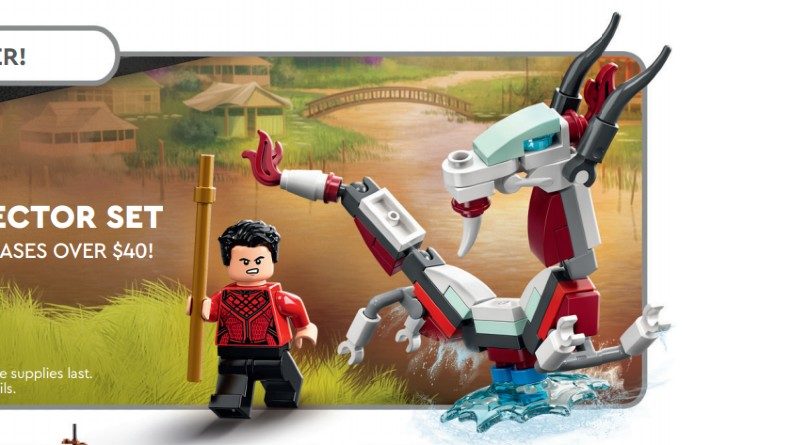 The LEGO Group has released an updated store calendar for August 2021, revealing new sets, offers and free gifts coming our way next month.

Top of the list is LEGO Ideas 40487 Sailboat Adventure, another gift-with-purchase based on a concept by a fan designer. Yan Chevalier’s contest-winning Sailing Ship Adventure follows 40448 Vintage Car in that regard, but is set at a much higher spend threshold of $200 in the US. As with the majority of GWPs, expect parity across GBP and Euros.

VIP members will have first dibs on the freebie from August 1 through 3, while everyone else will be able to grab it from August 4 through 29 – or while stocks last, if indeed any stock does remain after the VIP period. (GWPs have been known to sell out that quickly – it really just depends how many the LEGO Group produces.)

Spending $40 (or presumably £40 / €40) on Marvel sets, meanwhile, will net you a Shang-Chi and the Legend of the Ten Rings polybag, as previously reported following the appearance of 30454 Shang-Chi and the Great Protector at LEGO.com.

You’ve got from August 1 to 15 to cop that one, while both bigger sets based on the movie – 76176 Escape from The Ten Rings and 76177 Battle at the Ancient Village – will launch on August 2 in the UK and Europe, which feels like good timing.

August is also a bumper month for LEGO Super Mario, with a fresh wave of Expansion Packs, Power-Up Packs and Character Packs arriving alongside 71387 Adventures with Luigi Starter Course. From August 16 through September 5, 30389 Fuzzy & Mushroom Platform will be free with a $40 spend (again, you can assume £40 / €40 if this also pops up in the UK and Europe) on Super Mario products.

LEGO Classic is also getting a rare gift-with-purchase, in the form of a DK Books release titled ‘Masters’ Book of Secrets’. You’ll need to spend $60 on LEGO Classic products to learn those secrets, but you’ve got the entire month of August to do so (or at least while stocks last). Finally, the blue VIP keychain is still available to new VIP members until the end of the year.

While these deals are confirmed for the US in August, we don’t yet know whether all of them will be coming to other regions. 40487 Sailboat Adventure at least seems like a sure thing, though, so set your alarms for Sunday, August 1…