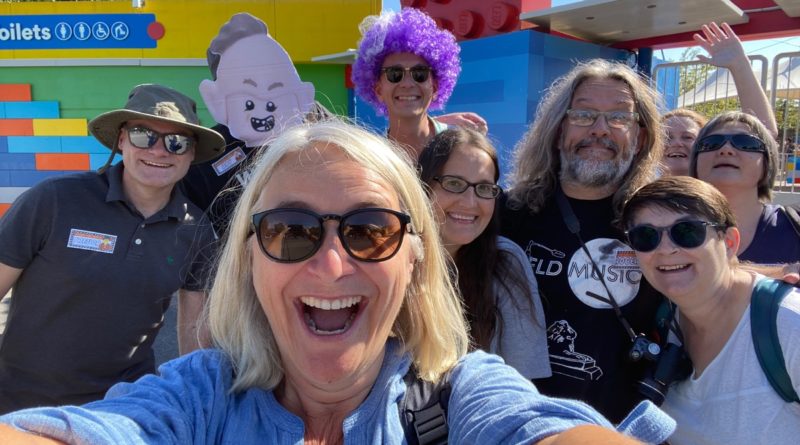 Author, screenwriter and adult fan of LEGO Emma Kennedy proves you don’t need kids in tow to have a great day out at LEGOLAND.

There’s an unspoken rule that you can only go to LEGOLAND if you have at least one ice cream-smeared child dragging off you by two sticky hands. It’s a rule that doesn’t seem to apply to any other theme park. Casually mention you’re thinking of going, and any non-AFOL will narrow their eyes and ask you: “But whose children are you taking?”, as if you’ve suddenly turned into a Brown Owl or a Scout Leader or someone who enjoys escorting schoolchildren on day trips.

But at Relax with Bricks, we like to smash up the rulebook with the Hammer of Thor, chuck the pieces into the air and vaporise them. Rules, schmules. We shall go to LEGOLAND and there shall not be a child in sight.

We’ve been planning an AFOLWAC (Adult Fans of LEGO Who Are Chums) day trip for some time, and given we’re all madly in love with LEGO, there was only ever going to be one choice. One day we will cross the seas and journey to our personal Valhalla, the LEGO House at Billund, but until that blessed day, we would travel via bus, train and car to the hallowed halls of LEGOLAND Windsor. It would test the waters, serve as a delightful amuse bouche, and allow us to meet each other in the actual flesh for the first time.

“Are you really not taking any children?” my neighbour asked me.

“There shall be no children,” I replied, arms folded, sunglasses on, because sometimes, serious day trips need serious plans of action, which mostly involve going on all the really good rides that some children cry on and working out, with military precision, just how long nine adults are going to need in the LEGO shop at the end.

To say we were a giddy crew was an understatement. There was jumping up and down, hugs (remember them?), mild screaming and a few happy tears. Here we were, at long last, standing in front of the toilets taking a selfie. We’d only gone and done it. We were at LEGOLAND, the sun was shining and all we had holding on to us were rucksacks filled with packed lunch. It was already bliss and we hadn’t even gone in yet.

There’s something liberating about a day trip for adults. You can saunter about at your own pace, change your mind, stick googly eyes on posters (what? Who did that?), not worry about sudden plumes of vomit (more on that in a moment) and eat as much ice cream as you damn well please, but for me the greatest joy was finally meeting people who became an online family during lockdown.

They are the AFOLWACs who had found me and stuck with me; the members of the gang I chatted about each and every day; the backbone of everything we have created in our small but perfectly-formed corner of the internet, where adults who love LEGO are allowed to express themselves, be creative and learn how to play again.

If you’re an adult who loves LEGO, you don’t need a child to go to LEGOLAND. All you need is like-minded pals who will adore every giant minifigure, every brightly-coloured model, every brick of Miniland and think nothing of debating how many LEGOLAND-exclusive sets it’s acceptable to go home with. (Answer: it’s as many as you can sneak in through the front door, stupid.)

There are VIP experiences you can enjoy that are much better suited to grown-ups than little ones: we were surprised by being gifted an exclusive visit to the Model Workshop and a hosted tour of Miniland (thank you, Dawn French, you’re a stone cold darling). We got soaking wet on the log flume and didn’t care, we laughed ‘til our chests hurt on The Dragon, and every single one of us, without exception, had the best day out. It was glorious.

Word to the wise: you need 45 minutes in the shop at the end, and don’t, whatever you do, if you’re worried about plumes of vomit, go on the Haunted House ride.

4 thoughts on “Yes, you can (and should!) go to LEGOLAND without kids”