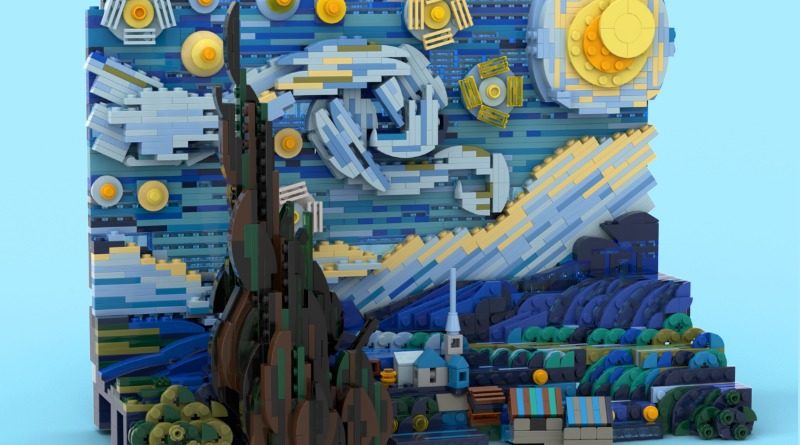 A store on AliExpress is already selling a knock-off version of the newly-announced LEGO Ideas project Vincent van Gogh: The Starry Night.

The LEGO Group revealed that Truman Cheng’s design would become a future Ideas set only yesterday, but ‘pleasure shopping blocks toy Store’ has wasted no time in rushing a knock-off set to market.

Curiously, the AliExpress listing includes images of seemingly two different models: one that’s directly copied from Cheng’s design (perhaps even going so far as to lift his original images and simply adjust the colour), alongside a smaller and more simplified version.

Things get even more mysterious when you factor in the piece count: the knock-off version apparently contains 1,830 parts, yet Cheng states on his project page that his design only uses 1,552 elements.

That all suggests that the AliExpress seller’s rendition of The Starry Night is unlikely to be exactly the same as Cheng’s, but it’s clearly still ripping off the Ideas creator’s design – and in turn (now that it’s been approved), presumably infringing on the LEGO Group’s copyright.

Perhaps what’s most surprising about this story, though, is just how quickly this seller – who already has knock-off versions of Guillaume Roussel’s The Earth Globe and Steve Guinness’s Typewriter for sale – has managed to push out a version of Cheng’s design.

By contrast, we can expect the official LEGO Ideas version to hit shelves in 2022, with at least another seven Ideas sets ahead of it in the queue – including 21326 Winnie the Pooh, Home Alone, Seinfeld and the Legendary Stratocaster.