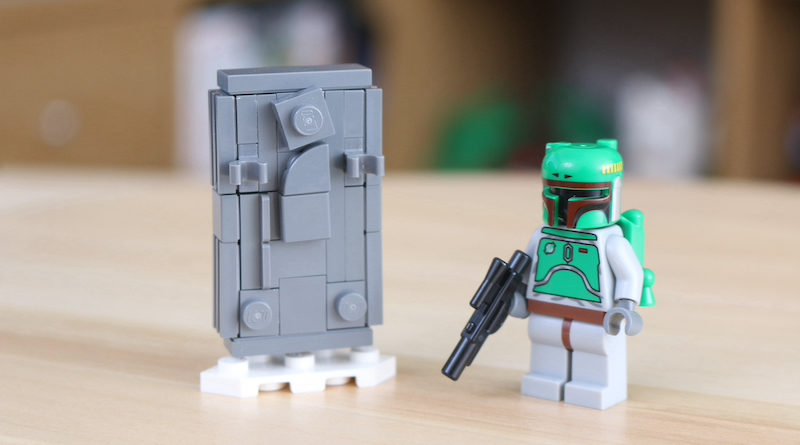 Learn how to build a custom LEGO Star Wars Han Solo in Carbonite model to add some brick charm to a certain bounty hunter’s favourite trophy.

One of the most iconic moments in Star Wars: The Empire Strikes Back is when Han Solo is frozen in carbonite by Darth Vader and taken away to Jabba’s palace by Boba Fett. It coined one of the most famous exchanges uttered in the franchise’s history, between Han and Leia, and the image of Solo frozen in that metal box remains one of the most memorable too.

The LEGO Group has produced a couple of versions of Han Solo in carbonite. Back in 2000, the frozen smuggler was represented by a printed brick, which appeared in a total of four sets over a six-year period. After that came a moulded single piece, released in 2010, that remains today as the LEGO template for Captain Solo’s fate. This version also inspired a metal keychain released at the back end of 2020.

If you’re after a brick-built version, though, with a blockier charm to it, look no further than our own build.

Want a parts list? Watch this space… Brick Fanatics will be making parts lists available for builds where possible.

After the parts list? We distribute parts lists to our models free of charge and exclusively through our newsletter in .xml format. You can upload these .xml files to BrickLink, where all the pieces required to recreate the model will be listed, as well as available for purchase from a selection of vendors based around the world.

Aside from receiving free access to all our parts lists once created, there are many reasons to sign up to the Brick Fanatics newsletter. To sign up, enter your email address at the ‘Brick Fanatics Newsletter’ box situated in the sidebar and select a preferred region (though sign-ups are open worldwide).

Support the work that Brick Fanatics does by signing up to our newsletter or by purchasing your LEGO through one of our affiliate links.